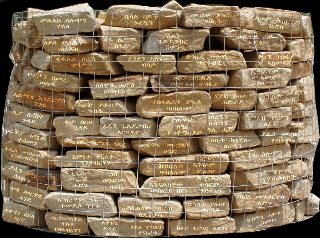 We got an outside view of the infamous prison of Era-ero when Awate.com gave us an aerial view of it. And with Radio Wegaheta’s extensive interview with the veteran, Eyob Bahta, who served as a guard of the same notorious dungeon, a huge hole in the secretly held gulags of Eritrea was cut and their inner workings were revealed for the public. The cruelty, horror, and absolute secrecy surrounding the prison were for some of us not unexpected. After all, weren’t the prisons for political prisoners in Sahel and other parts of Eritrea under the EPLF identical to the one at Era-ero, save for the differences in the confinement cells and the years the victims were held . Dissidents in Sahel were kept in fox-hole below the ground, and were spared the relatively long years of detention that has become the norm at Era-ero. No alem bekagn for them, they were systematically murdered.

In the sealed political environment of Sahel, dissidents were either summarily executed, or were detained and killed after a long public relations campaign. At Era-ero, on the other hand, the regime has chosen to do likewise without the use of firing squads. Both the valleys of Sahel and the low hills close to the Semhar lowlands, where Era-ero is located, are also extremely hot and inhospitable. The fox-hole-like dungeons were understandably hotter.

In the age of scarcity, the enterprising guerrilla organization chose to utilize trench holes to indefinitely hold political dissidents; something that the EPLF zealously guarded from even the most senior of its political leadership. They were instead escorted to visit the “wonders” of the hospitals built in the river valleys. These fox holes were the precursors of the ubiquitous containers now holding hundreds of prisoners.

During the week of Good Friday or H’mamate Christos of the late April, many millions of Christians were either fasting or abstaining from luxurious activities. They first grieved and then rejoiced after the resurrection of the Son of God who is believed to have died for the sins of mankind. “Bejana Halifu“ as they somberly put it. Close to the same week, the attention of some Eritreans was welded to the long and harrowing story narrated by a former Tsebah fighter, who was later retained as a guard for the maximum prison of the political elite of the regime. The tally for the dead (out of 35) around 15, and 9 critically sick and disabled were made public.

The latter were deemed so harmless that the cruel regime left them without handcuffs. They have been left loose within the vicinity of the compound. Among the living dead is Durue. Under Mengistu, at the old Sembel prison, he had access to books and an eye sight good enough to help him climb the walls to freedom. So much for the ghedli way of “justice” that was deafening some of the gull bile’s senses. It was simply a slow and deliberate act of murder. Nonetheless, there is an irony in the simple and honest story of the brave guard.

The causes of deaths/murders were numerous: while a few committed suicide, the large majority died from the long years of detention, extremely inhospitable prison conditions, and wanton neglect of medical help. The document does its own harm when the guard, time and again, announces the obituary with the word tesewi’u, although he admits the intent and design of their incarceration was to kill them. One feels, however, a very bitter aftertaste, when Eyob on every occasion employs the word martyrdom. This religious term, often used in Abrahamic religions, has been abused by the misfits who later turned as “liberators.”

This word-corrupting practice has another damaging effect too. Like all totalitarian and millenarian type of movements, our domestic types have also cunningly used this old word to confer some nobleness for all the innocents who died harnessed to their successive wars. After having kept the death of the tens of the thousands of fighters, ghedli finally decided to make it public: couched in the name of martyrdom. The disingenuous use of this term minimized the magnitude of the slaughter and, consequently, the grief of the public. Contemptuous of the public, the regime that deemed the Badme war “stupid” does not hesitate to call the canon fodders: martyrs. But the bigger tragedy is the wide acceptance and diffusion of the word martyrdom by the public.

And alarmingly, the avowed opposition movements in the Diaspora are the major culprits. Have we not often witnessed them conferring martyrdom to people who died from long sickness, and simply of old age (our Eritrean standard.) The most fatal aspect of the wide use of this term is in the realm of justice. What is considered an act of naked murder in other normal and rational societies loses its meaning and efficacy when couched with the word martyrdom.

Clearly, it was the lingo of the 20th century social engineering. If the resistance to the regime is to be effective and coherent the time for discarding the expression is pressing. Any democratization project must begin with it! We do not wish any future wars, but if they occur let the unfortunate victims be described as people who were killed or fell in war. After all everybody dies alone, and the collective use of the phrase “Bejana Halifom” is mendacious. It is a lapel pin from a conformist society forced upon the departed souls.