This story was published on BBC Tigrinya on 8 Mar 2022

Asmarino.com developed the story by talking to Bisrat

“International Women’s Day holds a special place in my heart.  I observe the day not only because it is important to celebrate the achievements of women but also it asserts the spiritual rapport that I have with my unjustly imprisoned sister” said Bisrat Fissehatsion.

“She was a real champion of women’s rights … now I can say that very day rubs salt in my wound by evoking old memories!” she said mournfully.

Bisrat talks about the storm clouds gathering over her, and yet she refers to her sister as light.  “March 8 is not meant to be a sad day; but somehow it creates a storm in my heart now” she added.

“There is no use pretending there will be a happy ending to my sister’s ordeal … it is such a cheating situation she is in … how the days go slowly now; it feels as if I am being relentlessly followed by her shadow”, she mused.

“Apart from the fact that Eritrea is awash with negatives, I still remember her optimistic traits. I do not know how she always managed to focus on the bright side of life. She would never take anybody’s name in vain. Moreover, I remember her special gift of listening to people’s problems without being judgemental.  Simply put, I have never met anyone like her.

“In her interchanges she would point out the bright future that awaited Eritrea, and our obligations as citizens to make that a reality. She would frequently mention the rights and responsibilities of women towards our national endeavours. She would always couple her arguments with the contributions female fighters made in the battlefields of Eritrea” recalls Bisrat.

“As I reprocess her old arguments and all her goodwill, I pause to ask myself how time was able to break that magic spell.

“Now I catch myself in a state of stunned confusion when I revisit all those themes she cared about ... Eritrea’s budding bright future, the great opportunities Eritrea had in store for its citizens and so forth. All the hard work seemed to have gone up in a puff of smoke” she said emphatically.

Bisrat said that times have changed for the worse. All she sees, according to her, are betrayed promises, broken dreams, and copious misery in post-independence Eritrea.  Was Aster wrong or was she simply misled? Perhaps her goodness got the better of her.

“When I look back and think about Aster I do not only see her contributions to the Eritrean cause; I also have come to realise how much she meant to me as a sister. She was my best friend, confidant and soul mate.

“In 1974, when she headed off to the countryside to join the front, her absence created a major vacuum in my life. Quietly, I had to absorb the grief and move on” said Bisrat as she cast her mind back to that incident.

Journey to the Battlefield

During the seventies many young Eritreans devoted themselves body and soul to the cause. From many towns and villages young people were leaving home in droves to join the front by ignoring the dangers in becoming freedom fighters.  Their parents were compelled to remain quiet and composed to ward off the attention of security forces.

The Eritrean society was noticeably changing at the time. Stomachs in knots, many of the parents quietly went bankrupt; in many cases they were simply left to their own devices. They witnessed their own flesh and blood fall for peer pressure. It was tough for parents as they saw the young influence one another and ran away from home.

“Aster, after staying with me in Addis Ababa for a couple of weeks, flew back to Asmara”, said Bisrat. A few days later Aster called her sister to bid her farewell for she was going to join the front the next day.  Bisrat recalls that excruciating moment as she remained transfixed looking at the receiver.

Bisrat was later informed how her sister snuck out that very morning she left home for good.  “The event took place early in the morning before the rest of the family woke up,” she said.

“She had a rolled gabi, a hand woven woollen blanket, in her arm as she furtively and stealthy opened the door. Suddenly she came face-to-face with Haregu who was sweeping the courtyard. She asked Aster where she was going so early in the morning. Aster replied she was going to church with her friends. The suspicious domestic asked Aster why she was taking her mum’s gabi, to which she answered that it was very cold inside the church in the morning. Then Aster headed straight for the gate and walked out.

“Haregu decided to follow her; but by the time she opened the gate to sneak a look, Aster had already disappeared by turning around the corner” Bisrat added.

“I later found out that Aster had planned the getaway with two of her best friends – Selam Tewolde and Hiwet Zemikiel. After their rendezvous they headed towards Akria, went past Adi Nefas and reached R’esi Mdri’.”

It is strange to look back and weigh what happened to the three friends in post-independence Eritrea.  Aster ended up in jail, Hiwet defected (after independence) and now lives in the US/Africa.  And Selam migrated to the Netherlands due to health reasons during the armed struggle.  And she stayed there ever since. After independence she never returned to Eritrea except for brief visits.

“All three, after a lifetime of selfless service to EPLF are rendered irrelevant … yes, like disposable commodities” underscored Bisrat.

To go back to the story, on the day Aster ran away, according to Bisrat’s account, her mother became very wary and anxious. Aster did not return from church all day.  Late in the evening she checked with the parents of her friends. After she learned both Hiwet and Selam were also missing then she understood what had happened.

“In my current condition, the thing that frequently comes to haunt me is the day Aster left to join the front. Mind you, Aster was just a teenager and the light of our lives; and the rest of the family came to grieve when she disappeared from our lives – masked grief, that was” Bisrat divulged.

Aster was in secondary school when she started intermixing with underground activities. Members of her group were reading secretly distributed pamphlets, mobilising secret cells, collecting money for the cause and meeting urban freedom fighters clandestinely.

Bisrat could not let go of her sister’s memory.  She described Aster once again as a people’s person; someone who respected close and distant relatives.  “Everyone loved her.  She was invariably courteous and soft-spoken.  Her one-to-one chats were pleasant. Moreover, she was a principled person with a steely inner strength.”

Bisrat recollected how their father was fond of Aster.  She recalled how Aster spoke to father as if he were her friend. She made him laugh. At times she would even dance for him, Bisrat remembered. By the same token, Aster would ask for pocket money without batting an eyelid.  We were envious of her clever and daring ways.

Aster fought alongside her fellow combatants for 17 years. Bisrat said that every combatant knew Aster. She also said that her sister had a special gift – the ability to remember.  She knew most of the fighters who passed through her department – the front’s training centre.

Aster married a fellow combatant by the name of Mahmoud Ahmed Sherifo and gave birth to her son Ibrahim.  Thank goodness, both came back to independent Asmara in 1991.

“But independence brought its own calamities when it averted from our martyrs’ promises … ‘the revolution started eating its own children’ one by one.  Aster became the target of the power hungry and ruling clique” said Bisrat with acrimony.  Aster, one of the most prominent proponents of the revolution and one of the first female fighters who sacrificed her life to the cause ended up becoming its victim” stated Bisrat.

On 18 Sep, 2001 she was taken in by government agents just because she signed a letter to the president that called for reforms, constitutional rule, and transfer of power to the people. 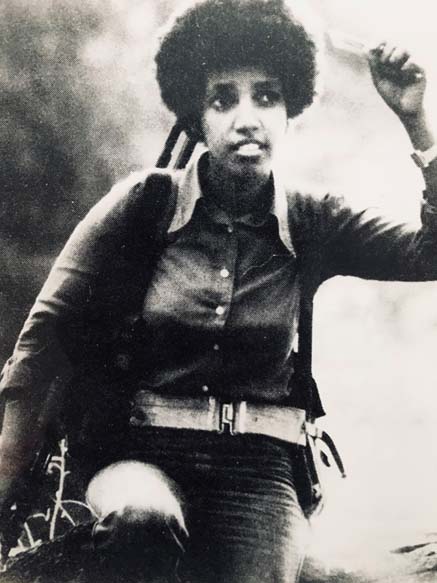 The Agony of Incarceration

It has been 21 years since the unjust incarceration of Aster. No one knows her whereabouts; actually no one knows if she is still alive.

At this time Aster is one of the most famous prisoners of conscience in the world. Amnesty International, Human Rights Watch and many more human rights institutions have campaigned for her release persistently.

“During one Christmas season” said Bisrat, “I had received over 5,000 cards of support through the campaign Amnesty International launched.”

Indeed, Aster’s story has been broadcast on many national televisions in the West.  It has also been presented on various radio stations, printed on major newspapers reports, periodicals and church programmes. Eritrean social media have also been filled by various stories of Aster and other victims of the government.

Bisrat addresses the evils of imprisonment in a poignant way.  “Aster’s imprisonment affects me and many others. My sister is a member of a family, she belongs to friendship networks which are also experiencing the consequences of incarceration – we all are living in the shadow of her incarceration” she said. She added that the pain is excruciating.

“This shows me, having witnessed my sister’s predicament”, Bisrat said, “not only politics but life in Eritrea is very bleak.”

Bisrat did not stop there. She mentioned the incalculable price that Eritreans paid for the cause. Eritreans abandoned their properties, families, spouses, work places, studies in order to liberate Eritrea. Many died and many more were wounded in the battlefields. She said it was paradoxical to witness that thousands of ex-fighters, after liberation, were excluded, frozen, imprisoned and exiled.

“I never expected to witness such cruelties. My expectations were totally different. That is what prompts me to say that life in Eritrea is totally bleak”, added Bisrat.

“I do not want to immerse myself into politics; Eritreans have their own answers why their country, after thirty years of bloody armed struggle, is in the situation it finds itself now. Let me focus on the story of my sister here.

“I know the imprisonment of Aster and her fellow ex-fighters has changed the story of Eritrea. Look at how our communities everywhere are divided. Many have registered the injustice that is prevalent in the country. We can clearly see this trend by measuring the outflow v. inflow of people to the country” Bisrat stated.

She went on to explain why her planned return to the country was disrupted. “No one returned to Eritrea after independence” she emphasised.  “I left Eritrea back in the seventies; and there were tens of thousands of us who left home then, and we are still living in our host countries. None of us opted to return to Eritrea.  Even the PFDJ members, those who belong to the government’s party, have decided to stay out of Eritrea. What a shame!” she asserted. She said that tells the real story of Eritrea – that is how bad things are in Eritrea – a country that has produced more refugees in post-independence era.

“The importance of Aster’s voice – regarding equality, justice, democracy - has become clearer to me after she was muzzled” said Bisrat.

In conclusion, by stressing that Aster’s dreams are still alive, Bisrat said the light that is shining on her sister’s cell is being registered by more and more Eritreans.

Despite the public outcry, Aster remains in custody cut off from contact.  She never had a day in court.

Asmarino.com wishes Aster, wherever she is, a memorable Women’s Day 2022.