There are two parts to this posting. The second part is report by The Washington File on Ambassador Girma’s speech in the National Press Club on 26 May, 2004, under the title Eritrea Values Anti-Terrorism Partnership With US, articulating his nation’s full support for an all out war against Iraq and Al Qaeda. The first part is an Asmarino editorial that tries to put this speech in its proper context under the title of Then and Now. 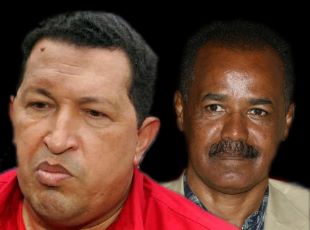 Listening to the anti-US vitriolic that has become the signature of all the monotonous rumblings of the Eritrean totalitarian leader, Isaias Afwerki, the government media (Shabait.com, Shaebia.com, Eritrean profile, EriTv, etc) and his supporters’ websites (Dehai.org, Alenaki.com, Meskerem.com, etc.), one would think that there is some kind of principle driving their stand. Especially given the “anti-imperialism” tone that their rhetoric has taken, one would think, however misconstrued their stand happens to be, there is an ideology behind it. There is this often visited theme of the US trying to dominate Africa and the Middle East that they love to regurgitate. With his relentless assault against anything that is remotely Western, be it homelessness in Western cities or democratic elections in the US, there is no doubt that Isaias wants to pass as the Hugo Chavez or Fidel Castro of the region. Much as we disagree with the latter two leaders, there is one thing we can not accuse them of: inconsistency. They have been consistently anti-US. For better or worse, they have stuck to their guns from the very beginning. In the hands of the unpredictable, erratic and principle-less regime in Eritrea though, anything goes is the norm. One day, it is zealously behind whatever the US does; the next day, it goes all out against it. There is no better example than its reaction to the Iraqi invasion to elaborate on this phenomenon.

These days, there is nothing better than mention of the “evidence” that implicates the Eritrean regime in its sponsorship of all kinds of terrorism in the region, in general, and Somalia, in particular, to trigger all kinds of fake outrage from the regime’s supporters. “Where are the evidences?” – as the semi-literate president puts it – has become their rallying cry. Put within the Iraqi context, the Eritrean president gleefully points out the fact that weapons of mass destruction have not been found. The insinuation is clear; he is trying to say, so is it in the case of Eritrea. Given the self-appointed role of Hugo Chavez that he is playing now, one would expect that he had always been with the “oppressed people” of the Arab world and Africa from the beginning. Well, don’t hold your breathe.

As early as 2004, Eritrea had a hard line stand against anything that was Islamist or Arabist, most of all Al Qaeda and Iraq. Here is how Girma Asmerom, the Eritrean Ambassador to EU, put it in his speech regarding Eritrea’s total support of US in its fight against terrorism and Iraq: "… it [Eritrea] stands ready to assist the United States in any way it can. It has offered among other things its resources including the use of its facilities along its 1,200 kilometer strategic Red Sea coastline, two major deep-water ports in Assab and Massawa and the new airport near the port of Massawa that can accommodate any size airplane, blanket flyover rights and the sharing of intelligence."

Ambassador Asmerom didn’t stop there; he went on to brag that Eritrea was "the first African country to join the coalition of the willing'."

Asmerom even tried to be more hawkish than the Bush administration in his proposal for the need to finish off the “unfinished job” and advised that the Bush administration should do it “without equivocation”: "The decision taken by the Bush Administration to complete an unfinished job [Iraq] is very much welcome....The task is indeed one of completing an unfinished job for the sake of the stability and security of the Middle East and the permanent removal of a serious threat without losing another opportunity. In this vein, Eritrea continues to maintain that the necessary measures must be taken without equivocation."

Boy, boy! The Ambassador didn’t mice any words then. Not only was Eritrea for all out war against Iraq, it was also willing to accommodate the US in any way it can. But now, if you visit Shabait.com or Dehai.org, there is a total amnesia of those years and; instead, it is all out war against America. And among the regime’s supporters, the level of their Eritreanism is now measured by how much anti-American they can be.

For the unprincipled PFDJ (the ruling party in Eritrea), both its unequivocal support for the US fight against terrorism a few years back and its equally unequivocal support for Al Shabaab, Al Qaeda’s affiliate in the Horn of Africa, now has a simple rationale behind it: how to stretch its days of reign, so that it could go on terrorizing its people without any interference from inside and outside. Nothing else matters to this totalitarian regime.

For an extended report on Eritrea’s stand in 2004, read below.

Amb. G. Asmerom speaks of "noble cause" at NPC

Washington -- Eritrea's Ambassador Girma Asmerom wants Americans to know that his country places great value on its anti-terrorism partnership with the United States and plans to do all in its power to support President Bush's efforts to build a worldwide coalition against killer networks like al Qaeda.

Speaking at a National Press Club "Newsmaker" program May 26, Ambassador Asmerom told journalists, "In line with our commitment and contributions to fight terrorism, Eritrea sees itself as linked with the world and the United States in the noble cause to defeat fundamentalism and global terrorism."

Asmerom noted the problem is not new to Eritrea, where "wanton acts of terrorism that destroy lives and property and undermine development have been occurring since 1991." No, he said, the country has become a target for "al Qaeda and other terrorist groups...to attempt to infiltrate Eritrea's borders."

The diplomat said al Qaeda networks "were responsible for the ruthless and brutal murder of five Belgian tourists in 1996 and more recently, the murder of British mining expert Timothy Nutt in Bisha near the Sudanese border in April 2003 and the bombing of a hotel in Tessenei in 2004."

"Eritrea knows how determined and vicious these ruthless murderers are," he said, "and we encourage our partners to stay the course in these difficult times."

Eritrea has translated words to actions, Asmerom explained, making it clear on several occasions that "it stands ready to assist the United States in any way it can. It has offered among other things its resources including the use of its facilities along its 1,200 kilometer strategic Red Sea coastline, two major deep-water ports in Assab and Massawa and the new airport near the port of Massawa that can accommodate any size airplane, blanket flyover rights and the sharing of intelligence."

Holding the door open for even greater cooperative efforts, the diplomat said, "I can say Eritrea stands willing to share the burden and success of this fight [on terrorism] and that on the basis of mutual interest and respect, we are willing to do even more."

President Bush defined the burden during a major policy speech at the Army War College May 24, in which he recounted the acts of terrorism that have afflicted the world in the last three years, intending "to shock, frighten and demoralize civilized nations, hoping we will retreat from the world and give them free rein."

In response, Bush asserted, "We did not seek this war on terror, but this is the world as we find it. We must keep our focus. We must do our duty. History is moving, and it will tend toward hope, or tend toward tragedy."

Emphasizing his country's role in the struggle, Asmerom reminded his audience that Eritrea was "the first African country to join the coalition of the willing'" that the United States put together to defeat Afghanistan's Taliban regime, which had harbored al Qaeda killers.

The diplomat quoted from a letter his Government sent to the White House when it made it's choice to back America that said, "The decision taken by the Bush Administration to complete an unfinished job [Iraq] is very much welcome....The task is indeed one of completing an unfinished job for the sake of the stability and security of the Middle East and the permanent removal of a serious threat without losing another opportunity. In this vein, Eritrea continues to maintain that the necessary measures must be taken without equivocation."

(The Washington File is a product of the Bureau of International Information Programs, U.S. Department of State. Web site: http://usinfo.state.gov)