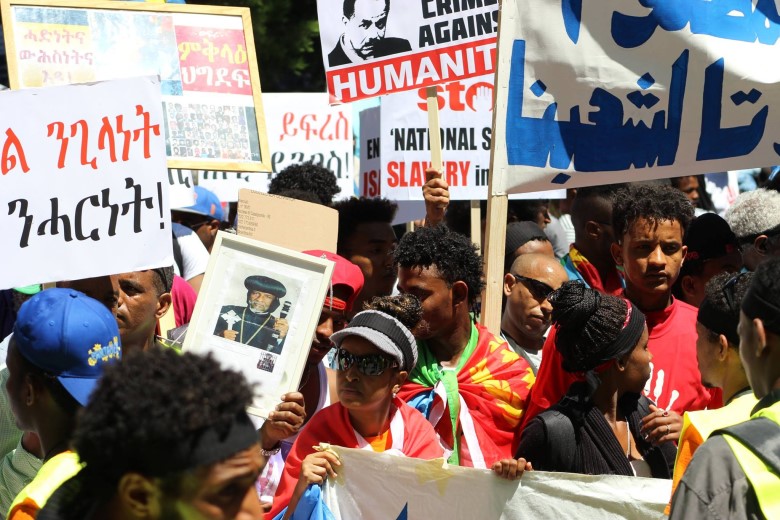 The time was around 12 clock 23 June 2016, some of us from UK were on our way to the park near the city centre of Geneva where the march to the office of UNHCR was due to begin.   On the way I met Aida Kidane from Sweden – with her camera.    She was hastily walking through the route of the march in order to secure a convenient spot to take video.  I joined her in the walk until we find a spot   convenient enough for her to take video for documentation.

After we waited for about 40 minutes there came a roaring voices of a mass of people.   Until then the area was quite, all traffic was diverted away from the route. From afar, we saw police on motorbikes leading the march – with blue flickering lights.  We said here come our people, the justice seekers.

I was overwhelmed with excitement to observe a sea of people mostly the youth marching and oozing out slogans with passion.  The mother of all slogans was “Bring the dictator, Isaias Afeworki, to the International court of justice.” There were many slogans as well such as “release the Orthodox Patriarch” whose photo was highly visible “Release the veteran women fighters, the 2 asters, Miriam Hagos and Senait Debesai   and the thousands of innocent prisoners of conscience.   What they are calling for had a profound honest ring for it rests on the gross abuse the Eritrean people are experiencing in the hands of the repressive regime. All these abuses   gave rise to the influx of huge number of refugees to exile. On the journey they got exposed to all kind of dangers including death in the desert sands and in the Mediterranean Sea.     In the United Kingdom The ordinary people were so horrified seeing drowning refugees they staged many demonstrations asking their government to open their doors to the refugees particularly those  stranded in Calais/France (the Jungle)  living  in small tents with no running water, electricity,  in sub-human conditions.

The city of Geneva – was hailed as historical place that hosted the big Eritrean demonstration and goes down to the annals of Eritreans history. In recognition there was a slogan which goes, “Viva Geneva”. After justice prevails and the Eritrean people are empowered I hope Switzerland will be one of the partner countries in the economic and social rehabilitation of Eritrea.

All these successes are  the fruits of the relentless advocacy carried out by the Eritrean human rights organisations, and the international sister organisations such as  Amnesty International, human Rights watch, journalists without borders and Christian Solidarity World Wide (CSW).   There was also a huge contribution by women, youth   and other Eritrean civil societies known as Justice Seekers.   The repressive regime of Eritrea was unequivocally exposed long time ago and is defined as   “Africa’s North Korea. “ The UN commission finding has confirmed   the gross human rights violations taking place in Eritrea.  The Geneva demonstration was carried out to convey message of support and transmit the voice of the voiceless prosecuted in Eritrea in front of the UN human rights head quarter in Geneva.

These being the truth I wonder why the supporters of the repressive regime of Eritrea demonstrated on 21 June 2016.  Is it to deny that there are no prisoners of conscience - veteran disabled fighters are not massacred in cold blood – editors of private newspapers are not jailed?   Do they believe there was no murder in Asmara recently, no massacre in Adi   Segdo Prison?   Do it mean they deny the existence of 10,000 innocent people who have not been tried in the court of law languishing in 360 prisons?  Does it means the life of all these people do not matter?  Are they disposable?  On the contrary for all peace and justice loving people the world over and definitely for Eritrean Justice Seekers in diaspora their life matters, even one life illegally taken away by the repressive regime in Eritrean matters a lot.

By condoning repression, the supporters   failed miserably to share the pains and sufferings of the prisoner’s families, their children their spouses and friends. In short the supporters own people.   The wives of those imprisoned had a hard life in bringing up their children on their own as single parents.    I met Shoa, the wife of Ermias Debesai (papaya) and I have learned the hard life she had to explain to his   2 children why their father is not visiting them. In the demonstration there was Abie Seyoum the daughters of the photographer and journalist   Seyoum Tsehaye and his cousin Vanessa Berhe.  Also Semhar the daughter of the war-hero Brigadier General and commander of the Eritrean Air force Habtezion Hadgu. And Hanna the daughter of Petros Solomon.   (  to be expanded in part 2)

For the people of Switzerland to watch such vibrant demonstration carried out by Africans in a European city Geneva/ Switzerland- is quite unprecedented. The passers-by stop and stare with admiration on the power of mobilization of the organisers. They watched the demonstration with amazement seeing a sea of people mostly young men and women carrying banners and waving flags of countries they came from including Canada and the United States of America.  I have never seen like this before. The demonstration was unforgettable that goes down to the annals of Eritrean history in the making.  The Eritrean people and also those who are with us in spirit and following the even in the media are experiencing profound inspiration. The Eritrean revolutionary spirit is getting awakened but and big but we have to seize the momentum and come up with forward/ strategic action plan properly structured with an inbuilt division of work. A plan that can create new possibility for Eritrean life to live in dignity peace with ourselves and our neighbours. To build a system of governance that respects rule of law, freedom of expression and human rights.

At the end of the demonstration,   the programme was to go to the big park near the Geneva airport for food, entertainment and informal and formal discussions.  However the police refused to use the park explaining that the park can only accommodate 6000 people and they are overwhelmed by more than 12,000 Eritreans and it is a security risk.  The victorious demonstrators scattered everywhere in the city and occupied every small park and crowded in many restaurants and tea shops that gave the city centre a festive atmosphere deemed to be an Eritrean Quarter in Switzerland in the heart of Europe.

To be continues in part 2 :  La Luta Continua -  Awot N’Hafash