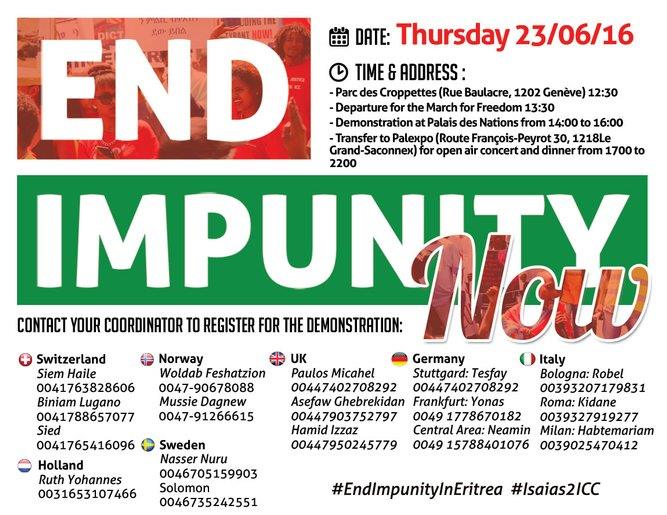 On the 23rd of June 2016 Eritreans will march in solidarity supporting the UN Commission of Inquiry report that concluded crimes against humanity are being perpetrated in Eritrea with the full knowledge of the country’s ‘leaders’, inevitability the next step is for the perpetrators to be made to account for their heinous actions… for the victims to have some restitution and for the country to begin to heal from this traumatic present and venture into a hopeful future. What Eritrean in their right mind opposes this?

This rally in Geneva is no longer the victims anguished cry of yesteryears… this is actually a victorious roar of those who persevered with the resistance through thick and thin and the rest of us who have joined them over the years… all the way through to the very young… the very resourceful and talented. The path that was set by the ELF veterans and their compatriots from EPLF who joined in the years after 2001 is now perfected by their children and grand children (literally), it sounds different, it looks different but feels exactly the same.

… numbers…. Who doesn’t remember when we were told we are in the minority… that can never be said about the Eritrean Resistance any longer… the  young people in Tel Aviv can easily pull a crowd of 8 -10 K on most days (the last time they gathered it was estimated at a staggering 15k)… the Geneva rally last year stood at 5K and we are anticipating more this year (5 coaches full from Frankfhurt another five from Italy… the list goes up every time I look)…the New York and Addis rallies last year were also in thousands in a few short years we have mobilised tens of thousands of Eritreans that liberated themselves from the grips of pfdj and are willing to stand up for justice… be counted standing up and pay any price there is to pay…. Now that is something to be proud of!

…the prowess at the tip of the Resistance’s fingers is also something awesome… young people who call you from your facebook accounts and turn the few concepts you have been bouncing into a full-blown strategy and deliver results in a few days time. Give you a projected analysis of the final outcome and use their network of parents, grandparents uncles and aunts to actualise plans…. I sit and marvel at the speed with which things move and the amount of technology and know how deployed.

Dedication is the unseen force that is fusing the movement together… the number of older activists, professionals, academics and artists that agree to be interviewed, filmed and taken pictures of to encourage others is heartening. The video clips are accessed by thousands overshadowing any mobilisation by pfdj. The Resistance has a voice… a strong and compelling voice.

Admittedly these are simple, baby  steps of getting to know how to work with diversity in all its manifestations, to produce a united and formidable voice… and so there are gasps, hiccups and audible sighs often (sometimes too often for my liking)… but everywhere I look I see examples of solidarity building where not too long ago there was plenty bridge burning and the casualty of all this bridge building has (I think) resulted in rendering much of pfdj’s well practiced tools impotent.

In Geneva there will be a rally and then in the early evening there will be a solidarity event of us coming together as a community to share our common vision and to practice living in tomorrow’s just Eritrea where everyone has a stake… pfdj free…. Fear free, exile free and war mongering free…