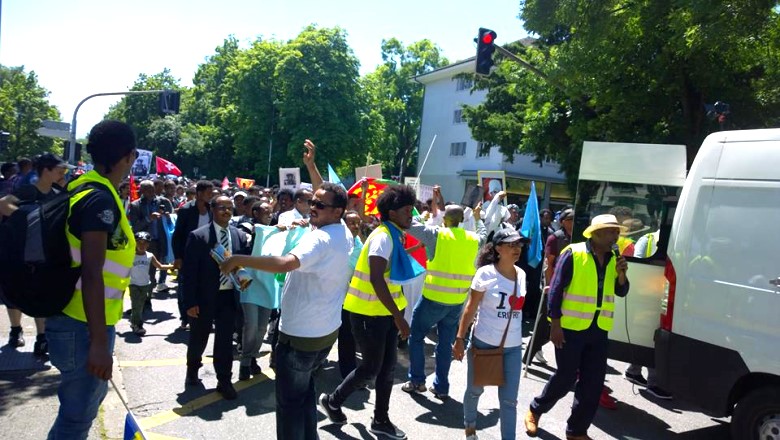 A force mightier that ICC

For weeks I had a kind of knot in my belly… you know the sort don’t you? Will we really get there? Will we make a meaningful contribution to ending impunity in Eritrea? We had an impossibly tall task of overcoming  hurdle after hurdle in a bid to making a difference in Eritrea.

On the one hand was the unimaginably unrealistic expectation placed on us… by desperate people who want a swift change… who have come to believe that they are unable to bring it about, so we should… they are waiting.  And every time we meet… every time  we rally… every time we are heard… they hope… sometimes they hope far too much and this is a great burden on us… particularly given the odds that are stuck against us… both our own failure to rise to the challenge and the seemingly insurmountable challenges that seem to grow with each passing year.

On the other hand there was the little to no expectations we had of ourselves… often inadvertently…for why else would we have spent years in many dead-end ventures? we never felt or acted like anything hinged on us… that we could make or break the Eritrean reality… at best we just did things that made us look a bit different to the ‘silent majority’ and the extremely selfish minority…

Even when we were moving mountains and dismantling fear it never felt like that… when we were building bridges and mending channels it felt the opposite and the loud and clear message inside each of us never seemed to register a decibel higher than a faint feeble echo….

Everyone who knows me knows how much I love weddings… I am addicted to the good-will and the shared effort of creating magic and living it for just one day… so rather characteristically it was a wedding analogy that described it best for me last week too… an 1898 compilation of English folklore reciting; ‘In this country an old couplet directs that the bride shall wear: "Something old, something new, Something borrowed, something blue."

Old were the somewhat familiar songs that a brother from France sang… they were the songs of the legendary Yemane Baria… and the song Natsnet in particular drove me to tears even as my heart sored with an addictive cocktail of hope, pride and determination… a new generation of activists was singing the old song and really meaning it… I was singing and having flashforwards too… we will sing that song on the ashes of Era Ero… and karsheli and all the other dungions… and it will be our victory cry… (and I am going to actually lobby for it to be our national anthem too!)…. Never have I seen so many of us soar so high on the wings of an old song… hope was palpable…. Hell no!  we didn’t  just keep hope alive we actually captured it and made it potent!

New… were ናይ ሕማመይ,  the skinny-jeans clad curly-haired super-slim young people, who were singing the loudest… they are the new Eritrea…. The hope of our movement as well as the reason we are fighting to the bitter end…. There is nothing pfdj hasn’t done to this generation of unfortunate Eritreans… scarred beyond their young age… hardened yonder than the few years of their existence should afford and unimaginably wizened… for me it was difficult to meet their gaze and still hold my head up… if anyone wants to see how much we have failed as a society all one’s got to do is look one ናይ ሕማመይ in the eye and try and explain how we got here…. These are the boys who have seen it all and can’t be told any different about pfdj’s ills… on Thursday it was nice to see the hope in their wizened eyes too… to see their pride in being able to stand up in solidarity with fellow Eritreans and share the same pride of having a positive influence… for the few hours we were marching singing and chanting together they weren’t the victims… they weren’t the hapless refugees and they most certainly weren’t useless… they were proud Eritreans together with over 15,000 others singing ብርሃን ኮነ… their religious leaders were there… the people who know better (or atleast should know better) were there too… their counterparts born to a more fortunate fate were standing shoulder to shoulder with them… we were a people and not a fragmenting old fabric being torn apart from every angle… we were a people and we are responsible for their welfare… we were their safty net… they won’t fall into the abyss… they will be caught by their people…!

ICC was borrowed… ‘Issias to ICC!’ was a rally cry borrowed for brevity… a short hand for ‘let’s end the culture of impunity’… a herald that Eritreans will no longer look down as they are trampled upon… we will do what it takes to make the perpetrators face what is coming to them… no one is going to escape… not even DIA… and we will make sure of that… Ideally we would do it in our own land but if it is not possible a borrowed court serving justice will be will do…. One thing is for sure though… WE WILL NOT STOP UNTIL WE SEE JUSTICE SERVED!!…. Them days of impunity are gone from our land forever…!!

Blue was ofcourse the flag… it was everywhere carried with pride and dignity… not with the garish vulgarity that pfdj supporters do it but with utter dignity and sober respect. A single united (almost spontaneous) act that restored pride in the old activists (freedom fighters) and stranded four generations of Eritreans together…with it our Resistance found a symbol… an identity… and one rooted in history and with legacy…

…me and my friends were after all not the useless generation that didn’t live upto the expectation of our martyrs… we too have a story of ‘against all odds’ all of our own to tell… now we can see the young ናይ ሕማመይ in the eyes and tell them we were late but not too late after all… and this is a weapon more potent than ICC! It is a double edged sword that will ensure that the past is avenged and the future shaped… the Eritrea that our people deserve will indeed become a reality!