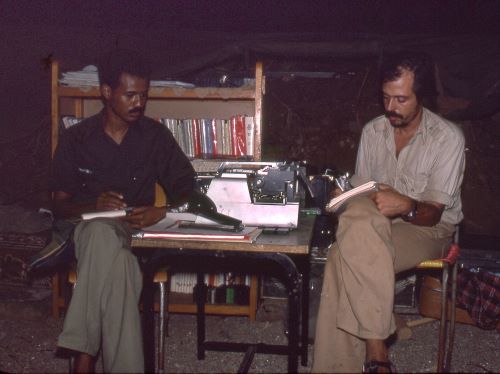 there seems to wallow a wonky architecture

like a stage to ponder an image of the uncertain future

if there be one,

kind of ensconce on earth or heaven far from hell.

Isn’t it wonder for life to look alike a venture?

However for the bigger target to emulate an independence structure

a mystic culture termed  war or you name it whatever

from churches, mosques or temples

so that martyrdom to bless its beatification.

Daringly  -war-  a specialty process of killing and annihilation

where everybody will prosper

albeit its destructive nature.

Moreover in the dreams of post-war

future to arrive to history and to the Eritrea of now

the name ‘Isaias’ of a leader for life

who in his 70ies frequents short sleeved street walks

head of a country that fans hostilities in serial,

has evolved gradually and incredibly

into a seemingly incurable chronic disorder

or a bias of mass paralysis of ideas.

Simply or mainly confused by phobia

about a notion of cohabitation

with history’s renowned kingdom of Abyssinia.

an island may be across Mediterranean

or somewhere underneath Lampedusan waters

of the millennium of transparency and  the era of globalization.

in a style as primitive as evening stars foretell

about tales of crossing the Red sea

or the biblical voyage of Moses across the Sinai deserts

through the scary modern Bodewin cottages

that harbor boxes of human kidneys and hearts, indeed

to be traded in black markets of organ transplants.

All happening for nothing but to verify how genocide reigns

per independence and self-reliance fantasia

God forbid as if final outcomes

of tussles to resolve life’s puzzles

mismatch expectations of an emerging nation

the end in sight may look like Tasmanian fight.

Where national insecurity of no fertility, no morality and no prosperity

which is clear and white of a systemic twilight.