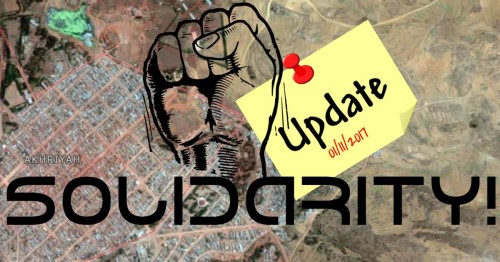 Activists from yesterday’s protest are sending a call for national unity against pfdj actions on religious schools.

In an impassioned appeal for unity across all faiths the activists stated, ‘unsurprisingly the regime is attempting to taint this as a religious move aimed at asserting Moslem dominance in the country.

However neither the actions of the government in closing religious schools not the actions yesterday were about one religious group. There were Christians protestors on the streets yesterday and some are actually in prison alongside their Moslem brothers.

Yesterday at the mosque we made it clear that our issues are issues of freedom and liberty and not confined to religion or one religious group. In fact what must be clear is that the schools shut include the Catholic school in at the Cathedral as well as the Orthodox school at Enda Mariam . we are all victims of the same persecution and yesterday we stood up against them together. We appeal to all our brothers and sisters to continue to stand in solidarity and reject any attempts to divide and paly us against each other.’

Arbi harnet commends the unity with which Eritreans across the globe have stood up to pfdj yesterday and appeals for on-going unity as we stand in solidarity with our people  inside Eritrea.