D. Forest Meier - The Federal Council confirmed cases of home traveling Eritrean refugees. Now the law is to be tightened. 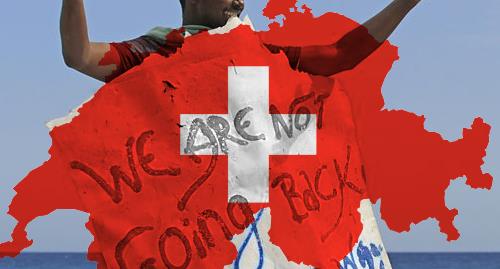 The rumors were there for some time: Eritrean refugees to travel back to their home country to get married or to celebrate the national holiday. Now confirmed the Federal Council that since 2015 seven cases were uncovered of illegal trips to the homeland.The persons concerned had refugee status revoked and been deprived of the status of asylum, the government writes in its reply to a question from SVP National Councillor Céline Amaudruz.

The law prohibits recognized refugees travel to the home country.Sets the Border Guard an offense established, it makes a notification to the Secretary of State for Migration. Now the law is to be strengthened to improve the enforceability of the travel ban.

"Only the tip of the iceberg"

Confirmed feels SVP National Thomas Aeschi who has traveled Eritrea in February itself: "The cases are probably only the tip of the iceberg. Whether someone returns to the home or not, can not control. "That Eritreans who are allegedly threatened life and limb, traveled to Asmara, lay near it but handle are economic refugees. Aeschi demands that repatriations are now being reviewed in the East African country seriously.

The home Travel not surprise even the Eritrean Honorary Consul Toni Locher. "While traveling, a majority of Eritreans legally because they are in Europe and partly already been introduced a long time." But there was also recognized refugees and a small number of people in the asylum process among travelers.

Often these trips were the redrawing of the friend and the organization of their migration. "Starting a family is in the Eritrean culture at the heart of" The "gender gap" in asylum seekers - the vast majority are young men - is therefore a major Problem. "In Asmara makes the youth party, it is a marriage market," says Punch.

The journey is not very complicated, according to Locher. Suffice it an ID or a passport, also available from the Eritrean Consulate in Geneva - for a fee and the payment of a tax of two percent.According to Locher returnees have to expect no repression.

From a tightening up of laws against home Travel Locher holds nothing: "The control effort is huge - better the Swiss authorities should seek dialogue with the Eritrean government to stop the exodus from the country." At present, while Yemane Gebreab, the number 2 in the East African country, in genf. From Switzerland this but have heard nothing.

Veronica Almedom, Eritrean activist and member of the Federal Migration Commission, contradicts Locher: "It travels more than a small minority in the country. If you know that anyone detained arbitrarily, tortured or even may be killed without seeing a judge, it only returns when good reasons exist. "The crimes against humanity had just confirmed again by the latest UN report been.

According Almedom the Eritrean consulate in Geneva organized the travel, as it ausstelle entry visas. Behind the trips she sees mainly propaganda: "The procedure is in the interest of the totalitarian regime that tried to show with such trips that its nationals have nothing to fear at a return."

Google Translate from German. Original article can be found HERE