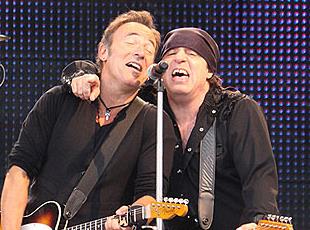 Bruce Springsteen records and tours with the E Street Band. Springsteen is widely known for his brand of heartland rock infused with pop hooks, poetic lyrics, and Americana sentiments centered on his native New Jersey.

In early May 2009 a petition signed by over 200,000 people calling for the release of a jailed Swedish-Eritrean journalist held for almost eight years in Eritrea.

The petition calling for his release was launched March 27, and may be the largest of its kind. It was signed by almost 210,000 people in Sweden, which has a population of around 9 million.

'We were allowed to present our views,' Thomas Mattsson, editor in chief of the Expressen daily, told reporters, adding that they were also 'allowed to ask questions about Dawit Isaak and Eritrea.'

Eritrea's charge d'affaires Yonas Manna Bairu said he would convey the petition to the Eritrean government.

The petition noted that Isaak has been held without charge or sentence.

The editors of the dailies Aftonbladet, Expressen, Dagens Nyheter and Svenska Dagbladet and the online edition of Aftonbladet said they did not get any answers as to why Isaak has been held for almost eight years.

At the launch of the petition, the editors said he was apparently jailed over writing and publishing articles calling for 'democracy and freedom in Eritrea,' they said, noting that Isaak's arrest on September 23, 2001, coincided with the Eritrean government's moves to shut down independent newspapers.

Isaak became a Swedish citizen in 1992 after seeking asylum in 1987. Isaak lived in the west coast city of Gothenburg until 2000 when he returned to Eritrea to work for the independent weekly Setit.

In March 2007, Isaak was awarded a newly created freedom of speech prize by the Swedish Association of Publicists, but was unable to attend the award ceremony in Stockholm.

His wife and three children, who remained in Sweden, accepted it on his behalf.