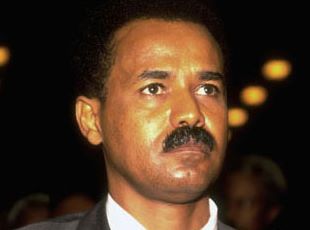 President Sharif Sheikh Ahmed and a former warlord both corroborated growing international accusations that Eritrea has been arming and bankrolling radical Islamist radicals in the long-drawn Somali conflict.

"We know for sure that the majority of the weapons in the hands of the insurgents are coming from Eritrea. Eritrea is very much involved here. We know that Eritrean officers come here and bring money in cash," Sharif told reporters on Wednesday.

His one time arch-rival-turned-ally Sheikh Yusuf Inda'Adde, buttressed the accusations with details of how Eritrea is shoring up the insurgents.

"The guns and weapons were coming from two countries at the time of the Islamic Courts Union (ICU). We bought them from Yemen and Eritrea," said Inda'Adde, who along with his fighters this month joined the government forces.

"Once a whole plane came from Asmara and landed in Mogadishu carrying arms for us during ICU times," said the former defense secretary of the ICU, which battled the former Somali government.

The African Union and the United States have in recent weeks blamed Eritrea for fanning the violence in Somalia, a country that has not known peace for nearly two decades.

{youtube}ObxKysF4Lgs{/youtube}
A United Nations monitoring group on Somalia has long detailed how Eritrea supplies arms and cash to opposition forces in the country.

In its latest report it said the government of Eritrea, two countries it did not name and private donors in the Arab and Islamic world, were among the main sources of arms, in blatant violation of a 16-year-old UN arms embargo.

The latest rebel onslaught is led by the Shebab, an extremist faction accused of links to Al-Qaeda, and Hezb al-Islam, a more political radical group loyal to opposition leader Sheikh Hassan Dahir Aweys.

Before he was ushered into office in January through a UN-sponsored reconciliation deal, Sharif was aligned to Aweys.

They both went into exile in Eritrea when Ethiopian troops rolled into Somalia in late 2006 to buttress an embattled government against an Islamist movement then led by Sharif and Aweys.

Prime Minister Omar Abdirashid Sharmarke describes the onslaught on his government as a "coup attempt" blaming Eritrea of masterminding it.

The hardline Islamists, also believed to be propped up by hundreds of foreign jihadists, want to impose a stricter Sharia law in the lawless country.

Sharmarke said there must be up to 400 foreign fighters, the majority of whom Sharif says are from Pakistan, Afghanistan and Iraq.

"Al Qaeda foreign fighters are also involved and I think it is going to continue. Time is not on our side," warned Sharmake.

Inda'Adde said the Shebab fighters were receiving more funding from Somalis in the diaspora and that the money was being funnelled through neighbouring Kenya.

"Mogadishu can easily receive one million dollars a day from Arab countries," he added.

A country of around 10 million, Somalia has had no effective central authority since former president Mohamed Siad Barre was ousted in 1991, setting off a bloody cycle of clashes.