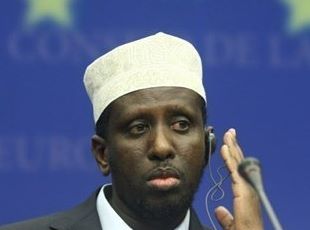 By Emmanuel Goujon – 4 hours ago

MOGADISHU (AFP) — President Sharif Sheikh Ahmed on Wednesday accused Eritrea of arming hardline Islamists fighting to oust his government, a day after his own palace came under a barrage of mortar shells.

It is the first time he directly pointed a finger at the small African nation since the eruption early this month of some of the heaviest onslaughts against his four-months-old government.

"We know for sure that the majority of the weapons in the hands of the insurgents are coming from Eritrea," he told foreign reporters at his Mogadishu Villa Somalia headquarters and targetted residence.

"Eritrea is very much involved here," he said in response to a question adding: "We know that Eritrean officers come here and bring money in cash."

He said Asmara's intention in backing the radical Islamists was to create a base to train units to wage guerrilla war against its arch-foe Ethiopia.

"Since there is a war and tensions between Ethiopia and Eritrea, Eritrea needs a place where Ethiopian opposition groups could be trained," he said. "They want to destabilise Ethiopia from Somalia."

Relations between Ethiopia and Eritrea have been tense ever since a devastating border war in the late 1990s in which some 80,000 people died.

Eritrea was vehemently opposed to the deployment of Ethiopian troops in Somalia in late 2006 and pulled out of a regional bloc in protest.

Asked whether he backed a re-deployment of Ethiopian troops in the face of the renewed attacks, Sharif said "absolutely not".

Residents in a Somalia border town with Ethiopia recently said they saw Ethiopian troops in there, but Sharif said authorities had discussed the matter "and they have agreed that Ethiopian troops will remain inside their border".

The US and African Union have accused Eritrea of fuelling the violence in Somalia, a charge Eritrea denies. African countries have called for the imposition of United Nations sanctions on Asmara.

Islamist fighters opposed to Sharif launched the latest onslaught on May 7, vowing to topple his Western-backed government.

More than 200 people have been killed and some 62,000 Mogadishu residents have fled the clashes in the past 20 days. Sharif has been holed up in his presidential compound under the protection of AU peacekeepers.

His government, which has been confined to parts of the capital, took up power in Mogadishu in January after a UN-sponsored reconciliation process.

But the hardline Islamists, believed to be propped up by hundreds of foreign jihadists, want to impose a stricter Sharia law in the lawless country and are opposed to the presence of the AU peacekeeping mission known as AMISOM.

The Shebab, a homegrown radical group whose leaders are suspected of links to Al-Qaeda, and the Hezb al-Islamiya armed group loyal to hardline opposition leader Sheikh Hassan Dahir Aweys have been battling the government.

Prime Minister Omar Abdirashid Sharmarke said there up to 400 foreign fighters while Sharif said majority of them are from Pakistan, Afghanistan and Iraq.

"We still understand that the influx of Al-Qaeda members continues and you can imagine how the situation will be if they take over," said Sharif.

A country of around 10 million, Somalia has had no effective central authority since former president Mohamed Siad Barre was ousted in 1991, setting off a bloody cycle of clashes between rival factions.