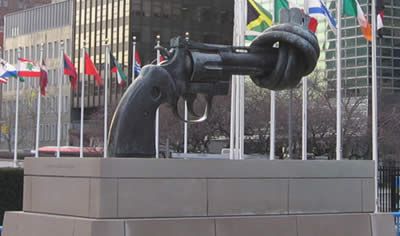 The question is not whether there will be UN sanctions, but how effective they will be to change the Eritrean government’s behavior.

For years, humanitarian and human rights advocates have been calling for punitive measures against the Asmara regime over persistent and widespread abuses affecting all sectors of society using unbridled terror, intimidation, torture and hunger as a means of imposing its will on a silenced population. Thousands of Eritreans have been sent to their torture chambers, many facing death, branded as traitors for standing up for liberty and democracy.

As if this has not been tragic enough deserving immediate action, Eritrea’s attempts to export tyranny and misery to Somalia should be halted swiftly and decisively. The Somalis do not need Islamist dictatorship as fathomed by Al-Qaeda-linked Sheik Hassan Aweys and the Al-Shabab Movement. Nor do they need Isayas Afewerki’s Stalinist type of secular totalitarianism.

There is nothing mysterious about these unholy alliances. More than anything else, the Al-Shababs the Afewerkis and the Aweys are interested in brandishing power and the perceived glory that goes with it. Any ideology that kills, maims and starves the common man and woman in order to achieve a political goal is small thinking and primitive at best and barbaric and anti-human at worst. The preservation of life is the only goal that matters.

Eritrea does not want a democratic Somalia at peace with Ethiopia. Afewerki would go to bed with the devil to achieve that end. There is Afewerki’s political pride and grandeur that was not enhanced by the war Eritrea fought against Ethiopia over a border dispute in 1998-2000.

Catastrophic as it was for both sides, it left a bitter after-taste for Afewerki who wants no talks with Ethiopia’s Premier Meles Zenawi to normalize relations and demarcate the border. Zenawi also has national and personal pride to uphold having sacrificed tens of thousands of his soldiers in the war.

In this equation, the US and the rest of the concerned political world have long withdrawn their sympathy for young Eritrea over the border demarcation issue as the government continues to violate international and regional rules, norms and procedures unprecedented in post independent Africa.

The Obama Administration and the UN may now feel obliged to take stern measures in the wake of reports of repeated transfer of weapons to Al-Shabab and other Islamist forces in violation of UN arms embargo on Somalia.

Sanctions would be the world body’s peaceable way of effecting change in Eritrean government attitude short of military action. Sanctions have in the past helped in taming Libya’s Muammar al-Qaddafi and in removing Apartheid leaders in South Africa. It is too early to speculate what measures the UN Security Council would deem appropriate, but travel restrictions on Eritrean government officials would probably be one measure under consideration.

Sanctions are most effective when coupled with dialogue and diplomacy. It would seem the Eritrean leader, Isayas Afewerki, would welcome any form of engagement in a manner similar to US diplomatic overtures toward nuclear-aspiring Iran.

With an army of 350,000-strong, Afewereki would want to be consulted by the US or the UN over Horn of Africa issues and be regarded as a power broker in the region. Such engagement would also give him the chance to express in person his long-simmering grievances over Ethiopia’s non-compliance with an international demarcation ruling favorable to his side.

All this is very unlikely. Whatever Afewerki’s dreams or frustrations, nothing justifies the steps he has taken to thwart UN and AU efforts to pacify Somalia, and prevent the spread of Al-Qaeda ideology in the Horn of Africa Region.

UN punitive measures with strong backing from the Obama Administration are imminent. In such eventuality, Eritrea’s expected “anti-imperialist and anti-neocolonialist” rhetoric will hardly be credible.