There's an increasing concern that the recent attacks against the Eritrean refugees at the Shagarab camp will get worse. Close observers in the area have indicated that scores of armed Rasheidas intend to take action against the refugees, and are reportedly planning to conduct demonstrations calling for their removal from the camp.

The observers said that a small team of UNHCR team was in the camp, which might have contributed to the minimal decrease in the level of harassment against the Eritreans. Still, the observers warned that they cannot say with certainty the potential for violence in the future.

They also pointed out that an indeterminate number of refugees have been kidnapped while those who attempted to runaway from the camp for safety reasons have fallen prey to the kidnappers. According to the same observers, the refugees would be in grave danger should the Rashaida groups in the area continue to become stronger.

Meanwhile, the international community has paid little attention to the crisis.

Sudanese security forces who came to calm the situation inflicted similar atrocities against the Eritreans. There has been little information on the fate of hundreds of the refugees who were forcibly transported to Girba.

Many Eritreans sustained injuries due to the shooting by the police and were transported to Kassala for treatment. At least one died on December 26 due to injuries. Also of concern at this time is the lack of information on the condition of the injured.

Sources indicated that the refugees were exposed to harm due to the absence of senior UNHCR authorities who had left the camp for Christmas vacation. Although there's relative calm because of the return of some of the officials, there's still increasing hostility by the area Rasheida toward the Eritreans. 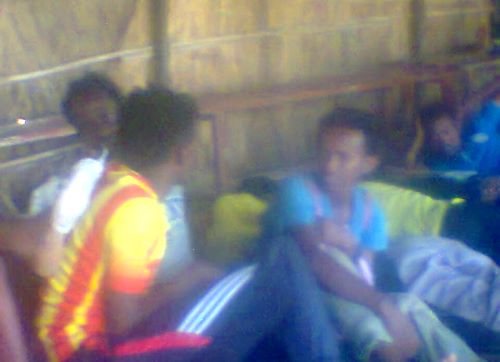