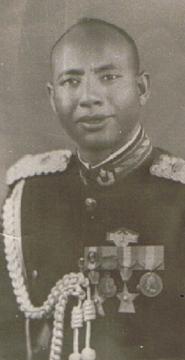 General Goitom Ghebrezghi came to international prominence when he deserted the Derg regime of Ethiopia in 1974 and joined the Eritrean Liberation Front. The event was seen as a big political development in the region at the time and was reported internationally, including by the BBC.

The Ethiopian military commander in Eritrea at the time had planned to mount a military operation against the civilian population for perceived collusion with the liberation struggle. As the police chief, Goitom Ghebrezghi told the commanding general that if army units were deployed against civilians he would order the police commandos to defend the population. The ensuing stand-off averted a massacre, and Goitom Ghebrezghi has since been credited with defending the civilian population of Asmara, the Eritrean capital. Because of this, now known as the Weki-Zaghir incident, the Derg regime saw General Goitom as a serious obstacle to their plans in Eritrea and decided to put him to death. But he fled the country on the eve of the intended execution.

As a young man, Goitom Ghebrezghi joined the Eritrean Police Force in the late 1940s under British administration — from which he learnt a great deal. He was quickly promoted through the ranks and became a training officer at Dekemhare, southeast of Asmara. He was later given the post of district police inspector, and was promoted to the rank of major during the time of the Ethio-Eritrean Federation.

After the Government of Emperor Haile Selassie dissolved the federation, Goitom Ghebrezghi was promoted to the rank of colonel and transferred to Ethiopia, where he worked in the provinces of Gondar, Sidamo and Ilubabor. It was during that time that he was promoted to the rank of general. When the Derg regime came to power in 1974 he was transferred back to Eritrea, which he had to leave within a few months.

After he fled, General Goitom went to Khartoum, the Sudanese capital, where the Eritrean liberation movements had headquarters. Despite the deprivation, Goitom Ghebrezghi decided to stay there to help the Eritrean effort for liberation. He strongly believed that it was only through unity that liberation could be achieved, and he did his utmost to promote this. As an elder, he was an active participant in many of the reconciliation meetings that were held between the various Eritrean liberation movements. He once went to Uganda as a member of a reconciliation delegation. Besides his political contribution to bring about Eritrean unity, he participated in the Eritrean community in Khartoum to provide support and encouragement to individuals, families and groups.

After a number of years of struggle in Sudan, he emigrated to the United States in 1980. He lived first in Boston and later moved to Washington where he started a small business to support himself and his young family.

In the ensuing years many Eritreans had started to emigrate to America as a result of the worsening condition at home including the fighting in western Eritrea. After observing the isolation, mental trauma and deprivation of many Eritrean immigrants in the Washington area, Ghebrezghi took it upon himself to find a solution to the problem, and with two other elders,Solomon Kahsay and Mr Woldesellassie, decided to establish an Eritrean community and later a church for marriages, baptisms and other services. According to witnesses, Goitom Ghebrezghi sometimes went from door to door to help individuals and groups in need. As a result of the tireless effort of the general and his colleagues, a vibrant Eritrean community and a church were established. It became obvious to Goitom Ghebrezghi that such services were needed in other parts of the US as well and he spread his net first to Philadelphia and then throughout the US. General Goitom was the pioneer of Eritrean communities in America.

Goitom Ghebrezghi was born in 1925 in the village of Mefalso, near Mendefera, the provincial capital of Seraye in western Eritrea. He was the fourth child in a family of eight children. He also had roots in Adi Baro, Tsilima, where his father’s line was from.

Also known as Wedi Ma’ke, Goitom Ghebrezghi had a modest upbringing and was self-taught, with no formal education. But he had a sharp mind and was fluent in five languages: Tigrigna, English, Italian, Arabic and Amharic. In his early years he taught English in Asmara part-time. He was also a fine footballer and tennis player in his youth.

He was distinguished by his decency and goodness in bringing people together, even at his own expense. He had love not only for his own family, but for all.

General Goitom is survived by five sons and a daughter.

General Goitom Ghebrezghi, Chief of the Eritrean Police Force and Eritrean expatriate community leader in the US, was born on May 12, 1925. He died on March 3, 2009, aged 83