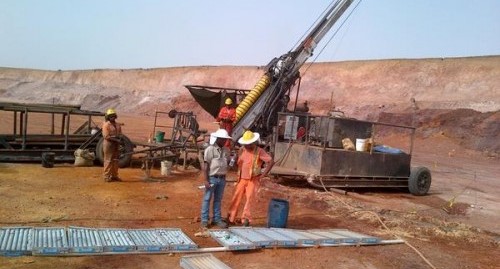 By Lawrence Williams | 24 March 2015 11:33 |
Canadian headquartered, Eritrean base metals and gold miner Nevsun’s shares stuttered briefly yesterday on African media reports that its highly profitable Bisha base metals and gold/silver mine had been bombed by the Ethiopian Air Force – supposedly in retaliation to an Ethiopian helicopter being held by Eritrea. It is so far uncertain as to whether this is a true representation of events with Nevsun only reporting an ‘act of vandalism’ at the mine which caused no significant damage affecting only the base of a tailings thickener during the night shift on Friday which released water into the plant area. This is being repaired and operations have reportedly been little affected. The company says there were no injuries reported.
Nevsun’s 60% owned Bisha mine has been developed on a complex VMS ore deposit carrying high grade elements of gold/silver, copper and zinc. It is configured in three distinct layered zones – a 35m thick surface gold-silver oxide zone (mostly mined out in mid-2013) immediately overlying a copper enriched supergene zone which itself overlies a primary sulphide zone containing both zinc and copper, and which remains open at depth.
The operating plan started off with mining the gold/silver oxide cap and as mining became deeper it has now moved into the supergene enriched copper zone. Nevsun reckons this enriched copper zone makes it currently one of the world’s highest-grade open pit copper mines. But as it mines through this copper zone it will eventually become primarily a high-grade zinc and copper producer. The base metals sections all contain important gold and silver grades which help enhance the mine’s profitability. Nevsun owns 60% of Bisha with the balance owned by the Eritrean state mining company (ENAMCO) which bought 30% from Nevsun and has fully participated financially in the mine’s development programme.  The remaining 10% is a free carried government interest, also held by ENAMCO, in the project.
According to the company, the C$250 million Bisha Mine was constructed on time and under budget between 2008 and 2010. Initially processing the oxide ore cap, the mine produced low-cost gold-silver doré until mid-2013. Through a $110 million copper expansion project, also delivered on time and under budget, throughput was expanded to 2.4 million tonne/year treating the supergene copper-rich ore and the product switched to copper concentrate. The next production phase will see flotation capacity expanded again in 2016 to produce zinc concentrates in addition to the copper concentrates from primary ore. The budget for this project is C$89 million, and will be fully funded from operating cash flow.
Eritrea gained independence from Ethiopia in 1993, but there has ever since been a very tense relationship between the two countries, which at one time spilled over into a border war, and there have been numerous other border incidents. The government is autocratic, even by African standards, but unlike most other African nations corruption is reported to be virtually nonexistent. Talking to other potential mine developers involved in the country, it is looked on favourably by the mining sector as having a very supportive mine development policy and is considered a pretty safe environment in which to operate, as well as having great mineral potential for both precious and base metals.
The Bisha mine is a very significant contributor to the country’s GDP and could thus become a target for Ethiopian military action of the type suggested, although is reasonably distant from the border.  But it does appear that if there was indeed an attack by the Ethiopian Air force it was relatively minor, caused little damage and no casualties.  Further details on the event are awaited from Nevsun which says the mine will be back at full tilt later this week with the damage from the ‘vandalism’ being incorporated into a plant restart later this week. (The plant had been shut down temporarily for ten days in any case for a repair to a ball mill gear box.)
Further details of the incident are awaited as the mine and Eritrean security forces investigate the incident.