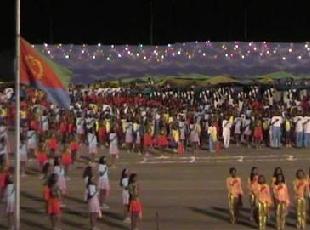 Fellow Eritreans, The third installment on the Ministry of Information’s famous “Mideast Papers” has just arrived. So far, we wouldn’t be surprised if fellow readers have been impatient with the Ministry of Information Serving Truth, and kept asking: “Where is beef?” This time around though we are indeed served the beef – in fact, three kinds of beef! The Ministry of Truth has identified with pinpointed precision the three main reasons as to why the people in Middle East are fed up with their governments that were unable to implement, the way Eritrea has done, three key policies:

The Ministry of Truth’s first insight into the Mideast unrest is that nations like Egypt have failed because they have no “National Harmony” programs similar to PFDJ’s immensely successful and popular “Hade Libi, Hade Hizbii” policy:

If the Egyptian government have had the number and duration of elaborate festivals the Isaias regime conducts – Fenkil Festival, Nadew Festival,  Women’s Day, Martyrs’ Day, Labor Day, The Independence Day, etc – [and in all cases, the term “day” is misnomer, for in some cases the festival lasts weeks], where every ethnic group is allowed to drink, dance and sing to their hearts’ fill, all proudly clad in their ethnic dresses, the nation’s harmony wouldn’t have frayed and, in the end, caused such an upheaval. The Ministry of Truth’s golden advice on how a nation attains “Hade Libi, Hade Hizbi” status: Middle East is burning because, unlike Eritrea, they don’t have cultural troupes – made up of the likes “Gual Ankere”, “Fihira” Faytinga, Kuni, Bekhita Ali, etc – criss-crossing the nation in order to cement the national harmony.

Here is what the Ministry of Truth says regarding “Economic and Social Justice”: “A just political system cannot be instituted short of a developed and just economic order. Political democracy too does not have any foundation without socio-economic.” We get it:  democracy has to wait until the nation develops economically! For the record though, isn’t that what Tunisia and Egypt have been doing? Have Gaddafi, Ben Ali or Mubarak ever got Isaias’ lovely order of “development first, democracy second” wrong? Isaias, Isaias, please be fair when it comes to your former friends! It is true that they failed to implement your impressive Wrasai-Yikealo project, but to blame them for having put democracy first and development second is tantamount to treason in the Book of Authoritarian Leaders.

On the merit of Wefri Warsay-Yikealo, this is what the Ministry of Serving Anything but the Truth says: “In light of this, nation-building and upgrading people’s standard of living is a process that cannot be viewed in isolation. It is obvious that nation-building could not be achieved short of active popular participation which could only be ensured through implementing development programs in the interest of the entire population.”

Of course, the popular participation that the Ministry is alluding to is nothing but the spectacularly successful Warsai-Yikealo project. That is to say, if Egypt had tied all its youth in a slave labor in the Egyptian desert building micro dams (forget the non-selfreliantly built Aswan dam – that is the root of the problem!), it wouldn’t have had to face the uprising from the youth. After all, however perverted it is, the Ministry of Truth seems to have finally blurted out some truth: do not allow the youth to sit idle in the cities!

Now we have come to the icing in the cake: nations like Libya, Tunisia and Egypt are falling like a house of cards because, unlike the glorious Eritrean economy that is the envy not only of our jealous neighbors but also of the entire world, their economies were never self-reliant! There you have it: the truth, nothing but whole the truth! Here is how the notoriously truthful Shabait.com puts it:

“Under this global scenario, it demands the requisite political will and strong courage to pursue political and economic path free from dependency. … In this regard, resorting to the principle of self-reliance is imperative. Viewed within this framework, the nations that resolutely pursued an independent path are the ones that emerged victorious, while those which compromised their independent choice are being exposed to all-round failure.”

Of course, the nation that has been most victorious in this regard is none other than our dear Eritrea – a shining example to the rest of the world! And so what does the Ministry of Truth tells the world as to the secret ingredient to Eritrea’s exemplary success: if the Arab citizens were to be made to queue for “riga bani” in the wee hours of morning under a self-reliant economy like Eritrea’s, and were consistently made to think only of where the next meal would be coming from, they wouldn’t have been rioting in the streets. The advice: keep them half-starved.

Again, the Ministry of Truth seems to have stumbled on some kind of truth – however pervert that truth happens to be.

The Ministry of Information is trying to justify the three main policies of the regime that have been instrumental in controlling the masses: (a) Give the masses one festival after another – “guaila” has been the Eritrean version of the opium of the masses; (b) Kick the youth out of the cities – wherever they may end up. (c) Keep the nation insulated from the rest of the world – hence, the need for self-reliance.

Below is the third installment on the “Mideast Papers” from the Ministry of Information as put in Shabait.com

Popular Unprising: Eve of the End of Era of Domination and transition to New World Order (P.II)
Key factors for national security and stability

As mentioned in the first part of this article, the current stage in world history is characterized with monopoly and marginalization in different parts of the world in conflict with mounting popular resistance. It is a historic junction in which people all over the world are demanding social justice and coexistence in harmony.  Although popular opposition manifested in various corners has distinctive feature of its own in one way or the other, the overall cause, however, is not that different from one another. Hence, in order to have profound understanding of this basic fact, it is imperative to identify the decisive factors that determine the stability of a given nation and society.

What distinguishes humans from other creatures is the fact that they lead a social life. As communal pattern of living gains momentum, the guarantee for having better control over resources and the possibility of leading improved life becomes possible. Thus, the formation of nation states which opened bright prospects for higher lifestyle constitutes the highest form of social organization in the contemporary world.

Peoples and nations everywhere strive for a common goal towards leading improved standard of living under conducive atmosphere.  However, social stability and integrity are decisive factors to achieve this lofty objective, which in turn determine the success of the nation-building process. The main indicators of a stable society could be classified under three categories:

Although national harmony and integrity are the decisive factors for realizing the objectives of peoples and nations, it is an asset that cannot be attained easily, for building a nation involves a long and protracted process.  The majority of states, especially those that were under colonial rule comprise nationals divided along the lines of ethnicity, language, culture and religious groups. Such pattern of nation formation makes nation-building a demanding task. Hence, it is imperative that any government seeking to build a viable nation needs to seriously ponder over the task of governing the people without any discrimination based on ethnicity, language, religion, gender, class and others. In doing so, it could promote social harmony and mutual respect among the people.  Although goodwill and awareness, as well as the formulation of the necessary laws and policies make due contribution to this end, the mere incorporation of these factors in the national charter could not at all ensure national harmony. Its actual implementation calls for firm conviction and commitment on the part of the government.  The realization of such a major national objective requires continuous campaign, cultural programs and follow ups. The main failure of governments in this regard lies not in the theoretical concepts but rather the scope of commitment for its actual implementation.

A just political system cannot be instituted short of a developed and just economic order. Political democracy too does not have any foundation without socio-economic democracy. Hence, the nature of the economic order is the one that determines the type of a political system. Regardless of political will and pledges, such goals cannot be attained without building a strong national economy that ensures the participation and benefit of all,  equitable allocation of natural resources, and above all equitable opportunities. In light of this, nation-building and upgrading people’s standard of living is a process that cannot be viewed in isolation. It is obvious that nation-building could not be achieved short of active popular participation which could only be ensured through implementing development programs in the interest of the entire population.

It is imperative for any government keen to build a viable nation to clearly spell out objectives and principles aimed at ensuring equal participation of all citizens in national issues and equitable allocation of resources. To this end, it should formulate the necessary policies and regulations, as well as strong commitment for attaining the set goal.  Special attention should also be given to improve the lifestyle of marginalized sections of the society. In other words, a just economic growth must be instituted, as equitable development of all sections of the population constitutes the yardstick of justice.

In the contemporary epoch, the progress that any people or nation could achieve is limited in isolation from its surroundings and the world at large. For this very reason, fostering foreign relations is significant so as to register economic, trade, cultural and technological development. However, such relations should be cautiously handled. It is indisputable that the prevailing relations between the developed and developing countries is essentially unbalanced and based on exploitation. Besides, such pattern of relations strives to nurture political and economic dependency, and thereby ultimately ensure all-round monopoly. This unjust ties not only paralyzed a number of nations but also exposed them to the brink of total demise.

Under this global scenario, it demands the requisite political will and strong courage to pursue political and economic path free from dependency.  In the final analysis, becoming master of your own programs and decisions is the sole path for the effective realization of national objectives. Any government committed to develop the people and the nation should, therefore, keep intact its independent political and economic path through coping with possible hostilities. In this regard, resorting to the principle of self-reliance is imperative. Viewed within this framework, the nations that resolutely pursued an independent path are the ones that emerged victorious, while those which compromised their independent choice are being exposed to all-round failure.

It should be emphasized that the stability of societies rests on national harmony, socio-economic justice and independent path. Looking from the standpoint of the aforementioned three fundamental factors, it is not that difficult to comprehend the domestic and external causes for the current popular uprising and turmoil in different parts of the world.

The next article would deal with the causes for popular uprising in general, and that of the ongoing protests in North Africa and the Middle East in particular.