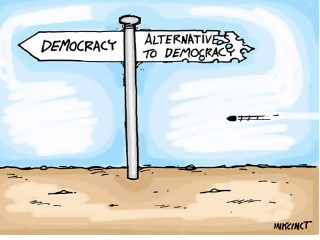 The more you live the more you learn inexplicably shocking things specially from individuals one never expected to be serving a perilous project for the health of our politics and the common destiny of our people. On May 16, 2010 I wrote a piece on harnnet.org in response to Ibrahim Tada’s article on which he accused the EPDP party with conspiracy and treason. Despite Fessaha Nair’s celebratory statement in his previous piece on our withdrawal from the conference, I mentioned his name about his call (in his second piece) on EPDP to reconsider its decision to stay out of the conference. I guess mentioning his name alone was enough to get him vexed and respond on behalf of the Tadas and Ali Salims, not known for their innocence, with impunity. In his piece of May 17, 2010 on togoruba website, he touched on a number of disconnected issues about EPDP leadership, EDA and myself. Yet, all of this would not bother me one bit. However, one thing he said in his article is worth making a note of. He wrote: decision - making process of the EDA is by consensus; when one party disagrees with the majority decision, then the leadership decides with sufficient consensus.

1. In my view, if the opposing voice is disregarded and decision is taken by the majority nevertheless, this is not consensus or sufficient consensus for that matter. It is a vote by the majority. Therefore, the previous agreement of making decisions by consensus is abrogated. Hence, the argument on sufficient consensus falls on its face because in this instance, you either agree or you don’t; there is no escape route you can create. You try different avenues until consensus is reached. Other than that, the claim that the preparatory committee was selected in the presence of EPDP representative is an intentional four - legged fabrication to saw seeds of suspicion in the rank and file of our party against the decision of its leadership. Read the unambiguous report on harnnet.org by the party’s rep., Mohamed Ali Ibrahim in Addis Ababa who lived the tricks and twists of the EDA leaders. Instead of discussing conference matters within the executive committee meetings, these few individuals are aggressively engaged in a malicious campaign through their devotees by infiltrating parties/groups and individuals to create division that is by the way their hallmark. Decision - making is very easy; all it takes for the Kidan bosses to recruit operatives is just a phone call away. If one of them gives you a buzz, you are either a member of the preparatory committee or a member of the conference, the hell with the central committee’s recommendations or the executive committee collectively mandated to do the job of selecting. By the way F. Nair can believe what he wants to believe; nobody has the facts better than the EPDP rep. who went through thin and thick with the tribal chiefs of the EDA.

In his effort to frustrate some individual leaders, this person attacked the party in so many ways. However he tried hard though, I chose not to respond to his unwarranted insults because it is clear that it would take me nowhere with his attitude. He also asked me for a proof that the EDA leadership disrespects the EPDP. What bothers concerned citizens is not so much how these practicing little dictators treated the former ELF-RC and today’s EPDP; it is their absolute disdain for the mutually agreed rules of the umbrella organization.

2. For instance, in the February 2007 congress, the sitting chairman of the EDA openly refused to step down from his position in order to prevent the election of a new chairman. This may not sound real but it actually happened.

3. In 2008 when the congress smoothly finished its agenda items and moved on to selecting new leadership, the EPP (former ELF-RC ) candidate who was expected to clinch the chairmanship faced unexpected resistance. One of the chiefs from the opposite isle stood up and fought fiercely to stop the candidate and he did. For the sake of orderly congress, the delegation had to swallow the bizarre behavior and continued the usual business. Imagine, ELF-RC was the one that played a major role in forming the Alliance itself but only led it for one year in 2001. Since then, the Alliance became the play ground for the greedy whose sole aim is using religion and ethnicity as an access to power. It is worthwhile mentioning that a few months before the said congress, Fessaha wrote a piece in which he petitioned his bosses to block our organization from being elected to chair the EDA. To him, this is not disrespecting a partner in the Alliance.

4. From there on down to the formation of EPDP, spearheaded by their ideologues in a certain website, they fought this party tooth and nail, particularly someone dear and near to Fessaha Nair who is well known for his adventurous conduct. I am saying this not simply because of my aversion to him or anything but there is irrefutable evidence for which he should be accountable.

5. What he did last year in Australia when he traveled on EDA official trip is another example I can cite.

6. The EDA leadership was officially notified of his misdeeds but to no avail because accountability is a foreign element to it. After all they are all of the same flock. You cannot expect much from a leadership that is antithetic to a democratic process. Not only some defend these actions, they campaign against those who constantly point out the wrong doings of the Addis Ababa based chieftains of the EDA.

7. I hope Fessaha Nair has not forgotten the outburst of the bosses in the aftermath of the Brussels conference that he himself participated by echoing the wild accusations against CDRiE and EPDP and later against the London Peace Conference and other groups. As a party, we are used to being at the receiving end of such insanity; so is the Brussels host group. The shame is wittingly attacking the EU and the US side without a scintilla of evidence.

8. What about the delaying tactics played by the bosses until such time that the Frankfurt unity date approaches and our rep. gives up and leaves to attend the unity conference. It was in his absence that they selected the preparatory committee for the waela.

9. The same F. Nair has the habit of asking demeaning questions. This time he wanted to know who I am and on whose behalf do I speak, politically that is. The latter question was the same one I asked him few years ago that he never answered. To answer his questions: I am some one who believes that the unity, survival and success of our country can only be assured through a national democratic secular movement. There may also be other reconcilable similar programs. Anything less is settling for religious and ethnic politics a guarantee for the free fall of our nation. Now, I know the merchants of division will jump to conclusion by labeling EPDP as an anti religion. No one is advocating for communism; please do not be bamboozled by those who wish to see us divided. There is no reason why the two cannot live side by side peacefully. The talking heads in the websites and the EDA zealots flooded the broadcast and cyber media with the notion that historically, Muslims have been oppressed and excluded from the govt. employment. That is true to some degree. But there is one fact these guys don’t want to reveal. Generally, Muslims in Eritrea were by trade business owners and would not go for a meager government salary. That is to say, they were better off than many so-called employed Christians. Again I am not saying there were no Muslims who needed employment by the State. The sure way to secure justice and equality for our people is to be united and work towards creating a democratic system. Bottom line: that government must be one that respects the collective will of the governed. The second question was on whose behalf do I speak. To be brief, I do not speak on behalf of any particular group, ethnic or religion. I speak and do along with those who strive to realize the points espoused above. Mr. F. Nair also assumed I am afraid of Ali Salim and awate. As ridiculous his notion is, I must remind him that they should be afraid of themselves for the monster they created in the body politic of the Eritrean resistance. Rest assured I have nothing to hide and nothing to be afraid of. History will judge us who was right and who was wrong. Polorizers can never be proven right anyway.

I am told the goal of the conference is peace and democracy. Nonetheless, the main actors in this endeavor are diametrically opposed to the culture of peace and democracy. Are you telling us that this same people will shed their skins in the conference hall and suddenly become democrats or, am I missing something? This Waela was supposed to be run by Eritreans with integrity and credibility. It is clear that their calculation from the outset was to exclude such personalities so that the outcome of the conference may serve their narrow ends. And so, by all measures the conference is not and cannot be participatory. As some one I respect suggested, this conference should have been called by the civic societies to help heal the differences among the opposition groups. In any event, what is up is down and what is down is up in the logic of those who are racing with time to own the conference not to bring democratic change of course. Hell no, that is not in their nature.

Finally, I call upon all Eritreans organized or otherwise who care about the dignity and pride of our struggle for our country to be vigilant of what is brewing in the name of the so - called exclusionary hagerawi waela. Those who chose to stay out of the theater, worry not. When all the hallo baloo (fanfare) settles down, they will wake up to their old self. Nothing will change unless the EDA withers away.