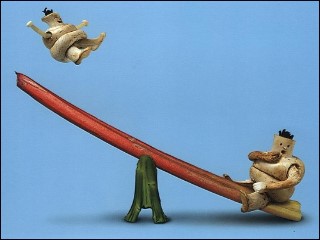 … many, many moons ago when I was the exact age that my twins are now, I got into a fight (and a physical scuffle at that) in our neighbourhood, that was unrepresentative of me as I have always avoided such scuffles as a matter of course. Not because I was a pacifist or anything, in fact many of the fights that our little gang of kids got involved in was probably caused by my argumentative stance often as stickler for many undeclared principles tethering on some sense of fairness (or at least an expectation of a certain standard, often unrealistic, of fairness). But my involvement in the physical side of the fights was limited to the running and alerting the ‘responsible adults’ who often left us to our devices for hours on end…I had a pragmatic approach to these things… mainly because I was one of the tiniest of all of us … but on this particular afternoon I somehow got into scuffle and I was getting pelted, until a passerby (the maid in one of the houses) saw what was going on and in an effort to stop the fight she grab hold of two skinny arms… she thought, and I knew it even at the confusing crazy moment, she had one each of our scrawny arms for she was muttering her intentions as she was untangling us)… but what she actually had was the two arms of the girl who was fighting with me leaving her unable to fight back or defend herself… taking advantage of the situation I did what every girl does in such situation… and made poor Selam (yes we had the same name and were mostly inseparable under normal circumstances!) cry her eyes out… I capitalised on the confusion of the moment and the intervention that went a bit awry… the other Selam must have been so frustrated by the whole thing and I am pretty sure that her sobbing was in reaction to the unfairness of the situation more than the physical pain that I was causing her with my feeble blows… throughout our childhood I would make references to the time I made her cry and she would protest vehemently stating the unfairness of the situation… and every time we got into a fight (verbal and never ever fist fights since that day!) the first thing that comes out would be; ‘you are a cry baby!’ from me or ‘how comes you never ever agreed to a rematch under fair circumstances!?’ from her…

And that is how I feel about the whole national Conference talk these days…. People who have gone in to make matters better are making things worse by creating an imbalance in the whole situation and countering the opportunities for the divergent views from coming to any form of plausible solution befitting the issues raised. And of course the side that is given the advantage will capitalise on it… there will be a winner soon… but the winner will not be the Eritrean public who should benefit from a genuine exploration of issues and concerns from all angles to arrive at a coherent strategy that would guide the remainder of our struggle.

The success of the Conference shouldn’t be measured by how many people descend on Addis on D day. But how many people return from Addis with a clear strategy on the elements and strands that will jointly effect the change that we seek in Eritrea. And how many fresh alliances and joint strategies are brokered as a result of fresh understanding arrived at out of this process, and to do this (i.e. to ensure the generation of new alliances etc.) new partners should be represented at the conference and new partners can only follow where a lot of footwork has taken place in confidence building allowing people to take the first tentative steps towards cooperation… this doesn’t happen at conferences; this happens in the months and years leading up to conferences, for me nothing that EDA and latterly the organising group that had taken the ropes from EDA, have done has bolstered my confidence in that process, after it was dashed last December during the hastily convened conference, that contrary to the agreements reached last July reconvened the usual suspects to do the usual stuff.

A classic example of the bridge burning that is happening currently is a meeting that took place in London recently; over a weekend where there was another meeting that involved at least 30 activists living and working in and around London, the EDA conference organising group hastily organised (at a week’s notice) their information giving session and elected a group to facilitate the garnering of support for the upcoming national Conference. Someone later told me that this was because it was felt that the people who were involved at the other conference (namely: the Brighton Peace Conference) had stated that they were not interested in the national conference at all (I asked for evidence of this… none was forthcoming).

I beg to disagree, I have yet to hear of anyone who objects to a conference that brings Eritreans together to plan the course of our struggle together and arrive at a workable strategy… Some (myself included) have outlined our concerns and these concerns are being misconstrued (mostly by people who think they are facilitating the conference taking place) as objecting to the conference. What these people don’t seem to appreciate is that Eritrea as a nation should be indivisible and a national conference as such will never amount to that if it doesn’t effect the coming together of nationals, including those (in fact especially those) who do not see eye to eye on matters. By siding with one side of the question the oganising group and the satellite groups they are forming across the globe are in fact preventing a fair analysis of the issues being raised by those with genuine concerns. By diluting the issue to: for or against the conference… or with or against EDA they are further fragmenting the intricately arranged formation. Some of the shouting matches and name callings that go on in paltalk sessions make me wonder if people really understand that it is the fate of a nation that we are trying to address here. It also makes me wonder where all the sober, deep thinking Eritreans have gone… where the voice that says ‘let us hear both sides’? Are we really only ever destined to only ever live and operate from polarised ends of every hurdle that we come across?

… In conclusion and one last time (a last ditch attempt) let me state what my concerns are and offer my unassuming suggestions (extremely tentatively if I may add) from my limited understanding of Eritrean politics:

Last July the Eritrean Democratic Alliance had a workshop and there was a 100% consensus on the need of such a conference and on the mechanism for setting it in motion:

Latterly there have been a flurry of regional meetings, these are positive in allowing local participation, however these shouldn’t just focus on conference organising but should effectively be used in allowing people to set the agenda by giving them opportunities to contribute by putting forward their recommendations and contributions to the emerging joint strategy for democratic change in Eritrea.

In the months leading up to the meeting that elected the coordinating group (to my knowledge as an avid follower of Eritrean media) there was no mention of the upcoming conference and I am afraid what has emerged since is not a substantive discussion of the real issues and concerns but drumming of support for an event… the Eritrean public deserves better, a sober discussion of the opportunities of such a conference and the issues/concerns raised, is what we need and not a propaganda war for or against an event. Again an extremely generous assessment of achievements with this respect would be much less than the satisfactory level required for such an important event