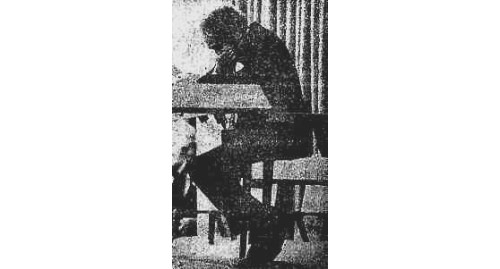 Emperor Haile Selassie ruled Ethiopia for almost 44 years; after having been in the throne in 1930; an event which was widely attended by foreign visitors and reporters. The emperor was considered by both Ethiopians and people abroad as a visionary, a progressive and a modernizer. Some in the African diaspora even worshipped him as a prophet. However, all his fame and progressive credentials didn’t save him from a sudden and humiliating end of his reign, which was not only long, but remained absolutist in the end.

The picture above is rare and unique. After being hastily whisked in a Volkswagen, Haile Selassie spent his brief life isolated from his family, his royal courtiers, and all the trappings of power in 1974. This picture made by an anonymous photographer is very powerful in depicting the end of absolute rulers and the final fate of man.

As elementary students in the post-World War II, we gazed at another of his photograph, his wife and two of the princes in fascination and awe. It was displayed on the cover of our exercise books, which we habitually bought the then ubiquitous Yemeni-owned shops. The emperor and the rest of the royal family looked proud and distant. It didn’t prevent nonetheless from always anticipating his occasional visit in the town we lived. His big and fierce looking Imperial bodyguards did not stop the few dare-devils among us from approaching his fleet of cars. 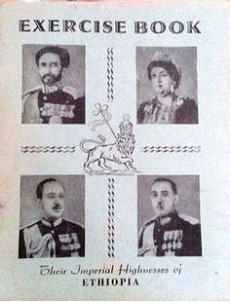 However, we were soon disillusioned. We who loved and adored books published in Amharic with the character “Lemma” as a model to follow. Lemma and his adventures at school, at his village and its market. What happened? The free education policy of his regime, which increased the student population attending modern schools increased by a huge percentage. Jobs started getting scarce; dampening the expectations of the elite in a dangerous way. This impatience was shrewdly exploited by radical students in the university in Addis Ababa, and high school students in the rest of the empire. This impatience made the student population and some civil servants easily fall for the growing communist influence, which was secretly led by a small group of student revolutionaries.

The radicalized students, who caricatured the members of the Ethiopian parliament as “donkeys” and stupid were also intolerant and uncivil among themselves. They had little political space to vent off in absolutist Ethiopia and were prone to look for radical and quick solutions. When the military officers took power, many of the educated elite felt betrayed, bitter and angry.

Separately they fled to northern Ethiopia and abroad to launch armed rebellions, where the Eritrean “liberation” fronts had a head-start. After 17 years of armed warfare, those who built intolerant and formidable military machines descended from the north and took Addis Ababa. Other rival organizations were either decimated, weakened, or left as refugees and bided their time. It didn’t bode well for the nation.

The ethnic based federation which was established following the defeat of the Derg, lasted 27 years. Like the emperor, the former rebels in power emphasized the need for infrastructure such as roads, dams, factories and schools and built them to the acclaim of the international community. Like the emperor, they weren’t able to dampen down the rising expectation of the Ethiopian youth bulge. Ethnic- based politics didn’t help.

44 years after the downfall of the former king, Ethiopia is now in a turmoil. The monopoly of violence that belonged to Ethiopian state and subsequently by the various fronts is now in the hands of youth groups, under various names such as, Qerro and Fano. Now, the violence of these mobs has resulted in the internal displacement of almost 2 million people, the death of hundreds in remote regions, and the massacre of scores of people in the suburbs of Addis Ababa. Whereas in the past this metropolitan city was besieged from the north, this time it is from the south. Like its sister city Asmara, Addis Ababa has now new claimants, who treat other citizens as outsiders. By any standard, this is a frightening scenario.

However, many of the Ethiopian elite in the city and abroad are in what is described as “Abiy-mania.” While in the region, a rag-tag army of the old revolutionaries has “put down” their arms and made their way back to the country. These revolutionaries, who immersed the nation in wars for decades now look old, greying and incoherent not different from the King Haile Selassie’s last brief days. While, some of their conservative counterparts believe (with little shame) that the current prime minister is a God-sent, or a Moses.

They seem to be blind to the big farce. What they need is to use their own words: a deep gemgama, or a criticism and a self-criticism, and a deep remorse for their past acts. They should look at the picture of the emperor and discover themselves, for the image is their double.