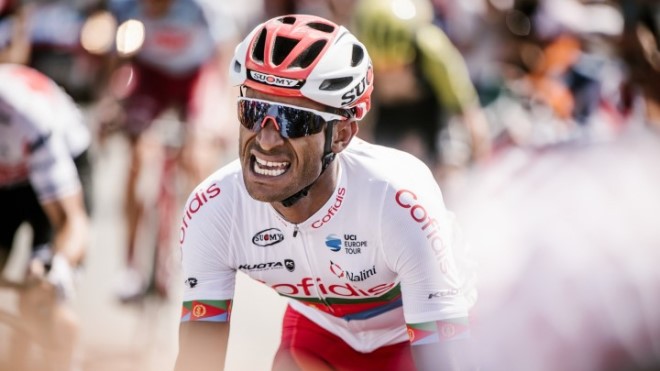 Natnael Berhane, 28, is an Eritrean professional cyclist who is competing in this year's Tour de France for the French team Cofidis.  If you visit the official Tour de France Website today, you would see Natnael on the front page alongside Julian Alaphilippe, the tour leader, Peter Sagan, the Green Jersey holder (sprinters jersey), Tim Wellens (best climber), Egan Bernal (best youngest rider) and then ... long drumroll for No 152 … Natnael Berhane, the winner of the Combativity Prize.

The Combativity Award is a prize given in the Tour de France for the most combative rider overall during the race. The race is not over yet – it has another 10 stages to go.  However, Natnael Berhane has managed to capture the imagination of many cycling-fans.  We hope he will retain the prize until the end of the 21-stage race.

Natnael’s stage-6 ride was most impressive where he broke away with a group of four to lead for 150 km (out of 160 km).  Many thought he would win the stage.  But it was not meant to be – the Peloton, the main group of riders, caught up with him shortly before the finish line.

Natnael is making a name for himself, his team (Cofidis) and Eritrea.  Eritrea is a cycling-mad country that has a long history in road-racing.  It is to be remembered that many Eritrean cyclists had taken part in the Olympic road races, representing Ethiopia, since 1956. Many remember closures of major roads in Asmara on Sundays during race times – best recreation in town and worst nightmares for motorists.

Natnael is more than that to us Eritreans. This Asmarino rider is a joy to watch riding among big names such as Geraint Thomas, the defending world champion from UK;  Nairo Quintana, the top-notch climber from Colombia; the Frenchman Thibaut Pinot; Peter Sagan, the Slovak man-machine (best sprinter); Vincenzo Nibali, the indomitable Italian known as the "Shark of the Strait" and more.

Not only did Natnael take part in the major world stages - Giro d'Italia, Tour de France and Vuelta a Espana – but he also took part in many races in Africa and Asia. It is to be remembered that Natnael had received the African Cyclist of the year 2012 trophy from Bernard Hinault, five-time Tour de France champion in Libreville, on January 20, 2013.

Tour de France, the 21 stage race is gruelling. Out of the 176 international riders who are taking place in this year’s race,  Natnael is the only black rider amongst them. He has finished 10 stages and he has ten more to go.  His general classification at the moment is 89th and he is determined to have at least one stage win under his belt.

Natnael said, “this is my second Tour de France, and I want to come back for more in the next few years. But most of all I want to produce good results in this year's tour. My dream is to get a stage win.”

Sponsorship and obtaining travel visas to compete abroad are the main challenges Eritrean cyclists face today due to restrictions imposed by the government.