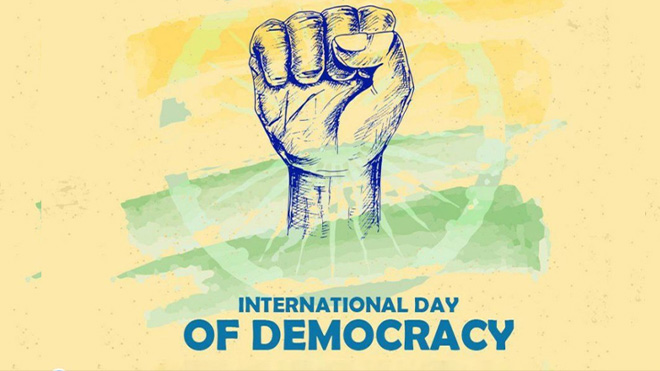 Eritrea, more often than not, tends to celebrate UN International Days rather selectively in order to fake its partaking in annual events and commemorations  - to show it cares to be part of the International Community while the fact on the ground proves otherwise.

We can imagine Mrs Sophia Tesfamariam, the Eritrean UN representative, sitting among world diplomats as Mr António Guterres, Secretary-General of the United Nations, delivered his speech – perhaps she clapped her hands enthusiastically to fake that Eritrean way of life is based on the principles of democracy.

International Day of Democracy does not concern Eritrea. But it does concern hired propagandists like Dr Fikrejesus Amhazion, who choose to suppress the tenets of democracy as much as possible; as if democracy does not exist in our thoughts and dictionary.

The aim of government pranksters is to have democracy portrayed as a fake concept which does not apply to our existence.  This misconception is a case in point for self-serving and intellectually bankrupt individuals like Dr Fikrejesus Amhazion.

The United Nations’ (UN) International Day of Democracy is annually held on September 15 to raise public awareness about democracy. Various activities and events are held around the world to promote democracy on this day.

What is the theme of this year?  This year’s theme revolves around the opportunity to recall that democracy is about people.  To bring it home, democracy means for Eritreans, by Eritreans, and of the people of Eritrea.  PFDJ, the government party, ignores how democracy gives us human rights and key protections.  When will the PFDJ band ever understand that democracy is the bridge between the rulers and the ruled?

Democracy is a universally accepted wonder that no one, especially those who experienced it, should deny.  Hundreds of thousands of Eritreans have enjoyed the benefits of democracy in their host countries.  However, it is unfortunate that Eritreans in Eritrea have never experienced the joy of democracy.

The regime in Eritrea has not only neglected that democracy is built on inclusion, equal treatment and participation, but it continues to suppress the notion that it is a fundamental building block for peace, sustainable development, and human rights.

Once a certain Richelle E. Goodrich challenged our being by saying if “we have ever stopped to ponder the amount of blood spilled, the volume of tears shed, the degree of pain and anguish endured, the number of noble men and women lost in battle so that we as individuals might have a say in governing our country.”   In other words she reminded us of the values of having a say in the affairs that govern our lives through honouring the lives sacrificed for our freedoms.

Eritreans are in a tight place; everything seems to go against what its people had fought for.  On the other hand, Eritreans have learned never to give up.  They know the tide will turn sooner or later.  As Nelson Mandela, an authority on democracy, said it: “It always seems impossible until it’s done.”

So on this day, Asmarino.com wishes to share its goodwill and its camaraderie with fellow Eritreans who are ceaselessly campaigning for democracy.   As some wise people would say, the nearer the dawn the darker the night.  We are nearly there!