"Our Greatest Resource and Most Precious Asset?" Source Shabait 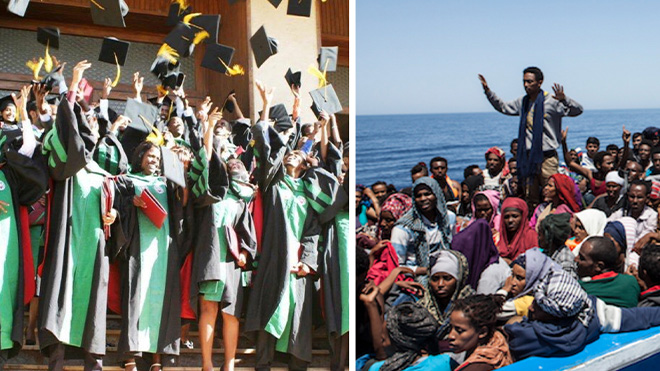 A certain Dr. Fikrejesus Amahazion wrote an intriguing article for Shabait.com yesterday.  He argued that Eritreans, referring mostly to the new graduates, are the country’s major assets.

Really? The good doctor must have overlooked, perhaps deliberately, certain facts on the ground for him to write in such an audacious manner. Could he be following the PFDJ dictum here?

Dr. Fikrejesus may be of the opinion that the most effective way to muzzle no-nonsense Eritreans or make them toe the line is by altering the reality on the ground - to deny and annihilate their own understanding of their own existence.

It is beguiling to observe how every graduation ceremony is shrouded in sheer government P.R. year in and year out. Irrespective of the bustling commotion, the condition of the new graduates and the facts on the ground is quite different.  Actually, the situation for the graduates has remained tragically static for decades, with no end to years of servitude.

The system around them, one that depletes them of their energy, enthusiasm and goodwill, continues to churn out ‘graduates’ by the thousands every year.  What happens to them after graduation is indeed the real story.

The new graduates were probably born during the Badme war.  They were certainly toddlers when Eritrea plunged into a slippery slope from which it failed to recover.  They can be referred to as the “September 2001” generation.

September 2001 has a major significance to Eritreans throughout the world.  It is the month when reformers from within the government were silenced and made to disappear unlawfully.  September is the month our journalists were incarcerated and the fledgling newspapers were closed for good. Before that so many Muslims and Christians were hunted and detained for practising their faiths.

If the new graduates were asked who Saleh Kekia or Germano Nati is – former government officials who advocated for reforms – the new graduates will simply shrug off the question. But now they can read and rationalise, can’t they?

The new graduates apparently know the stories of the previous generation and the realities in today’s Eritrea.  Now those who were toddlers then are graduating only to flee the country.  That has been the Eritrean reality all along.  !

He stated: “Eritrea’s greatest resource and most precious asset, by far, is its people.” That is a true statement. There are additional true statements that go alongside his assertion which he has neglected to include in his article – assertions that are more critical in defining the human nature. They are needs, aspirations and free will. He knows very well that the “human capital” he talked about very much depends on human rights.

Dr. Fikrejesus Amahazion’s article is simply one that services propaganda.