The Story of Fessehatsion Beyn (Beyene), the first Eritrean Pilot,
His Italian friend Girolama Ricucci and their son Claudio 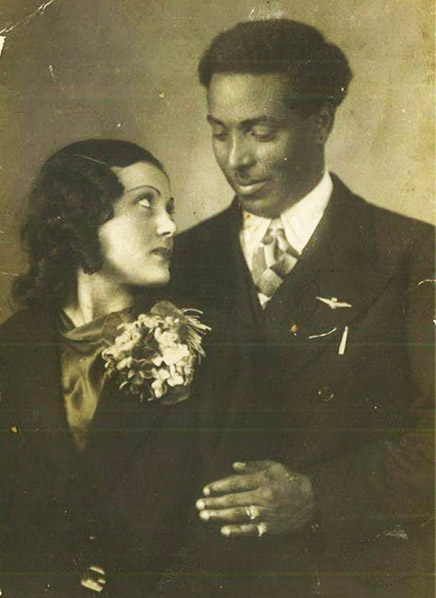 Documents of the colonial era are sparse and incomplete, but they are also one of the written sources preserved in the post-fascist period.  By going over the documents available at the Archive of the Historical Office of the SME, Professor Alessandro Volterra, expert in History of Africa, reconstructed the story of Fessehatsion Beyn (Fessahazien Beienè), who had a very special life for a colonial subject of the fascist era.

Fessehatsion was born in Keren in 1890 and educated by the Catholic Mission.  He went to school with the likes of Lorenzo Tazaz and Dr Embaie Woldemariam, both important politicians under Emperor Haile Selassie.

Fessehatsion could speak several languages - Tigre, Tigrigna, Arabic, Italian and Amharic - and he put his language skills to use by working as an interpreter for the Italians.

After he moved to Asmara he worked as a driver for an Italian officer’s family; he then moved to Italy in 1921 with his employer. The mere fact that he had a driving license, which was rare in those days, not only for Eritreans but also Italians, speaks for itself; he lived a life out of the ordinary.

Fessehatsion settled in Rome and worked for the Montenero family as a driver.  According to his nephew, his great-uncle was a modern, elegant, intelligent and a very complex man.

While working for the Montenero family, he met a certain Girolama Ricucci, who was also, probably, working in the same household. The two began a relationship that ended drastically when she became pregnant in the summer of 1923.  Fessehatsion had to return to Eritrea in December of the same year.

It is not known whether the repatriation was forced or voluntary, although the circumstances lead us to believe that he was pressured to leave the country.  Most probably, people of colour, were not tolerated in Benito Mussolini’s Italy.

At the birth of the child, Girolama gave her son her surname and then left him in an orphanage. Claudio Ricucci, son of an Italian girl and an Eritrean subject, spent the first twelve years of his life being moved from one orphanage to another.

Meanwhile, Fessehatsion returned to Eritrea and joined the Italian army as an Askari.  In 1927 he returned to Rome once again with a group of Yemeni trainee pilots.  He was designated as interpreter (Italian/Arabic) and overseer of the group’s needs. He took advantage of the opportunity and ended up securing a place for him self among the trainees, obtaining a civilian license and a second military pilot's license within two years. There is no information, however, why he did not look either for Girolama or Claudio, his son, during those two years of training.

In April 1929 he was transferred to Somalia, assigned to the Command of the Regio Corpo, where he remained in service until 1936. Presumably he did not use his aviation skills in Somalia. However, Prof Volterra extracted this piece of information from a file that General Luigi Frusci, the last Italian Governor of Eritrea and Ethiopia, compiled.

The report stated that Fessehatsion, during the period of the war against the Ethiopian Empire, "conducted himself with admirable tact and intelligence – he was able to provide remarkable and precise information, news that was highly appreciated and very useful to our military commanders." He continued praising the soldier's personal abilities as follows: "he inspires great confidence [in others] and appends intelligence, zeal and accuracy to all the cases that are entrusted to him". However, these qualities, which allowed him to have a brilliant career, did not save him from the absurdities of the fascist bureaucracy.

In 1936 Fessehatsion returned to Rome once again; this time to look for his son. He found him at the Colonie Giovani Lavoratori  in Rome; the mother had remarried and given her consent to Fessehatsion’s request to take the child with him.  But there arose more bureaucratic complications: Claudio, recognised by his mother, had obtained Italian citizenship; and it was not permissible for him to live with his father who happened to be non-Italian.  Basically, the child/parent relationship was not ‘compatible’.   Fessehatsion’s rights were transgressed – he could not, therefore, raise his own son.  He could only name him as his heir, and he could provide for his needs.

However, this was not enough as far as the fascist bureaucrats were concerned; a memo in his file informs us that “it was best for him to return to Somalia, and so the ban on returning to Italy was affixed on Fessehatsion’s passport.”

The rest of story is confusing.  What happened to Claudio in the end? What about Fessehatsion himself?  Did they ever get together with Girolama? Let’s try to reconstruct it from bits and pieces that were presented by various sources. It suffices to mention though that the bureaucracy around rights, colour, identities was a big ball of confusion.

Fessehatsion went back to Mogadishu; presumably, with Claudio.  There he married a woman from Keren.  Claudio’s conditions are not clear after Fessehatsion got married. The last document in Fessehatsion’s file is from 1940: Caroselli, governor of Somalia, wrote to the Italian Africa Ministry asking for an explanation on the ban on returning to Italy, admitting that Claudio’s conduct "leaves much to be desired."  The wording (of the Italian text) is a bit confusing.  However, it indicates that Claudio was in trouble in Mogadishu.

On the other hand the article stated that this was not a consideration on the character of Claudio or on his behaviour:  the problem was always the same, the scandal regarding African families of ‘incompatible races’ – African and Italian.  Therefore, Teruzzi, Undersecretary of State for Italian Africa, replied to the governor citing the problematic nature of the case - for it was inadmissible for Claudio to live with his father, and not being able to entrust him to his mother. The undersecretary states the boy should have been entrusted to a third party (an institution).   His reply is dated May 12, 1940.

Subsequently, proclamation 882 was promulgated - "laws concerning mixed children". Article 11 established that "citizens of mixed heritage are considered Aryan” – basically, white.  This was the legal basis that denied Fessehatsion guardianship of his son.

After this episode the only sources to reconstruct the story of Claudio and his father are oral testimonies. A friend of the boy, Vittorio, says that they studied together in the boarding school in Mogadishu.

Things changed when the British arrived in Somalia in 1941; Fessehatsion decided that Claudio should leave the country for his own safety.   It is believed that Claudio eventually went back to Italy. The exact date of his return is not known. The last news we have of Claudio is of 1953, when he enlisted as a soldier in Albenga (Italy).

This story raises many questions. What was Claudio's life like once back in Italy? When the war ended, the fascist regime was overthrown, the colonies lost, what would have become of boys like Claudio? In a country that wanted to forget its colonial past by dismissing it as an historical error, life would not have been easy for Claudio, son of an Eritrean soldier, would it?

Fessehatsion was a man who served fascist Italy with his multiple skills, he ended up discriminated against and totally ignored for not wanting to abandon his son; a colonial subject loyal to a state that discriminated against him throughout his life. Fessahazien and his son are part of a story that Italy has gladly forgotten.

BTW, what happened to Fessehatsion in the end?

Sadly, the story is not complete. We do not know what happened to Girolama, one of the protagonists of the story.  Again, we do not know what happened to Claudio. The story mentions that he was being looked after by his father in Mogadishu - lived and studied in a boarding school. He was then forced to return to Italy around 1941. He enlisted as soldier in 1953, then, he disappeared altogether from the scene.

According to Fessehatsion’s youngest daughter who lives in Asmara, her father was deported from Somalia after the British took over. She said that her father was accused of working secretly for the Ethiopian emperor after the defeat of the Italians.  Again, we can only presume that he must have switched his allegiance (to Ethiopia) as soon as Italy was defeated.

As a business man he lived around Moyale, border town in South Ethiopia, for a while before conflicts started arising with the local people.  His business (traditional stone milling and producing soap) eventually collapsed as he could not quell the disputes.  Although his efforts were somewhat ‘appreciated’ by the emperor he was never graciously rewarded for his war efforts. He was given a military rank of Fitewrari by the emperor while he lived in Ethiopia. Fitewrari means Commander of the Vanguard; it can also be equated to a baron.

The story is extracted from four sources:

Asmarino.com apologises to its readers for presenting a story that is slightly incomplete.