The systematic stripping of Eritrea's   mineral resources continues. It is not enough for the Eritrean government to give foreign companies  such as Nevsun 60% ownership of the Bisha Mining, which has benefited the president and a  handful of cohorts, but has yet to trickle down to  the Eritrean population which continues to go  without electricity even in hospitals where the  recent blackouts caused  many deaths. The  Eritrean government's rapaciousness continues  as they enter into a partnership with South  Boulder Mines Ltd. The South Boulder Mines Ltd  is an Australian mining company, and its  headquarters is based in West Perth, Western  Australia.

The high grade, rich and concentrated Potassium Sulfate deposit is found in Colluli, in South East Eritrea, about 350 Km from the Capital Asmara, 180km from the port of Massawa and is very near to the town of Gelealo.

A feasibility study has been carried out and, preparation for the exploitation of potash is under way. As part of the preparation, the road from Culluli to Marena coastline is being fortified and rebuilt using the forced labour of underfed and overworked Eritreans in terrible living and working conditions.

Mereb Construction is a military construction company, set up by the Ministry of Defence, and run under Segen Construction Company (, which belongs to the Peoples Front for Democracy and Justice (PFDJ), the only political party in the country, was chosen for the road work. The workers for Mereb Construction are all conscripts who have been forced to work for six days per week and up to 12 hours per day, and paid, 500 Nakfa ($10 US dollars) per month. They are citizens who have been held in the military against their will for many years, and treated like slaves.

The Colluli Mining Share Company (CMSC) is a joint venture between the South Boulder Mines Ltd and the Eritrean National Mining Company (ENAMCO). ENAMCO, the mining investment arm of the Eritrean government negotiates terms and conditions with foreign investors. It is a three-person company which was set up by Isaias Afewerki a few years ago. Those three people are Hagos Kisha, (the Head of Economic Affairs of PFDJ), Yemane Gebremeskel (Director of the President's Office and presidential spokesman) and Berhane Habtemariam (the current Minister of Finance).

There is no transparency or accountability and neither the Eritrean Ministry of Energy and Mines, nor the Commercial Bank of Eritrea are aware of the management of the Mining resources and revenue in Eritrea. They do not know what is going on and they are not allowed to ask.

Everything is dealt with from the president's office, and so far the gold revenue from the Bisha Mining has been paid into the Bank of China, in China, and Gastom Bank in Russia. The revenue is paid in dollars. The government is also using two German banks, DV Bank, and Commerz Bank, which are both  in Frankfurt and used for illicit transactions and money transfer.

The size of the CMSC potash deposit sites is about 400km2, within the Danakil depression, with the possibility of expansion in the future. The estimated expected production is up to two million tonnes of potash per year, and the estimated annual revenue is also up to 2 billion dollars.

Reliable sources informed Human Rights Concern – Eritrea, that the Eritrean government had tried to push out the South Border Mines Ltd, and preferred to replace them with the Chinese company. The Chinese were chosen over the Australian because of their attitude to investment in Africa. The Chinese bring their own people to work, and they do not care whether the government that they deal with has the worst dictator in the world and  kills, tortures and otherwise  oppresses its own people. They do not care whether the indigenous labourers are equipped with safety equipment, or paid a reasonable wage. They are only interested in business.

Although the Eritrean government's choice was to deal with the Chinese, nevertheless the Australian company, South Boulder has resisted the push, reviewed its terms and decided to stay and pursue its first large potash deposit exploration, and earn millions of dollars in return, while the roads, their accommodations and the infrastructures are being built with forced labour.

While the joint ventures are longing to profit from the potash deposit in Eritrea, Eritreans in Eritrea are living in hell, and 4,000 of them are leaving Eritrea per month due to oppression and serious human rights violations by the Eritrean government.

While the joint ventures are longing to profit from the potash deposit in Eritrea, Eritreans in Eritrea are living in hell, and 4,000 of them are leaving Eritrea per month due to oppression and serious human rights violations by the Eritrean government. 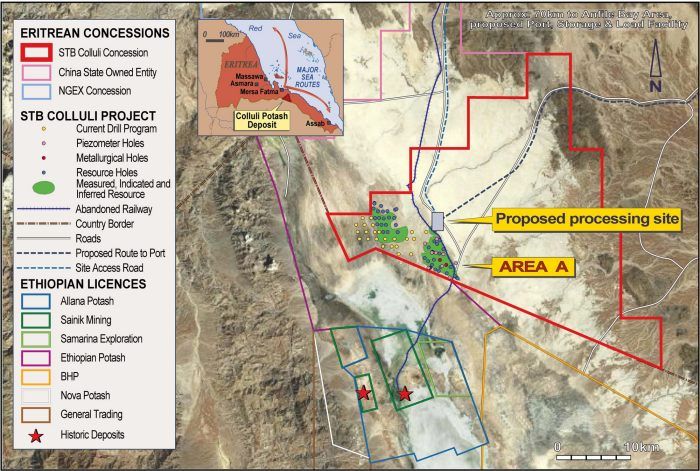