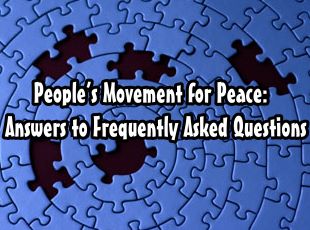 A couple of weeks ago, we had announced that an Eritrean peace movement was launched at a conference held in London in mid-December 2009. It was also announced that an enlarged follow-up conference will take place in May 2010. The aim of the forthcoming conference is to ratify and launch the draft peace charter, as well as to adopt an action plan. Different members of our communities world-wide have reacted to the initiative by raising some questions concerning the nature of the movement and its objectives. We are heartened by the interest the initiative has so far generated. We are therefore presenting our responses in a succinct questions and answers format. We hope to receive more constructive opinions and questions in the future. We shall do our very best to address them. We welcome every opportunity to engage with as many people as possible. This is because we firmly believe that peace can only be achieved through collective efforts based on mutual trust and respect.

If there are any more questions please, forward them to us at: This email address is being protected from spambots. You need JavaScript enabled to view it.