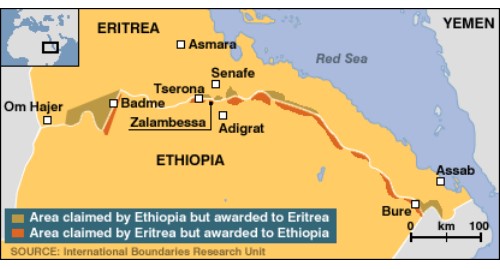 (Asmara 18-06-2016) According to Freedom Friday (Arbi Harnet) Activists in Asmara stare that residents of the capital continue to dismiss the recent exchanges of fire between Ethiopia and Eritrea as a mere attempt by the regime to distract attention away from the UN report uncovering crimes against humanity, whilst reports from Eritreans in the border region highlight a worrying trend of civilian casualties.

Arbi Harnet activists who have tried to establish the number of Eritrean casualties from last weekend’s heavy fighting between Ethiopia and Eritrea report that hospitals across the country have been receiving casualties but it is difficult to ascertain the extent of the damage. Activists stated  ‘Those who have been wounded on the recent fight in Tserona front have been taken to Dekemhare hospital, Halibet hospital [in Asmara] and Keren and Glass military hospital’ however efforts to ascertain numbers and identity of the casualties has not been successful due to the strict embargo on such information.

Meanwhile residents of Hazemo near the Tsoeona front report that the Eritrean army heavily shelled Eritrean villages during the weekend of fighting. Given that there is a 25 Km buffer zone, inside Eritrea incorporating many villages within this zon, it is likely that these villages might be shelled from both sides increasing the likelihood of civilians being caught up in the crossfire.

The Hazemo resident confirmed that ‘the Eritrean army frontline is located far from the border and there are many Eritrean villages and civilians between the  front and the border, hence many houses were burnt and civilians killed and wounded’.