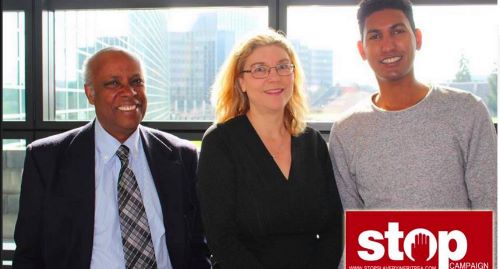 (Strasbourg 10-03-2016) Stop Slavery in Eritrea Campaign welcomes the European Parliament Resolution adopted today following a comprehensive debate yesterday. The resolution hailed by many observers as comprehensive and strong is historic for being the first such resolution on the situation in Eritrea.

An end to the practice of indefinite national service and demobilization of all recruits who have served the mandatory 18 months is among the many pertinent calls made by Strasbourg today, Stop Slavery in Eritrea welcomes this as an important first step towards restoring justice to thousands of young Eritreans who flee their country to avoid being conscripted or being enslaved indefinitely.

Campaigners contend that the national service in Eritrea is nothing but a form of modern day slavery where thousands of young people are captured and forced to work for free for an indefinite length of time and call on the European Parliament and Commission to use their influence in seeing an end to the practice that has led to thousands fleeing the country every month making the small country of six million one of the top five countries from where refugees originate. They state ‘A strong and unanimous resolution from the European Parliament will indeed go a long way in supporting our struggle for justice in Eritrea, we hope that the Commission will take due consideration of these calls and that MEP will continue to raise these issues until we see change in Eritrea’

In the resolution passed this morning the European parliament Urges the Government of Eritrea to:

The European Parliament also calls on the Eritrean Government to ensure that no one undertakes military training before they reach 18 years of age and that no members of the population past the normal conscription age are conscripted.