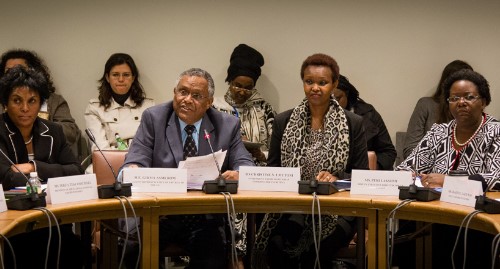 This is a formal complaint, addressed to the following United Nations (UN) organs: the Department of Political Affairs, the Head Offices of UNDP, UNFPA and UN Women in New York.

The signatories of this letter are concerned Eritreans who live in different parts of the world as exiles, due to the extremely repressive political situation in Eritrea.

This complaint is promoted by some misleading public pronouncements attributed to some UN staff members working for UNDP, UNFPA and UN Women (some of whom are senior officials), who recently spoke at a UN side event in New York. The event in question took place on 16 March 2015, celebrating Eritrea’s “achievements” on gender equality.

The statements attributed to the UN staff members are reported in a press release dated 17 March 2015, published by the Permanent Mission of Eritrea to the UN (copy of which is attached to this letter). The press release was posted in the official website of the Eritrean government: http://50.7.16.234/hadas-eritrea/Press%20release.pdf (later removed without any explanation or apology as explained below). The misleading statements as reported in the press release, are as follows.

Ms. Raquel Lagunas, UNDP Policy Advisor on Gender, is quoted to have said, in reference to Eritrea’s achievements in gender equality: “what Eritrea is doing is not only the right thing to do but the smart thing to do.”

The above bold statements are contrary to well-established facts about Eritrea, as articulated by other credible UN sources, such as Geneva-based treaty monitoring bodies, UN-mandated fact-finding missions, as well as the UN Human Rights Council. For instance, the statements in question fly in the face of grave concerns that are articulated by the Concluding Observations of the CEDAW Committee, adopted on 6 March 2015 (at the Sixtieth Session of the Committee). The Eritrean government’s dismal record in the area of women rights, particularly its failure to combat violence against women and the rampant practice of sexual violence by army commanders, was thoroughly scrutinized by the CEDAW Committee, leading to very negative Concluding Observations.

[W]e can already report on very clear patterns of human rights violations and on our systemic understanding of them … Most Eritreans have no hope for their future: national service, whether in a military unit or in a civil assignment, is the only thing that from the age of seventeen they can expect to spend their life doing – paid between less than one and a maximum of two dollars a day … there is no rule of law in the country; and no one is being held accountable for violating the rights of groups or individuals … Eritrea is a country where detention is an ordinary fact of life, experienced by an inordinate number of individuals – men and women, old and young, including children; where detention centres are official and unofficial, above ground and underground, metal containers in forbidding heat or mere fences with no shelter for inmates in punishing cold; where once in one of them, there is a likelihood that you will be subject to torture to extract a confession or to simply punish behaviours.[1]

Added to the above are two other authoritative reports by the UN Special Rapporteur on the Situation of Human Rights in Eritrea (Ms. Sheila B. Keetharuth), which portray a very bleak picture of the state of human rights, including women’s rights, in Eritrea. Since 2012, the UN Human Rights Council has repeatedly asserted that the problem in Eritrea is that of “continued widespread and systematic violations of human rights and fundamental freedoms committed by the Eritrean authorities.”[2] In the lexicon of atrocity crimes, this amounts to a situation of crimes against humanity, as also noted in the Notice of Claim of three Eritrean plaintiffs, submitted on 20 November 2014 to the Supreme Court of British Colombia in Vancouver, Canada.[3]

In the press release of the Eritrean Permanent Mission to the UN, there was another fundamentally erroneous assertion attributed to Ms. Christine Umutoni, UN Resident/Humanitarian Coordinator in Eritrea.[4] She is reported to have “emphasized her assessment that when compared to many other civil society organizations from her vast experiences, the National Union of Eritrean Women is one of the most effective community movements with a high level of accountability and efficiency.”

In the above statement, the National Union of Eritrean Women (NUEW) is erroneously portrayed as a civil society organization (CSO) or alternatively as a community movement. As a matter of fact, NUEW is a GONGO (government-operated non-government organization) that masquerades as a CSO or community movement for purposes of lip service. This was actually one of the main problems by which reason the Eritrean government was criticised by the Concluding Observations of the CEDAW Committee, adopted on 6 March 2015, as noted below:

[The CEDAW Committee] regrets that the State party has not yet changed [NUEW’s] legal status as a non-governmental organization, nor provided it with executive powers, which impedes the Union’s ability to effectively respond to the current challenges. The Committee is also concerned about the insufficient human and financial resources allocated to the national machinery to ensure its adequate functioning.[5]

Seen against the above sound observations of the CEDAW Committee, Ms. Umutoni’s description of NUEW as a CSO or a community movement is completely out of touch with reality.

At a time when the Eritrean government is under thorough scrutiny by the international community for its abhorrent record of human rights violations, including violence against women, the inaccurate statements made at the New York side event have the unfortunate consequence of undermining other credible findings by other UN-mandated legitimate processes.

The fact that the statements in question were communicated in the same day when the COIE presented its oral update (interim report) to the UN Human Rights Council in Geneva does not come as a good sign in terms of the requirements of aligning UN-mandated activities, supposedly working in the same area of concern, such as the promotion of a rule of law-abiding political system in Eritrea in which context women’s rights are better understood. Indeed, at a time when Geneva-based UN organs, processes and experts, such as the Human Rights Council, the CEDAW Committee, the COIE, the Special Rapporteur (Ms. Kheetharuth), are working hard to ensure accountability for the situation of grave human rights violations in Eritrea, it is enigmatic to observe that some New York-based UN entities going in the opposite direction of what the former group of UN organs are doing. To our understanding, this is also contrary to well-known UN approaches of safeguarding human rights, such as the “rights-based approach to development,” and the UN Secretary-General’s Human Rights up Front (HRuF) initiative.

We note that the original press release of the Eritrean government was later removed from its official website and replaced with a milder and short news item still available at this link: http://www.shabait.com/news/local-news/19407-eritreas-achievements-in-gender-equality-commended-at-meeting-held-in-new-york-city-. This could have happened possibly as a result of an initial complaint communicated to the office of Ms. Umutoni in Eritrea (by email dated 19 March 2015). Nonetheless, the original press release was removed without any explanation or apology on the side of the Eritrean government, or any feedback from Ms. Umutoni’s office on the initial complaint. In our view, professional courtesy requires that Ms. Umutoni’s office respond to the initial email on a timely fashion, with explanation on the concern raised in the same email. Sadly, this does not seem to be happening as we write this letter.

To sum up, we stress that the UN speaks with one voice and expresses the situation in Eritrea like it is: an alarming record of human rights violations. Indeed, Eritrea is now the only country in the world (after North Korea) for which the UN has mandated a Commission of Inquiry, to investigate alarming levels of human rights violations, taking place in a situation that does not involve armed conflict. This cannot be ignored in any context.

We believe that the misleading statements discussed above seriously compromise the obligation of the concerned UN staff members to maintain the highest standard of honesty, integrity and truthfulness, as indicated in some UN official documents, such as paragraph 19 of the UNDP Legal Framework for Addressing Non-Compliance with UN Standards of Conduct.[6] Thus, we call on the relevant UN organs to take appropriate measures to rectify the problem we have addressed in this letter.

We look forward to hearing from you.

Thank you in anticipation of your cooperation.

(A complete list of signatories is attached in the next page).

[1] Interim Report of the COIE [Oral Update by the Chair of the Commission to the UN Human Rights Council], 16 March 2015, available at http://www.ohchr.org/EN/NewsEvents/Pages/DisplayNews.aspx?NewsID=15699&LangID=E [emphasis added].

[4] In some sources, Ms. Umutoni is also referred to as UNDP’s Representative in Eritrea in addtion to the post described above.

[5] Committee on the Elimination of Discrimination against Women, Concluding Observations on the Fourth and Fifth Periodic Reports of Eritrea, 6 March 2015, CEDAW/C/ERI/CO/5, paragraph 14.