According to the UN definition, “the Universal Periodic Review (UPR) is a unique process which involves a review of the human rights records of all 192 UN Member States once every four years. The UPR is a State-driven process, under the auspices of the Human Rights Council, which provides the opportunity for each State to declare what actions they have taken to improve the human rights situations in their countries and to fulfil their human rights obligations. As one of the main features of the Council, the UPR is designed to ensure equal treatment for every country when their human rights situations are assessed”. 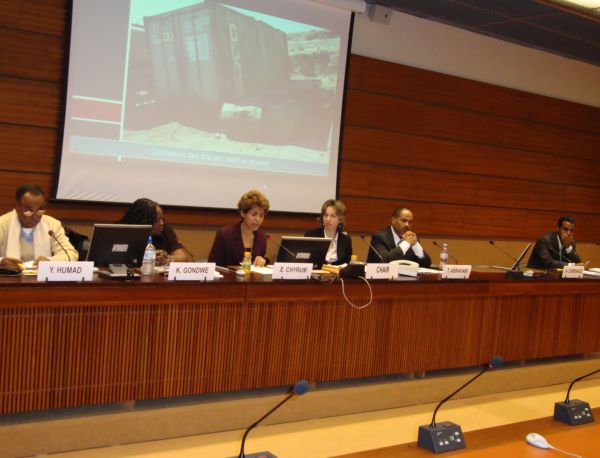 Eritrea was reviewed on 30th November and the delegation was lead by Mr Girmai Abraham, Economic Advisor, Ministry of National Development. Four days earlier, the Eritrean government submitted its own report on the human rights situation in Eritrea: http://lib.ohchr.org/HRBodies/UPR/Documents/Session6/ER/A_HRC_WG6_6_ERI_1_E.pdf
As was to be expected, it was filled with 21 pages of pure fantasy, it was as far from the truth of the situation in Eritrea as could be imagined.

Many UN member states submitted advance questions and comments and recommendations on the human rights issues in Eritrea. Here are examples of advance questions to Eritrea by some countries:  http://lib.ohchr.org/HRBodies/UPR/Documents/Session6/ER/ERITREA-Add.1.pdf
http://lib.ohchr.org/HRBodies/UPR/Documents/Session6/ER/ERITREA.pdf

The information contained in the Eritrean report can be refuted in so many ways, and it is hard to know where to begin. The term ‘rapid economic growth’ is spurious in the context of a country whose government does not allow any form of private enterprise; whose population aged 18-50, is forcibly conscripted into a pointless army which the government cannot even feed properly; whose university has closed down; whose land has been confiscated or appropriated by the government?

Eritrea is a country whose national assembly has not been convened since 2002. All courts are corrupt. Any lawyers who are allowed to practice law can do so only in the government’s favour.

Hundreds of thousands of citizens are held incommunicado in prison without trial and with no legal representation, and no chance of release. Prison conditions are inhumane.

The report speaks of ‘the Eritrean people having a long tradition of honouring human dignity’. How dignified is to be tortured without reason; to be raped by security forces, military commanders and prison guards; to go hungry every day of your life whether you are a child, a woman, a man or elderly; to be threatened or to have your family threatened if you do not toe the line in every respect? There is no dignity in a totalitarian country. Isaias Afewerki is a dictator with a long tradition of cruelty and dishonesty.

All of the above has been documented and can be checked and verified so long as one does not have the misfortune to be actually living in Eritrea, where it is illegal to leave. 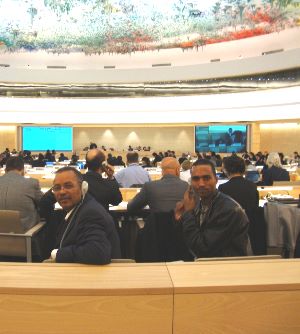 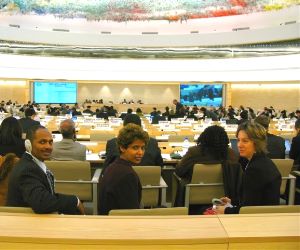 The phoney report refers to the ‘constitution’ as if Eritrea had ever implemented it. The so called ‘constitution’ in Eritrea is just a piece of paper which has been ignored despite its ratification in 1997. Isaiais Afewerki rules by ever-more unreasonable decrees.

Human Rights Concern-Eritrea (HRCE) attended the UPR review and held a round table meeting with Christian Solidarity Worldwide and Jubilee Campaign,  at which delegates, NGO members and journalists were also present. HRCE and CSW also held meetings with delegates from various countries following the UPR review.

At the roundtable meeting, Elizabeth (Elsa) Chyrum of HRCE presented the over-view of the human rights situation in Eritrea. Dr Khataza Gondwe of CSW presented the report on the lack of religious freedom in Eritrea. Mr Tedros Abraham spoke of his own experience as a journalist in Eritrea and of the lack of press freedom in a country where many of his colleagues have been jailed and some of whom have since died in custody. Yassin Mohammed Humad  of  Suwera Centre for Human Rights also talked about the horrendous human rights abuses in Eritrea and its historical background.

Amha Domenico from Europe, Abdulraziq Kerrar from Australia, Weldeyesus Ammar of EPP, Goitom  Kiflom and Said Saleh of Eritrean for Peace and Democracy in Switzerland also attended the UPR review and participated at the round table meeting. Due to flight cancellation Semere Habtemariam form USA missed the morning session, but participated at the UPR follow up meetings.

The following day, Elizabeth Chyrum met with UNHCR officers at their headquarters to address the Eritrean refugees’ issues. The Human Rights House Foundation has also organised a meeting in their office and it was attended by Semere Habtemariam, Abdulraziq Kerrar, Floriane Irminger, Elizabeth Chyrum, Yassin Mohammed Humad, Amha Domenico and Niels Jacob Harbitz to discuss the UPR review and what steps could be taken in future. 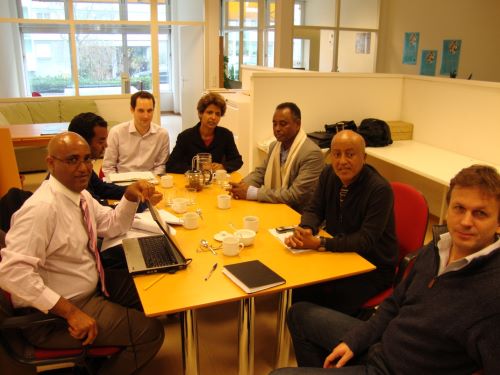 It is evident that the international community is aware of what goes on in Eritrea and that they have made demands albeit couched in diplomatic terms, of Eritrea to implement the constitution, to stop arbitrarily detention, abolish ‘special’ courts, stop sexual violence against female conscripts, allow religious freedom, press freedom, political and civil rights, establish human rights organisations, and human rights commissions, restore education, and university, stop recruitment of minors and indefinite national service and release prisoners of conscience, to name but a few of the many human rights issues that need to be addressed in Eritrea; but these too are only words, and we can see from the 21-page document produced by Eritrea’s spin doctors that words can be manipulated and that their meaning has been neutralised by the Eritrean delegates sent to misrepresent the reality of life in Eritrea today.

The reality is that people die of hunger on a daily basis in Eritrea, and a four yearly review is not enough to rescue them.

The good thing about the UPR review is that the Eritrean government was at least publicly questioned about its failure to implement its constitution, and its failure to provide any kind of decent living conditions for its people, not even the right to food. They have been shamed in the eyes of the world.