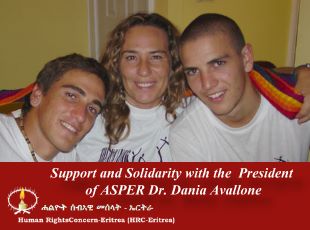 Human Rights Concern – Eritrea (HRCE) would like to express its support and solidarity with the  President of the Association for the Protection of Human Rights of the Eritrean People (ASPER), http://www.asper-eritrea.com), Dr. Dania Avallone, in her ongoing fight against the lies and attacks perpetrated by supporters of the Eritrean dictatorship against her in Italy.

Mr Woldu Yohannes, in the name of The Association of the Eritrean Communities in Italy, has filed a defamation charge against Dr Dania Avallone in an Italian court and the first hearing will take place on 15th of April 2009. Some of the accusations are that Dr Dania Avallone called the Eritrean president a ‘dictator’, publicly denounced  the violations of human and civil Rights in Eritrea, accused the Association of Eritrean Communities in Italy of supporting and sponsoring the bloody dictatorial government in Eritrea, disturbed their festivals and events by organising protests outside those events, etc..

What is distressing is that in a democratic country such as Italy, supporters of a dictatorship can attempt to use a democratic law to fight against the truth.

We would like to take this opportunity to show our solidarity for her dedication and commitment to making public the horrors of the Eritrean regime, a dictatorship whose defenders are trying to pass off as a ‘democracy’

Dr Dania Avallone has had first-hand experience of arbitrary detention, interrogation, intimidation, harassment and finally expulsion from Eritrea after working as a Marine Biologist and living there for 10 years. Many of her Eritrean friends are still in prison, incommunicado and without charges.

This is not the first time she has been attacked by supporters of the Eritrean government in diaspora who will try anything to stop her from speaking20the truth as they continually do to us and other human rights defenders in diaspora.

We hope that the recent allegations made by  Mr Woldu Yohannes, and his associates will be seen for the ridiculous lies that they are, and that they will be dismissed on April 15th when the process begins. The action is an attack on all Eritreans and friends of Eritrea who have been raising awareness of and fighting against human rights abuses in Eritrea.