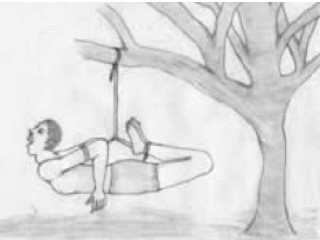 ASMARA, April 1 (Reuters) - You can see the wounds on the Eritrean woman's arms and legs. Torture wounds, she says. She can barely walk without help.

"We spent 23 hours a day in a cell underground. The heat was unbearable," she said. "We were barefoot and made to walk on sharp rocks and thorns for one hour each day. If we did not walk fast enough we were beaten with hard, plastic rods."

The woman -- who asked not to be named because she said she feared for her life -- is a member of one of Eritrea's banned faiths, made illegal by a decree in 2002 and whose members are routinely arrested, rights groups say, for their beliefs.

In Eritrea, stories of arrests or worse are not uncommon, rights groups and diplomats say.

"Arbitrary arrests and detention, torture, extrajudicial killings, severe restrictions on freedoms of expression and worship, and forced labour are routine," it said.

"In addition to beatings, punishment entailed being hung up by the arms from trees, tied up in the sun in contorted positions for hours or days, and subjected to mock drowning."

But Asmara fires back at rights groups, saying they are trying to undermine Eritrea's sovereignty, won in 1991 after a brutal 30-year independence war with Ethiopia.

Eritrea says that nations like the United States should look at their own human rights problems before passing judgement.

An Eritrean man who approached Reuters on the street said that he had been picked up by military police -- a common sight on the streets of Asmara -- and held for days.

"It was my fifth arrest for no clear reason. At least, they don't tell you what the reason is," he said. "That's about average for someone my age. Sometimes they lock you up for a few days, sometimes a few weeks. There is no way of knowing.

The more it happens the less wrong it seems. You just accept it. It is like you get pulled over by a traffic cop in your country, you don't think that it is unusual or unacceptable, it is just part of the system, part of the way things work between the government and the people."

Eritrea generates one of the largest numbers of refugees of any nation not at war, rights groups say. They say tens of thousands flee every year. The entire national football team who fled last year.

Isaias has told Reuters that western intelligence agencies were luring Eritrean youth out of the country and that the young Eritreans were only going outside for "a picnic".

"It is sometimes very perplexing for me. Why all these lies? Why do you have to go and cook such statistics and make statements about the reality in Eritrea when you don't even know what's going on in this country?" Isaias said in October.

Eritrea says that national service is necessary due to a "no war, no peace" situation with neighbouring Ethiopia following the 1998-2000 border war that killed 70,000 people.

But diplomats and rights groups say that Asmara uses its dispute with Addis Ababa to keep the nation under tight control.

"On one hand you say, this is my country and I want to stay and help it get better, but on the other hand, I want to be free to think for myself and say what I want and follow my own path ... It is very hard to decide, stay or run," the Eritrean said.

In one of the world's least developed nations, there are few relief organisations, most have been expelled or left because of restrictions on their work.

Eritrea has traditionally shunned aid and assistance, preferring the mantra of self-sufficiency. Now humanitarian agencies are pleading to help.

The U.N. Food and Agriculture Organisation estimated last year that as many as two in every three Eritreans were undernourished.

Eritrea's president in an interview with state media has pledged "no hunger in 2010" and denied any food shortages. (Editing by Giles Elgood)