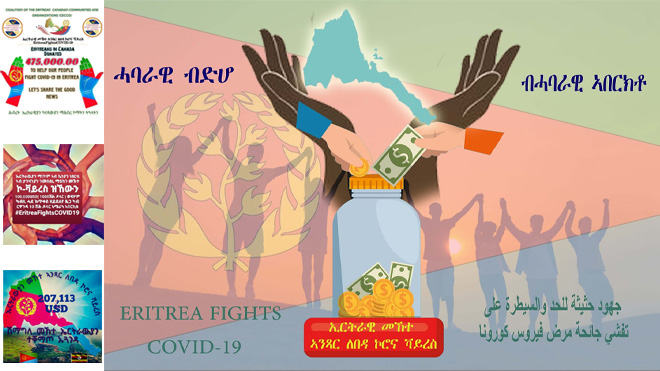 To gain insight into how the Eritrean state media is communicating about the coronavirus pandemic to the outside world, AIM examined announcements that have been posted on Shabait.com by the Ministry of Information since March of this year.

The Covid media campaign started on 11 Mar 2020 through the first statement:  “Timely Public Announcement”.  “Not a single person has been infected in Eritrea to-date”, the announcement stated.

Around 150 announcements, whose contents are similar, of course, except for the changing figures, have been posted to date.  The latest announcement reads as follows:

AIM observed three recurring behaviours: a) sharing unsubstantiated positive stories and promoting the regime’s ‘prompt’ pandemic response; b) narrating the story in a manner favourable to the PFDJ as the coronavirus pandemic continues to evolve; c) and using incessant fundraising ads to dupe the public into contributing ever more money.

Although spin is not unique to state actors, the ads campaigns to promote government-run media claims containing misinformation and money-grabbing schemes are becoming more and more apparent.  AIM’s findings suggest that platforms should implement clearer disclosure of state-sponsored communications that are impossible to verify, and demand where the incongruously and unaccountably collected money from the gullible public is going.

The same repetitive announcements are accompanied by appeals for “contribution to augment the National Fund."  Which National Fund?  PFDJ coffers?

The appeals are designed in such a way they revere the contributors while making others uncomfortable for ‘failing’ to contribute - with the implied objective of shaming them. This practice is used as an instrument of public policy intended to promote compliance with government arm-twisting-techniques or with the obligation to put right the 'damage' caused by non-compliance.

AIM contacted a few households in Asmara if they are receiving any assistance from the government while they are under lockdown.  The responses were negative.

How can the Eritrean regime, a top-notch source of alternative facts, with its long history in plagiarism and fabrication, be trusted with the millions it is raking in?  AIM’s researcher stated that the regime’s glossy coverage and dazzling management of the pandemic is too good to be true. And there is no evidence whatsoever the money is being put to use properly.

The regime also collects money under the aegis of “Support to disadvantaged families.”

Here is a randomly picked announcement that appeared on 11 July 2020: "According to the daily report from the Ministry of Health, cooperative association of former members of the office of secretariat contributed 50 thousand Nakfa, and several cooperative associations, administrative areas as well as small scale businesses contributed a total of over 37 thousand Nakfa."

How do we verify the ‘positive’ COVID information which the regime is presenting day in, day out? The simple answer is there is no way to confirm government claims – it is only a ploy for self-aggrandizement.  Again, how do we keep the regime accountable with all the money it is embezzling from the unsuspecting contributors?  Again, the answer is a simple thumbs-down.

The regime is simply doing what it does best during exigencies.  It is exploiting the pandemic brazenly by providing false projections of the realities on the ground.

The regime may weaponize its deceit, control and deploy its state-actors to spread falsehoods, but it cannot deal with whistle-blowers.