BY SELAM KIDANE AND MARTIN PLAUT 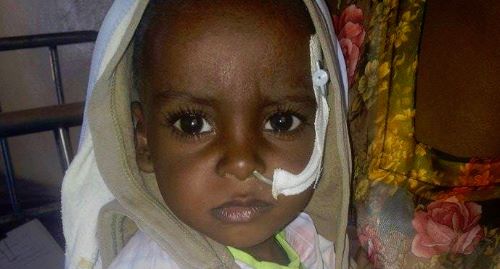 Nurses have been banned from using cellphones, but have smuggled out images.

A devastating famine has hit the Horn of Africa. El Nino has taken a terrible toll on the people across the region and Eritrea is no exception. The coming famine across the Horn was covered by the New Statesman a year ago, with predictions of its severity which have tragically come true.

An appeal by the UK’s Disaster Emergency Appeal has raised over £54m four weeks after it was launched. But unlike the victims in Somalia, Ethiopia and Kenya, the people of Eritrea are unable to benefit from this generosity.

The reason for this tragedy is simple: the Eritrean regime, led by the dictatorial Isaias Afewerki, is refusing all outside help. Denial is official government policy. Quoting the President the official media declared in January 2016: “The country will not face any crisis in spite of reduced agricultural output.”

But evidence of the scale of the suffering, particularly among the children, is now filtering out. It is being smuggled out by men and women of the "Freedom Friday" resistance network, at great personal risk. If they are discovered they will be jailed, indefinitely, and almost certainly tortured.

Nurses and carers working in clinics across the country have been banned from using their cell-phones, but some have dared to take the images below and sent them abroad, in a desperate attempt to make the plight of these children know.

These photographs are from the town of Mendefera. Normally a bustling market town, in the fertile Southern region of Eritrea, it has a range of small scale factories that provide employment and an income.

But villagers in the vicinity, including Areza, Mai Dima, Awha, Adi Quala, Mai Mine, Enda Gergis, Adi Felesti, have been badly hit by the drought. These pictures are from the clinic in Mendefera, to which the children have been brought. The pictures and the information has been anonymized, for their security.Since January this year 66 children, many of them babies, have been brought into the clinic suffering from acute forms of malnutrition the clinics were unable to cope with. Many revived, but two died and a further four children were sent to Asmara for specialist treatment.

They suffered from the swollen bellies typical of kwashiorkor, a severe type of malnutrition - the result of an extreme shortage of protein in their diet. The symptoms include swollen abdomens, skin disorders (hypo and hyper pigmented skin) and excessive fluid retention throughout the body.

Health workers believe they are only seeing the tip of the iceberg. Most children are simply not being brought to the clinics and the actual scale of the crisis is much more severe.

In other areas of the country the situation is, if anything, more dangerous.

There are reports of cholera in the area around the western town of Barentu. Villagers are having to draw water from pits dug into the Mereb river.

More than 1,300 patients were registered at one makeshift clinic when these images were smuggled out of the country in October last year. Thirteen deaths had been registered by the health workers. Teams of doctors were sent into the area to try to halt the spread of the cholera while roads were closed, transport halted and movement into and out of the effected areas has been tightly controlled. Members of the local militia, the police and the army were closely restricting movement.

There were reports of medical teams being sent to attend the cholera outbreak in remote areas, leaving their the patients in hospital unattended. The medics said there is constant pressure from security agents, who warn them warn them not to take any photos not and tell any one about what is taking place.

An aid worker operating inside Sudan described families crossing the border to seek aid. He said that those who arrived spoke of acute shortages of food and water. These people come from the remote regions of western Eritrea where villagers are used to some of the most challenging of circumstances. If they believe it is time to pack up and leave the situation must be very serious indeed.Government in denial

Obtaining accurate information from Eritrea is extremely difficult, since the government prevents aid agencies and many UN organisations from operating.As one crisis warning system put it: “The Eritrean government severely restricts the access of humanitarian actors inside the country. Very little is known about humanitarian needs: Unicef estimates that the total affected population is 1.5 million.”

The UN’s children’s agency, Unicef, reported that: “Data from the Nutrition Sentinel Site Surveillance system indicates an increase in malnutrition rates over the past few years in four out of six regions of the country, with 22,700 children under five projected to be affected by severe acute malnutrition (SAM) in 2017.

This crisis was not unforeseen.

A year ago, aid agencies were already warning that the situation was looking bleak. Satellite imagery showed the scale of the looming drought.

Current maps of the region now show no information for Eritrea: it is almost as if the country has vanished from the face of the earth.

Eritreans have become the silent victims of their President’s unwillingness to call for aid, and the inability of the international community to come to their aid.