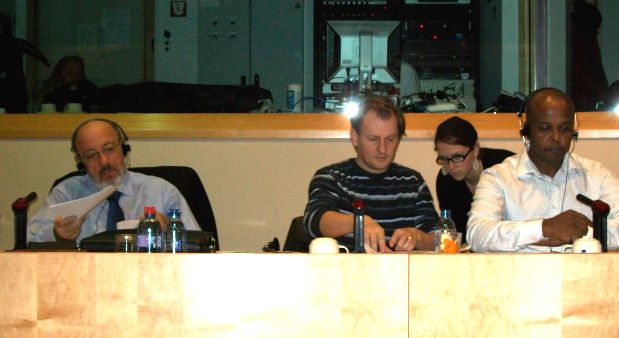 A public hearing on the plight of Eritrean-Swedish journalist, Dawit Isaak, was held at the European Parliament on 9 December 2009. The following is a personal account of the hearing, with emphasis on the part which intrigued me most. I share this account based on hand-written notes I took during the hearing. If there are any inaccuracies, I stand to be corrected but I don’t mean to misquote anyone or misrepresent anyone’s presentation.

The hearing was initiated by four Swedish parliamentarians: Olle Schmidt (MEP ALDE), Eva-Britt Svensson (MEP GUE/NGL), Isabella Lovin (MEP Greens/EFA), Carl Schlyter (MEP Greens/EFA), and Marita Ulvskog (MEP S&D). In a brief background paper of the hearing, the parliamentarians state that they are urging the EU institutions to stop supporting the Eritrean government (via development aid) when Dawit Isaak and thousands are imprisoned in the country. They clearly state that it is a contradiction to condemn the regime for violating human rights, as has been done by the European Parliament continuously, and on the other hand to continue supporting the regime by development aid, as is done by the European Commission (EC). In their words, aid should be conditioned and the country should fulfill its human rights obligations, “otherwise the EU pays for the violation of these rights.” The background paper concludes by calling on the EU to stand up for human rights in Eritrea: “the European Parliament is acting and it is now up to the European Commission and the European Council to take action.”

The background document has said it all clearly.

After a welcoming note by Mr. Schmidt and Ms. Svensson, the opening speech was given by Mr. Louis Michel (MEP ALDE), Co-President of the ACP-EU JPA, and former Commissioner for Development and Humanitarian Aid at the EC. In addition, there were two panels with the following speakers: Leif Obrink, President, Free Dawi Isaak Campaign (support organization); Esaias Isaak, a brother of Dawi Isaak (in the first panel); and in the second panel: Jeremy Lester, an official from the EC; Ernest Sagaga from International Journalists Federation. 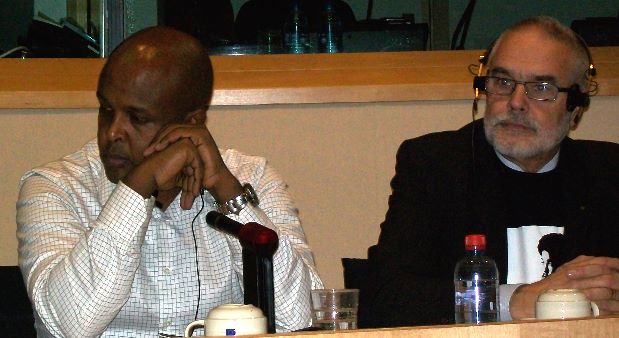 All the speeches, starting from that of Mr. Michel to that of Esaias Isaak and others, focused mainly on the fate of Dawit Issak, on how he was arrested, his current status, future prospects of release, etc. In this context, speakers also addressed the general human rights crisis in Eritrea. The speech by Esaias Isaak was so heart-breaking, as it narrates the anguish the entire family has sustained since the arrest of their brother. Next to that the most notable speech (at least to me) was that of Mr. Michel, a person who has now become well known among Eritreans due to his key role in the approval of the latest package of “development aid” to Eritrea. Besides, he is also generally seen as a close friend of the Eritrean president, simply because he is probably the only senior European politician who had several contacts with the president in the past few years.

Mr. Michel gave several assertions many of which were intriguing, so intriguing because he was incredibly frank in depicting a very clear picture of the Eritrean president and matter-of-factly I didn’t expect this from a person who is seen by many Eritreans as a close friend of the Eritrea president. He spoke like we never heard him before. He started his speech by apologizing on the fact that he had no good news to tell about the release of Dawit Issak, although he tried his best for quite long time, particularly during his last trip to Eritrea in August 2009.

According to him, Eritrea is the only country in Africa to which he has been five times in two and half years while he was in the EC. He said during his visits he tried to improve things. He even invited the president to an official visit in Brussels, hoping that things would change positively but his attempt was not successful, he added. In fact, he says things have worsened every year. Between his first and last visit to Eritrea, he said he saw no progress on the part of the Eritrean president. I was astonished to hear Mr. Michel telling the audience that relations with the Eritrean president have indeed become more difficult now than they were three or four years back. In explaining this, he drew a striking comparison between the tendency of the Eritrean president and what he has observed in the behavior of Fidel Castro during his last months in power. The common element is that they live in a state of mind which suffers from utter denial of objective reality, rejecting real problems on the ground and saying that everything is alright. I understood the explanation to mean that the Eritrean president is utterly suffering from a high level of idiosyncrasy. 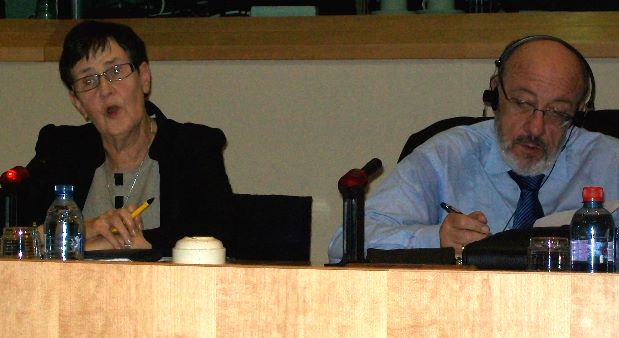 Mr. Michel added this kind of tendency deprives a person from a rational approach to dialogue. In fact, he was so frank in stating that most of his engagement with the Eritrean president was a monologue rather than a dialogue. The man talks a lot and once he starts talking he doesn’t want to stop. Like Fidel Castro, the Eritrean president also speaks on some issues with a great deal of obsession and unnecessary technical detail, denying completely what is happening on the ground. He seems to be always occupying himself with everything. He can, for example, explain all the technical issues of security or transportation. On this particular issue, Mr. Michel tried to explain the scenario by giving an example of how Mr. Castro once tried to convince him on the content of carbohydrate in a certain food item (which according to the issues at that time was completely irrelevant or replete with excessive obsession to detail). In that kind of situation, he hinted, you only have to listen to them. At this point, I thought in several of his visits to Eritrea Mr. Michel was also probably assuming the role of a clinical psychologist in addition to his tenured position as a politician/diplomat. Indeed, it requires a lot of patience and endurance to simply sit and listen to what has to be said in an unconventional behavior.

Another point Mr. Michel stated is the sense of victimization deeply engrained in the mentality of the Eritrean president. Apparently, the president thinks he has been victimized (in the context of the Eritrea-Ethiopia border conflict and regional issues) by the international community. He thinks everybody is against him and he has internalized this belief to an extent that it has now clouded his rationality. There was an indication by Mr. Michel that at some stage this was one of the factors that made him to engage the Eritrean president rather that confront him head on, but sadly this approach has not borne any fruit.

The level of openness in Mr. Michel’s speech was clearer in no other part than that which narrates his last trip to Eritrea. This was particularly in relation to his efforts with regard to the release of Dawit Isaak. The day after he left his position in the EC, he says, he was approached by the Eritrean Ambassador in Brussels. The ambassador told him the Eritrean president wanted to speak to him urgently in Asmara. At that time, the issue of Dawit Isaak was already top on the agenda. As a result, he informed the ambassador that he would go only if Dawit Isaak was to be released. The ambassador gave him assurance on this and Mr. Michel happily travelled to Asmara in August 2009. In fact, believing that he would come back with Dawit Isaak, his colleagues booked a seat for Dawit on the same flight that brought Mr. Michel back from Asmara.

After arrival in Asmara, he was dismayed to find that Dawit Isaak was a non-issue on the part of the Eritrean president. The reply to his request was a brutal no. The Eritrean president has previously stated to him that the issue of Dawit Isaak (as a Swedish citizen) is to be resolved in a bilateral discussion with Sweden and not with the EU. On that occasion again, the president repeated the same explanation. Knowing that Dawit Isaak was not to be released, he asked the president to allow him to visit the prisoner wherever he might be. This never happened and it came as a very disappointing experience, according to Mr. Michel, who also said he was offended and humiliated by the actions of the Eritrean president, including the empty promise (scandalous as it is) given to him by the Eritrean Ambassador in Brussels.

Another illustration given by Mr. Michel to explain the obstinacy of the Eritrean president is that which says the president has little or no interest in boosting diplomatic relations. For example, when the new US administration wanted to send to Eritrea Mr. Johnnie Carson, an official from the US Department of State, the Eritrean president insisted that he wants to talk with Hillary Clinton or Barack Obama. In relation to this, several letters were sent to the Eritrean present from the American government to which he did not reply even after several days. In spite of such confrontational (brutal and head on) approach, Mr. Michel says he tried his best to keep a good relationship, a relationship of trust with the Eritrean president, but he didn’t get what was promised to him. He added that he had done everything he could, listen to the president, never denounce him in public, show patience, and he thought that this would bring something in return. It never happened.

The final remark by Mr. Michel was about his proposed visit to Eritrea. This time around he would go as a delegate of the European Parliament. This was also stated in the welcoming note by Mr. Schmidt and Ms. Svensson. Recently, the European Parliament decided to send a letter to the Eritrean president, a letter that must be handed to him personally. The parliament thinks this job can be best done by Mr. Michel and he has accepted the request. The date of his visit is not yet specified but Mr. Michel suggested that it could be before end of this year or early next year. What will happen: let’s wait and see.

After hearing the detailed confession of Mr. Michel I didn’t have the stamina to ask questions. I thought what he said was more than enough but after closure of the hearing I regretted for not asking at least one.

His speech comes as the most revealing depiction of the Eritrean president from an international observer who has worked with him closely until lately. This comes rather at a belated time, particularly in light of the immense damage the country has thus far sustained as a result of the president’s arrogance. But I very much hope that the policy makers at the EC have a lot to learn from this, although this may not come as something new to them. The only new thing is that, we as Eritreans, this is our first time to hear Mr. Michel speak honestly on the real challenges in Eritrea; perhaps he is at liberty now to speak so – as he is no longer in the EC.