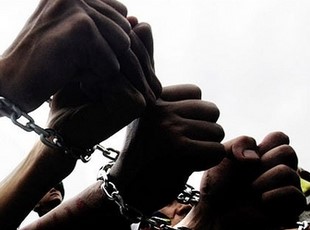 ICFC has learned the recent death of four young Christians who were kept in an underground dungeon at Assab for nearly six years.  In addition, four others who were kept in the dark hold of one of the many underground prisons for months went blind following their sudden exposure to Assab’s piercing sunlight.

The port city of Assab is located in the Southern Red Sea Region on the west coast of the Red Sea.  It is reputed for being one of the hottest places year-round anywhere in the world with the temperature soaring to 120°F during the dry season.  National Geography describes the place as the “cruelest place on earth” and that “it's hard to imagine a more brutal landscape.” Since the Ethio-Eritrean border conflict of 1998-2000, Eritrea keeps a huge army in and around the port city.

While well-documented systematic religious persecution throughout Eritrea has been an established policy of the autocratic regime - particularly since May, 2002 – the situation in Assab has been most disturbing in its extent as well as the sheer cruelty of the torture of the men and women of the armed forces who profess their Christian faith.

According to our eye-witness sources, there are several holes dug in this unforgivable and hostile desert where varying numbers of Christians are kept.  They receive a daily ration of three pieces of bread, a cup of tea in the morning and only three cups of water.  The group of five men who were held in one such hole in the ground was allowed to come out for 15 minutes a day.  After six years in such a condition, all of them were emaciated beyond recognition.  While four of them finally succumbed to death, one person was released.  He has since escaped to Sudan.

Another group of four prisoners who were considered “unrepentant” were not at all allowed to see daylight during much of the five years of their imprisonment.  They just wasted away in the filthy dungeon. A few months ago, for some inexplicable reason, they were taken out of the dark hole in the ground.  With sudden exposure to the glare of the sun’s rays, all four of them went completely and permanently blind.

ICFC has learned that the express reason for such cruelty is to break the will of the prisoners and force them to sign confessions recanting their faith.  Former prisoners who were held in similar underground cells in some of the hundreds of similar places throughout Eritrea report similar efforts by sadistic officers and guards.

The men who were rendered blind have recently been whisked out of the country because of warnings they had received for discussing their story.  Once free, they have remarked: “Yes, our jailers were able to take away our eye-sight, but they will never be able to break our morale, our spirit and our faith.” ICFC hopes to have a video presentation by one or more of the victims.

Eritrea is one of 8 countries listed by the US State Department as CPC (Countries of Particular Concern) for its flagrant abuse and persecution of Christians.  Evangelical and Charismatic churches have been ordered closed since May 2002.  Nearly 3500 Christians are languishing in prisons.  Tens of thousands have fled the country.  Scores of church leaders, including the Patriarch of the Eritrean Orthodox Church and priests, remain in prison.

SACS once again calls for the immediate release of all prisoners of conscience and the restoration of the rights of Eritreans to freedom of worship.

(ICFC is the website of SACS, a human rights and charitable organization dedicated to advocating religious freedom in Eritrea. For more information on religious persecution in Eritrea, visit: www.InChainsforChrist.org (Voice of the Persecuted Church in Eritre).