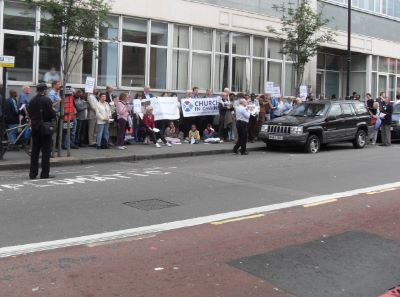 (London 28-05-09) around 80 people from all walks of life and from across the united Kingdom and Republic of Ireland gathered outside the Eritrean Embassy in the London to protest religious persecution in Eritrea.

The rally that was jointly organised by; Release Eritrea, Christian Solidarity Worldwide, Church in Chains, Open Doors and Release International, highlighted the plight of thousands of Eritreans suffering in Eritrea on the count of the Christian faith and also drew attention to the worsening human rights conditions for all Eritreans. In attendance at the rally wererenowned Eritrean human and democratic rights advocates and activists from London and the Environs as well as members and supporters of the five organisations who have been relentlessly campaigning on behalf of the persecuted church in Eritrea.

Speaking on the general situation of the country and the people Dr Berhane Asmelash Director of Release Eritrea UK, highlighted the worsening situation across the board. This was followed by various speakers who highlighted the dire situations and prayers for an end to these conditionss were offered. At the conclusion of the rally representatives of the five organisations handed a joint letter outlining their concerns and calling the Ambassador to assist them by raising these with the government of Eritrea. 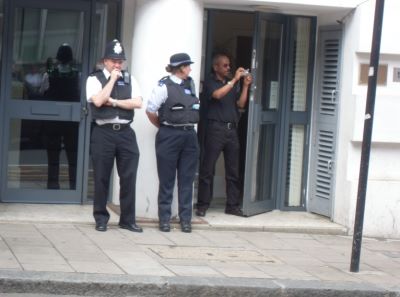 There was no immediate response from the ambassador or members of the diplomatic mission, however various unknown persons from within and outside the embassy building were photographing protestors and attempting to intimidate the gathering.