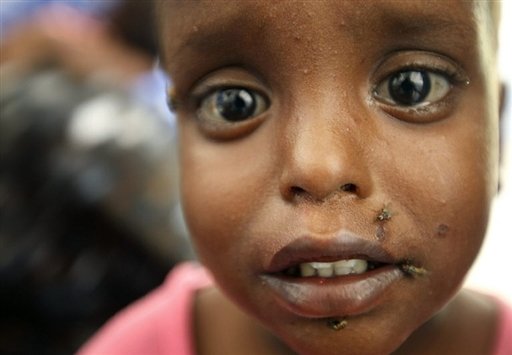 The ongoing combination of chronic food insecurity, conflict and political instability is threatening the well being and lives of millions of children in the Horn of Africa. An earlier predication by experts that unless urgent action was taken, millions more families could be made vulnerable is now a reality.

Already an estimated 19.8 million people, including four million children under the age of five, are in need of emergency relief assistance.  This is a substantial increase over the September 2008 figure of 14 million people requiring emergency assistance.

“Over the last few months we have witnessed a steady increase in the numbers of children suffering from acute malnutrition, which means more children are at risk of death and disease,” said Dorothy Rozga, UNICEF’s Deputy Regional Director for East and Southern Africa.” We are witnessing an all too familiar tragedy unfolding, and unless we act with much greater urgency the situation for children can only get worse.”

The combination of erratic weather patterns, the global economic crisis and heightened conflict and insecurity including the hijacking of ships off the Somali coast are all contributing to the emergency.

“We need to defy the status quo. We desperately need national governmentsto demonstrate strong leadership and fulfill their responsibilities to protect their poorest and most vulnerable,” said Rozga. ” We also urgently need international donors to provide funding to respond to the immediate impact as well as the underlying causes, while we in the relief and development sector, led by governments, need to find better ways to work with communities to mitigate their vulnerability.“Data collected from nutrition surveillance and feeding centers indicate growing numbers of children suffering from acute malnutrition, a condition which if not treated quickly can lead to death. In Eritrea, the “Bahari” rainy season, which normally arrives in October, was late and erratic.

In the Gash Barka and Anseba provinces of the country, rates of acute malnutrition were above the WHO emergency threshold of 15 per cent, and by February this year admission rates to therapeutic feeding centers were already two to six fold higher than in 2008.

In Ethiopia, given the late start of Belg rains and the approaching hunger gap, there are indications that poor food security and nutrition conditions in some parts of the country may get worse.

In Eastern Kenya, a major cholera outreach caused by poor water and sanitation is also contributing to acute malnutrition and mortality while in Somalia, acute malnutrition nationwide is above 18.6 per cent and in some areas as high as 20 per cent.

In Djibouti, the global acute malnutrition rate remains above the WHO threshold; between December 2007 and December 2008 there was in increased in the number of malnourished children in the country from 7,302 to 18,417 cases with children at highest risk in peri-urban areas of Djibouti City and the Northwest Region.

Access to safe water and sanitation is extremely limited in the region, making it highly susceptible to outbreaks of waterborne disease. Cholera and diarrhoeal diseases have been reported in Kenya, Ethiopia, Eritrea and Somalia, further threatening the lives of children.

In Kenya, between early January and mid April, a cholera outbreak affected more than 2,000 people in 20 districts. In Somalia the continued violence in Mogadishu has hampered access to cholera treatment and care. A major outreach of acute watery diarrhea has been reported in Southern Ethiopia.

UNICEF, working closely with humanitarian partners, is seeking to scale up assistance to reach the most vulnerable and ensure a full package of services, including provision of health care, access to safe water and sanitation, treatment for malnutrition, as well as child protection safety nets such as cash grants.

In Eritrea, for example, UNICEF is supporting the Ministry of Health in conducting supplementary feeding nationwide for 334,000 children aged between 6 and 59 months as well as pregnant and lactating mother in all six regions.

In Ethiopia, UNICEF continues to support the integration of case management of severe malnutrition into the national health care system by empowering health extension workers to treat children with severe acute malnutrition (SAM) at the village health post level. It also supports the work of NGOs to address SAM.

These efforts have resulted in a dramatic increase in overall treatment capacity for SAM in Ethiopia, from an estimated 20,000 cases per month in January 2008 to some 80,000 cases at any given time. This innovative system needs to be supported and complemented by UNICEF and other partners.

Yet so far this year for the Horn of Africa, UNICEF has received less than ten per cent of its projected emergency funding requirements of approximately $178 million dollars.

The countries covered include Djibouti, Eritrea, Ethiopia, Kenya, Somalia and Uganda, many of which without additional funding will be unable to continue these programmes and provide life-saving support to the millions of children and women in need.