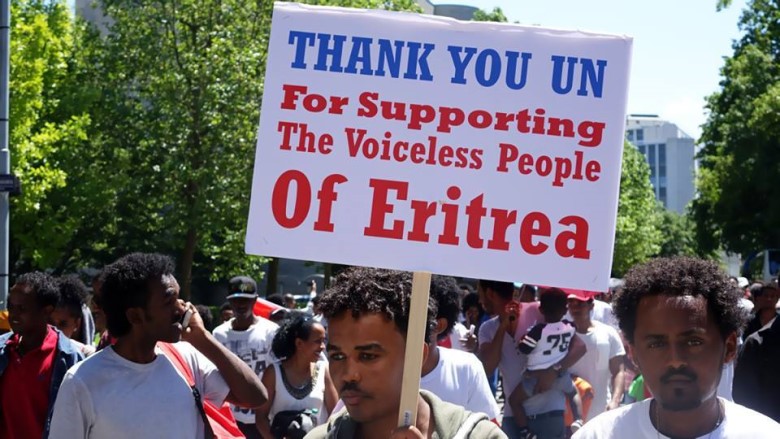 (Geneva 01-007-2016) The UN Human Rights Council today passed a resolution to refer Eritrea to all relevant UN bodies following a report, which established that crimes against humanity are being perpetrated in detention facilities, military facilities and other locations inside Eritrea.

The Report catalogued heinous crimes that include: enslavement, imprisonment, enforced disappearance, persecution, rape, murder, torture, and other inhumane acts. However officials of the regime in Eritrea denied all allegations and called for the Council to reject the report calling it ‘baseless’ and ‘politically motivated’.

Meanwhile tens of thousands of Eritreans from the large Eritrean diaspora had last week gathered in Geneva, TelAviv and Addis-Ababa, at rallies calling for an end to the culture of impunity with which Eritrean authorities have committed these crimes. Protestors called for their leaders, and particularly for the president, to be tried at the International Criminal Court. Many former conscripts of the forced indefinite national service,  were joined by former prisoners and families of disappeared politicians, journalists and religious leaders, during these marches.

The clear direction provided by the resolution, to send the report to relevant UN bodies for appropriate action, tabled by Djibouti and Somalia is a victory for the many campaigners and activists who have been relentlessly working to expose the human rights violation in Eritrea including thousands who travelled to Geneva last week to call for an end to impunity. For its part the regime, headed by Mr Yemane Gebreab, a senior presidential advisor, was tirelessly working to get the report rejected, tabling a counter resolution to that effect. Today’s decision by the Council renders that effort of no avail.

Welcoming the resolution, Selam Kidane, one of the organisers of the rally stated: ‘this is indeed a momentous move that will result in the eventual end to impunity, which we have been calling for. Crimes against humanity are being perpetrated in Eritrea as a means to instigate fear in the population and thereby prolong the tyrannical rule of Issias Afwerki. An end to this inevitably means the beginning of the end of that tyrannical rule and this we welcome with open arms, infact it is a long overdue move as far as we are concerned’.

The resolution that welcomed the report of the Commission of Inquiry, made several calls including, renewal of the mandate of the Special Rapporteur as well as a request for a the report and the oral updates to be submitted to all relevant UN bodies, for its consideration and appropriate action, including that those responsible for human rights violations, including those that may amount to crimes against humanity, be held accountable.

The Head of Eritrean delegation Mr Yemane Gebreab called the resolution a great injustice and called for its rejection ahead of the adoption which passed by consensus.

Satisfied that investigations established reasonable grounds to believe the culpability of officials at the highest levels of the state and the ruling party as well as commanding officers, the Commission has already compiled files on a number of suspects and those who were aiding and abating the criminal acts.

1. The COIE was set up two years ago to investigate crimes against humanity in Eritrea and presented its findings on the 8th of June 2016.