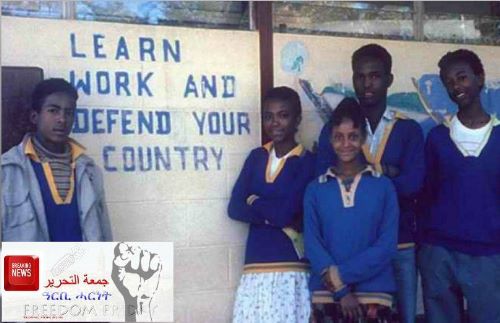 Adi keyih 05-03-2015) Arbi Harnet (Freedom Friday) sources have confirmed that, students in the city of Adi keyih have today challenged armed forces and police officers in the city.

The students mounted the challenge against  the regime’s security forces in response to an attempted demolition of residential housing in an area known as Deci milla (Aserte Shih), near Adi keyiH Secondary School.

Armed security forces were in the area to take demolition actions similar to those seen in Asmara and the surrounding in recent months; however the students who couldn’t tolerate the planned action retaliated and started attacking security forces throwing rocks and debris at them. The officials in charge, who clearly didn’t expect the level of retaliation, fled the scene having given instructions for security forces to put the retaliation under control using live ammunition. The shooting that ensued is said to have resulted in casualties including the severe wounding of the son of a martyred freedom fighter. Sources have also disclosed that the victim has been taken for urgent treatment to Asmara.

Students and other residents of the city are angry by the attempted actions and vow that they will carry on with their defiance and retaliation should the attempted demolition be resumed tomorrow or on subsequent days.

It is anticipated that General Philipos, who has taken over as Chief of Staff, after the death of General Gerezgiher (wuchu), might even visit Adi keyih to observe the situation.