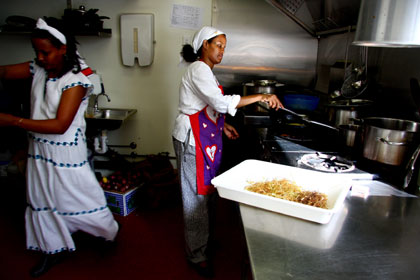 Marissa Calligeros
April 20, 2009 - 2:21PM
Venture 12 minutes from Brisbane's CBD to an arcade nestled within urban Moorooka and discover a slice of eastern Africa - and a testament to the virtues of second chances.

Take one step inside the arcade, inconspicuously positioned between a Commonwealth Bank and Vietnamese Bakery, and be enveloped by an aromatic bouquet of exotic spices, the frenetic colours of women's head dresses and the fervent chatter of languages - Arabic, Amharic and Tigrinya - spotted with the occasional English phrase.

Much like Chinese immigrants set the borders of Chinatown, Sudanese, Eritrean, Ethiopean and Somalian refugees have fortuitously laid claim to this slither along Beaudesert Road, unofficially christened "Africa Town".

The western suburb itself is home to just 394 recent African refugees, yet it has become an emblem of their homeland.

The streets surrounding the arcade are teeming with women draped in traditional dresses and head scarves carrying shopping bags ladened with fresh meats and vegetables; brothers and uncles sipping from espresso cups at wooden tables scattered along the curb; and children licking sherbet cones while skipping from store to store owned by their parents.

Ms Hassan, dressed in a sea-blue head scarf and matching floor-length dress, said she travels from her apartment in Eight Mile Plains to Moorooka twice a week without fail.

"I like to see other people who are from the same place as I am, whether they are [recently immigrated] or whether they have been here for a while."

"I moved to Townsville 12 years ago and then two years later I came to Brisbane and this is where I feel like I'm almost home again sometimes."

The suburb houses one of three refugee settlement flats in Brisbane's inner-south.

Mr Sesay, 51, sits in the back corner of the store twisting a reel of thin, white cotton around a gathered Tshirt, surrounded by a garden of tie-dyed shirts and dresses and lifelike batique paintings of safari animals.

"I never wanted to turn away from my skill when I came here, and finally I have a shop of my own," he said.

"Teaching my skills is what I love, so I hope that one day I can do that here."

Zac, a Sudanese refugee, who prefers only to be known by his fi rst name, runs the African Clothing Store, where fabrics in a kaleidoscope of vibrant colours, are draped from the ceiling and walls.

"When one African says to another African, `I am going to Moorooka', you know exactly where they are going. They are coming here," Zac said.

The shop and restaurant owners and their faithful customers share a passion for life, which is even more invigorating than the short, black espresso poured from charred metal saucepans.

Saba Abraham, 47, personifies this spirit. Her life as a freedom fighter in Eritrea has been emulated in her work encouraging female refugees and immigrants to get jobs.

She is the founder of the restaurant Mu'ooz, meaning tasty and healthy, which has a strict policy of employing only female refugees.

Ms Abraham stood in the middle of her restaurant, wearing a flowing white cotton dress trimmed with a multi-coloured African print, and described her sense of new-found freedom.

"Moorooka is my birthplace in Australia," she said.

The restaurant, located downstairs in the arcade, employs 22 African women via the Eritrean Women and Family Support Network.

"We are all women working together and we are cooking the food our mothers and grandmothers made," she said.

The restaurant's most recent employee escaped compulsory military service in Eritrea and fled to Australia just two years ago.

On the menu at Mu'ooz is delicious fermented flat bread - injera - which accompanies mild Eritrean and Ethiopean curries served on platter to share.

"Don't be mistaken," she said, "We face the challenges all women face when they work together in a small space."

Upstairs, laughter can be heard echoing from the pool hall - a sparse room with a wooden floor and a single ceiling fan - where 15 teenage boys crowd around two pool tables.

Kalayu Adame, 17, said he travelled from Beenleigh every Friday afternoon to join his friends for a social game.

"This is where everyone always meets up . . . no matter where you live in Brisbane," Mr Adame said.

On the street-side again, Ms Hassan walked from the Halal Butchery, carrying a bag filled with lamb cutlets and liver.

Her face widened into a smile as she greeted Ms Abraham.

"It's been a long time since Africans have had their shops in one area. A lot is happening nowadays, because we are embracing our culture again within the Australian culture and it's going to get better," she said.

"I'm thinking of opening a restaurant here, too."