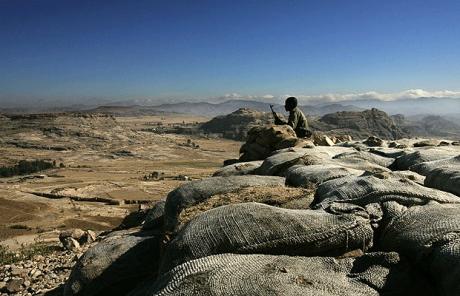 The US has warned Eritrea to withdraw support for a terrorist group linked to al-Qaeda
The Red Sea dictatorship has drawn the wrath of America by backing extremist Islamic groups in Somalia as part of a proxy war with Ethiopia, its former ruler.

It champions al-Shabaab, an al-Qaeda-linked group that American intelligence believes has trained a dozen of its own citizens to carry out attacks in the US.

President Obama's January inauguration was hit by FBI warnings about a potential suicide threat from 12 American citizens that had left Africa to infiltrate the US and disappeared.

Subsequently Washington quietly warned Eritrea, a former Italian colony which was occupied by Britain during the Second World War, it could suffer the same fate as Taliban-controlled Afghanistan in the wake of the September 11 attacks, if the plot was carried out.

"Eritrea has chosen the wrong path," said a source. "There are consequences for working with al-Shabaab when President Obama cannot afford to look weak on terrorism by not retaliating if there is an attack on the homeland."

But President Isaias Afewerki told the Daily Telegraph that he would continue to oppose an American and British-backed Somalian government that declared al-Shabaab its principal enemy when it took office in February.

While Western governments have growing confidence in the new government, led by Sheikh Sharif Ahmed, Mr Isaias diminished the new leader as a stooge.

He called for a fresh peace conference in which his allies would be granted a significant role. "There is no government, there is not even a nation of Somalia existing," he said. "There has to be an alternative solution. Attempts to impose this new government on Somalia will not work. Peace is not guaranteed without a government agreed by all Somalis."

Mr Isaias has not forsaken his broad opposition to American foreign policy. He mocked the use of Western military force to target Somali pirates off the Horn of Africa. "Addressing piracy with military force is not going to work," he said. "Piracy, like famine and drought is a secondary issue."

Mr Isaias presides over one of Africa's youngest but most isolated states– it gained independence from Ethiopia in 1993.

The 63-year old former guerrilla relishes a reputation as an international pariah. He was broadly condemned after Eritrea became the first country to invite Sudan's president, Omar al-Bashir on a visit following the International Criminal Court's decision to issue charges for crimes against humanity in Darfur.

"By being the first country to host General Bashir after he was indicted by the International Criminal Court, Eritrea put itself on the wrong side of history," said Andrew Mitchell, the Conservative's International Development spokesman, who used a meeting with Mr Isaias in Asmara to lodge a protest against the visit.

Few see any prospect of Eritrea repairing its relations with the West as long as it maintains a constant war footing against Ethiopia. Internal repression has grown steadily worse as it maintains a standing army of 300,000 from a population of just over four million.

The regime operates a system of National Service that has been described as a "giant prison" for people under 40. The thousands fleeing the country are viewed as deserters and dozens are shot attempting to cross the border.

Prisoners, including 11 parliamentarians that have disappeared, are subjected to horrific torture, including the so-called "Jesus Christ" – crucifixion on trees in the desert.

The Eritrean leader made no attempt to deny the practice of modern slavery or torture. He claimed the imperative of building the nation was his overriding concern.

"We are a small, young country in the process of making ourselves, you cannot compare our unique reality with other nations," he said. "We are the most stable and most prosperous nation in terms of age but establishing a nation on the continent of Africa is not easy."