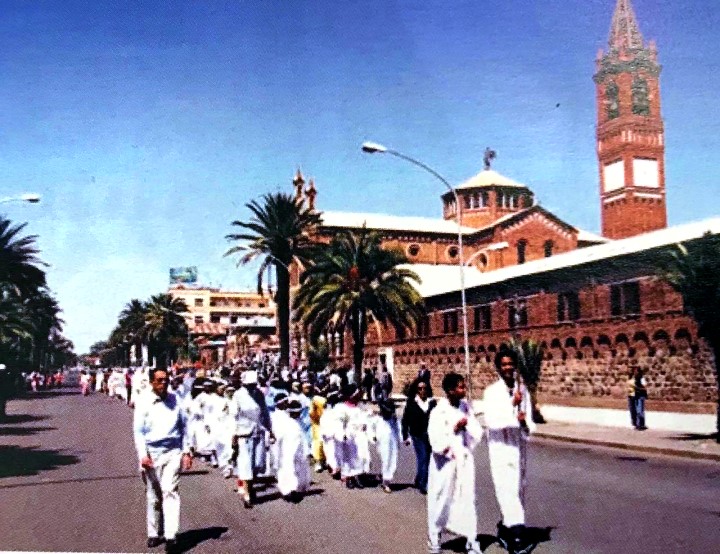 The Catholic Church of Eritrea is not only recognized by its imposing edifice of the Asmara Cathedral, but also by its well-educated clergy, numerous and varied religious orders, renewed forms of worship and for providing services to the people.

Why is the Eritrean government suddenly nationalizing parts of the Catholic institutions that provide crucial services to the public?

We can say that the government is vindictive because while there is no scope for freedom of speech in Eritrea, the church exercises its right to speak out.  One can say the government is petty because it has nothing else to do but hound those who are better organized and capable of resonating with public sentiments than its PFDJ fusiliers. We can also say it is mean-spirited because it is frustrated;  It is taking out its frustrations on the Catholic Church.

It is common knowledge that politics characterized by impotence and vindictiveness does nothing but robs the country of competent institutions that have what it takes to cause positive change in people’s lives. This short-sighted seizure of medical centers is a case in point.

When will the government ever learn of the perils of seizures and nationalizations?  The answer could be simpler than we think – it is very probable that the regime knows the end is drawing near.

The Regime’s control of Church affairs

In 2015, Pope Francis allowed the Eritrean Catholic Church to be established as an autonomous church with Asmara as its metropolitan see and the other three Eritrean eparchies as subordinates, separating it from the Ethiopian Catholic Church.

It is to be remembered that four Catholic bishops, representing the four eparchies, issued a pastoral letter in 2014 - a letter that was somewhat critical of the Government. The bishops spoke of the plight of the fleeing Eritrean youth.

“If one's homeland is a place of peace, jobs and freedom of expression” the letter stated, “there is no reason to leave it to suffer hardship, loneliness and exile in an effort to look for opportunity elsewhere.”

According to UNHCR report, more than a fifth of Eritrea’s six million people have fled the PFDJ regime, where all men are conscripted into indefinite military service. Tens of thousands of Eritreans have crossed the southern border to reach Ethiopia this year; and large numbers continue to risk their lives to cross deserts and the Mediterranean in search of a better life in Europe.

Again, the bishops bravely and constructively addressed the 2018 “Joint Declaration of Peace and Friendship” between Eritrea and Ethiopia.  “The country needs God’s intervention,” they stated, acknowledging that Eritrea is going through severe tests.  They said they would pray that Eritrea achieves reconciliation founded on peace and justice.

It seems that the regime is not only bent on appropriating the Church’s service oriented mission and its property, but, through such radical seizures, is trying to redraw the boundaries between church and state by putting a stranglehold on its activities.

Why can’t the regime see the Catholic Church's uses for society?  Shouldn't it appreciate the cost-saving benefits the church brings into the national economic formula – by running hospitals and schools? The regime’s disdain for, not only the Catholic Church but also other faith institutions, is becoming ever more apparent.

Well, good luck to the Catholic bishops who have recently written to the Ministry of Health stating that the mission of the church has always been affiliated with providing services to the people, never to do battle with the government.  They have achieved a big moral victory here, but … how can one stop a troubled government that is itching to do battle with religious institutions?