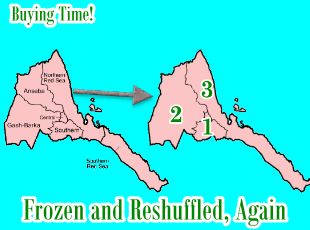 Sources from Asmara (Eritrea) indicate that the Afwerki administration has been on a panic mood since the day the UN has passed the resolution to impose sanctions on Eritrea. President Isaias Afwerki has fallen into old proven tactics that served him well in times of crisis. Information leaked out from Colonel Tesfaldet Habteselasie office (President’s Office) indicate that as a number of people that have been sidelined for a long time (in the Orwellian language of the PFDJ ruling party, “frozen”) are being “reactivated” to resume important posts, various reshufflings are also being made.

Musa Raba, one who has been “frozen” is appointed to be the Administrator of Gash-Barka. Brigadier General Tekie (aka Blata) who has been the Head of Sports has been relegated in a minor post at the Air Force Administration. It is believed the recent defection of the national soccer team has to do with his falling out of the President’s favor.

The names of more individuals will be provided as soon as we verify them.

Some officials are saying the reason behind this consolidation is that the number of generals that the President trusts in giving them regional administrative powers is shrinking. Again, as we get more details, we will provide names.

Sources in Asmara have also indicated that Preisdent Issias Afewrki had a secret meeting with Muammar al-Gaddafi on January 11, 2010. As soon Asmarino has verifed the information we will provide you with additional Information.