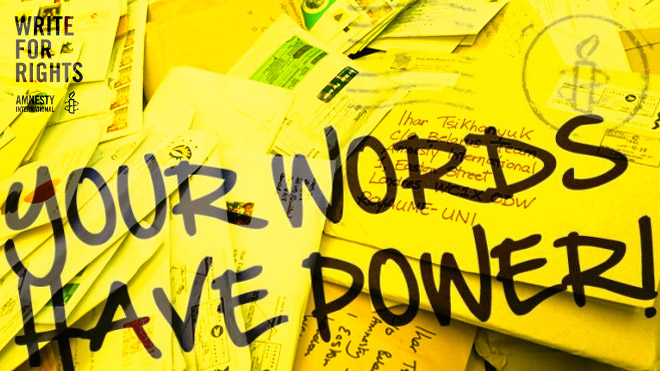 Asmarino.com has learned that Amnesty International (AI) has launched a letter writing campaign on behalf of Eritrea’s prisoners of conscience.

Amnesty International is the world's leading human rights organisation, campaigning against injustice and inequality everywhere. Its purpose is to protect individuals wherever justice, fairness, freedom and truth are denied. With these values at its heart, it has stopped torture, freed prisoners, prevented executions and saved homes.

We may ask ourselves why it is important to help this powerful movement by joining it. “AI’s work has resulted in the Universal Declaration of Human Rights.  And now AI seeks to implement and protect it. These statutes are important because they are based on necessities such as fairness, equality, dignity and respect.”

On this occasion, Asmarino.com extends its gratitude and appreciation to AI for the steady campaign it has been conducting against human rights abuses in Eritrea.

We urge Eritreans to join AI and take time to send this letter to President Isaias Afwerki as soon as possible.

Meskerem is a month of celebration and symbolises change, thanksgiving and renewal.  It is also the month when we especially remember those who ‘disappeared’ into your prisons eighteen years ago.

On 18th September, 2001, Aster Fissehatsion, who had served her country so well was arrested for asking for more democracy.  Ten others ‘disappeared’ on the same day.

A few days later, Dawit Isaak, Seyoum Tsehaye, Ammanuel Asrat, Medhanie Haile, Fessahaye Yohannes, Dawit Habtemichael and Idris Abu’Are were also arrested for working as journalists. In the following years, others have also been imprisoned without trial.  We ask you to release these individuals so that their many friends and family can truly celebrate Meskerem.