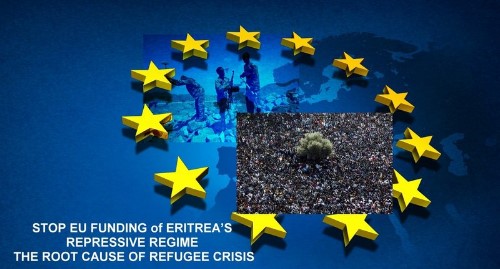 This is to express our profound opposition to the European Union’s current plans to provide a multi-million development package to the government of Eritrea, a regime that is the cause of the mass exodus EU is trying to control.

Over the last two decades, the government in Asmara had become so repressive that thousands of Eritreans decided to flee in search of shelter abroad. Only in June of last year, the government’s brutal treatment of its own people prompted the Human Rights Council (HRC) to launch the International Commission of Inquiry on Human Rights in Eritrea.

An interim HRC investigation indicated that: “Most Eritreans have no hope for their future: national service, whether in a military unit or in a civil assignment, is the only thing that from the age of seventeen they can expect to spend their life doing – paid between less than one and a maximum of two dollars a day."

According to the Commission, “The Government has curtailed most freedoms, from movement to expression; from religion to association. It has created a condition in which individuals feel that they have hardly any choice with regard to the main decisions in their lives: where to live, what career to pursue, when to marry or who to worship."

Offering more funds to a government with a lengthy and consistent track record of egregious human rights violations will only exacerbate the refugee crisis.

It should be recalled that the European Union had approved 122 million Euros in a similar aid package to the nation in 2007.

Ironically, EU’s good will gesture toward the government notwithstanding, the regime continued to subject the population to untold cruel and inhuman punishments, including “[E]xtra-judicial executions, enforced disappearances and incommunicado detentions aiming at silencing all perceived critics and teaching a lesson to them and others – because you are never really told why you are arrested, and once you have been arrested, for how long you will be detained and where.”

EU’s plans to afford new funding resources will allow the regime to carry out its ruthless polices with impunity, using the pretext of “No peace, No war” with Ethiopia to perpetuate a perennial National Service, a policy which in essence enslaves the youth while keeping them hostage. As enslaved hostages are bound to do, the youth will either storm out of the country or be targeted by the regime’s shoot-to-kill policy. Those that ultimately end up in Europe are—as we all have painfully witnessed time and again--only the survivors of a treacherous journey that claims the lives of thousands of men and women, children and the elderly.

While we agree on the need to address the refugee crisis as urgently as possible, we should also be mindful that the Eritrean government is singularly responsible for the mass immigration of the population from the country. When not brutalizing its own people, the regime is prone to wreak havoc elsewhere. Isolated from the international community and marginalized in the region and beyond, the Isaias regime has repeatedly drawn UN sanctions for playing a destabilizing role in the Horn of Africa.

Instead of rewarding such a brutal dictatorship with new funds, a humane and practical EU policy should use the same funds to avail food, shelter, counseling and transitional assistance to refugees in desperate need of help.

Just as importantly, the funds should also be utilized to send a clear and unequivocal message to Asmara, declaring that EU stands squarely behind the Eritrean people in their struggle to remove from power and bring to justice key members of the tyrannical regime.

A new and democratic government in Eritrea can be expected to help resolve the current border stalemate with neighboring Ethiopia and urgently bring an end to the much dreaded National Service, the primary cause of the mass exodus from Eritrea. Only then can EU expect Eritreans to stay at home and become productive citizens in their own country.

Dear Eritreans and Friends of Eritrea,

Please sign the petition  which will be formally presented to EU asking them not to reward by providing funds to a regime that is singularly responsible for the exodus of Eritreans from their beloved country.

The following is a list of Eritrean Civic and Opposition Organizations as well as individual Co-sponsors of the Petition.

Let us know if you would like your organization listed as a co-sponsor.

Russom Mesfun
This email address is being protected from spambots. You need JavaScript enabled to view it.