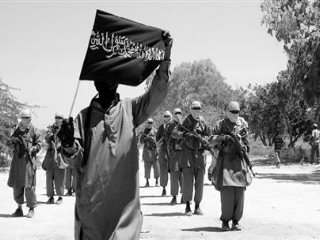 Below, you will see a report by Raffaelo Pantucci (03/19/2010) that states both Canada and Britain, following the example of Australia, Norway, Sweden and the United States, have now added Al-Shabaab to the list of proscribed terrorist organizations. Implied in this proscription is: “It will now be illegal to fundraise or support al-Shabaab in both nations.”

Eritreans in Diaspora who support the Isaias regime might say, “So what?” Well, at least, they cannot say now they have not been forewarned. The UN has clearly established that Eritrea is the main financier and supporter of Al Shabaab, a close affiliate of Al Qaeda, in the region. And we know where all the money is coming from: from Diaspora Eritreans. Various fund-raising schemes, from 2% “taxes”, to festivals to me’kete fundraisings are used to generate hard currency for the regime, which in turn it uses to support all kinds of terrorist groups in the region. The indirect nature of this money flow doesn’t exculpate the source of this illegitimately procured money, especially now that the link has been made clear for everyone to see.

One effective means that the US government has used to weaken many terrorist organizations in the Middle East is to choke every source of income that used to reach them through various “humanitarian” fund-raising events conducted in the West. Many of those who were contributing money in these events didn’t even realize that their money was to end up in the hands of terrorists. The same holds true in the case of the many fund-raising events conducted in the name of various humanitarian causes by Eritreans in Diaspora. What is undeniable is that all this money ends up in the PFDJ (the ruling party in Eritrea) coffers. After that, a substantial part of it is spent in harboring, training, arming, maintaining and transporting all kinds of terrorists throughout the region. So it is only logical that the US and other Western nations should target all these fundraising events, and close them down for good.

Many supporters of the regime in Diaspora want to have it both ways. They know that their money is being used to aid Islamist groups in Somalia, but since they share their government’s conviction that the only road to the destruction of the Melles government in Ethiopia is through Somalia, they don’t mind if their money ends up in terrorists’ hands. At the same time though, they don’t want to jeopardize their comfortable life in the West, so they are claiming that their money is only meant to help Eritreans. But this belies the evidence, for their money is not given to independent humanitarian groups; it goes directly to the coffers of the regime. It is only appropriate then that these Eritreans be aware of the level of risk they are involving themselves with these illegal fundraisings.

To give one example of the risk involved in these innocuous-looking fundraising, let’s take a look at one “alleged plot” mentioned by Raffaelo Pantucci in his report:

“… Its [Al Shabaab’s] influence can increasingly be seen abroad; examples include an alleged plot to target Secretary of State Hilary Clinton when she was visiting neighboring Kenya in August 2009 …”

In our editorial, UN traces Missiles that Hit Belarusian Aircraft to Eritrea, we brought attention to the danger brought to the region [both the Horn and East Africa] by the wanton and reckless proliferation of easily portable yet very sophisticated shoulder-fired anti-aircraft missiles – the SA-18 Igla – that have been generously provided by the Asmara regime to Al Shabaab, Hizbul Al Islam and other terrorist groups in Somalia. We also warned that these missiles could be easily used to down civilian aircraft in international airports in the region, specifically Nairobi and Addis-Ababa airports. It wouldn’t surprise us if what had emboldened the Al Shabaab’s “plot to target Secretary of State Hilary Clinton when she was visiting neighboring Kenya in August 200” is the ready availability of these lethal missiles in their hands.

The effectiveness of these missiles cannot be underestimated. When Russia was entertaining to sell these missiles to Syria in 2002, Israel was so worried that it conducted a diplomatic offensive to stop the sale:

“Agence France-Presse reported in late October that Israeli Prime Minister Ariel Sharon had successfully talked Russia out of selling Syria Igla (SA-18 Grouse) man-portable air-defense systems (MANPADS). The report said that Sharon had made the request of Russian President Vladimir Putin during a September visit to Moscow. Syrian forces are already equipped with earlier Russian MANPADS, Strela (SA-7 and SA-14) and probably Igla-1 (SA-16), the latter of which is conceded to be on par with the US Stinger. But the SA-18's infrared (IR) …” (Russia won't supply Syria with SA-18. Journal of Electronic Defense, December 1, 2002, Michael Puttre)

Imagine then what Russia was unwilling to sell to Syria recklessly provided by the leader of Eritrea to all kinds of terrorist groups in Somalia.

But to come to our main point: The hard currency strapped, dirty poor regime in Eritrea would have never succeeded in providing financial, military and other kinds of support to all kinds of Islamist terrorists in the region had it been for the money that keeps flowing from Diaspora Eritreans. The price of scores of SA-18 Igla could easily be raised in one night of mekete (fundraising events) in Seattle, Toronto Stockholm, London, Melbourne or Oslo – all of which are to be found in nations that have listed Al Shabaab as a terrorist group to be proscribed.

It will not be long before these nations began to close in on the Eritrean regime’s accomplices that are consciously working against the interests of their host countries. All that one needs to do is to visit one of their websites – dehai.org will do – to see that their language of hate in vilifying the West, in general, and the US, in particular, has reached a hysterical level. We know that appeal to the conscience of these Eritreans doesn’t work. After all, they know that long before their money began to terrorize the region, it used to terrorize the poor Eritrean masses back in the homeland. Instead, we are appealing to their self-interest. Our advice amounts to this: stop funding terrorists or jeopardize the freedom you are enjoying in your host countries!

Below, is the full repot by Raffaello Pantucci

Al-Shabaab Proscribed in Canada and the United Kingdom

In the first week of March, the British and Canadian governments both added the Somali al-Shabaab group to their respective list of proscribed terror groups. [1] The decisions mean that it will now be illegal to fundraise or support al-Shabaab in both nations, while Canadian Minister of Public Safety Vic Toews specified, “The Government is taking this step to help protect Canadian families from the activities of this organization. The Government received reports from the Somali community that al-Shabaab has attempted to radicalize and recruit young Canadians. The listing of al-Shabaab will help the Government of Canada to better support the Somali community of Canada.” [2]

The respective decisions follow previous proscriptions in Australia, Norway, Sweden and the United States. They reflect a growing trepidation amongst Western governments regarding the growing threat from the Somali group – in particular their ability to attract young men with local passports to their cause and the movement’s growing regional assertiveness. Furthermore, reports indicate that the group appears to be increasingly attracting fighters from the Somali diaspora and other sources in the West (Independent on Sunday, September 13, 2009; see Terrorism Monitor, January 14).

For Canada and the United Kingdom in particular, the decision to proscribe follows a series of stories indicating that steady streams of young men are going abroad to fight in East Africa. In autumn 2009, a group of six young Somalis disappeared from their local community in Toronto, with reports suggesting they had ended up fighting in Somalia (National Post, December 12, 2009). A report from earlier in the year in the U.K. indicated that most recently “almost a dozen” British Muslims had left the U.K. to join the Shabaab in Somalia, including some students from the prestigious London School of Economics and King’s College London (Sunday Times, January 24).

Furthermore, plots have emerged from the Somali diaspora community in both nations; at least two of the attempted bombers and a substantial number of the support network involved in the July 21, 2005 plot to attack London’s public transport system were of Somali extraction. In Canada, two Somalis were among the 18 suspects arrested for planning a series of bombings and assassinations in Toronto and Ottawa (National Post [Toronto], June 5, 2006; September 21, 2009; see also Terrorism Focus, June 6, 2006). [3] However, in neither case was the al-Shabaab group implicated in any way, nor was Somalia a feature on the broad canvas offered by each plot. Rather, individuals from the diaspora were drawn into plots fostered by local networks to prepare for large-scale domestic attacks.

More recently, however, there has been a greater law-enforcement focus on Shabaab. Aside from the Toronto cells, the RCMP and FBI ramped up their efforts after an informant told overseas U.S. embassy staff that a group of Somalis had crossed the border from Canada with the intention of launching an attack on President Obama’s inauguration ceremony. The information proved to be a hoax, but it highlighted the reality of security concerns (CanWest News Service, February 4). [4] In the U.K., on the other hand, the government attempted to shut down what it believed was an al-Shabaab fundraising and support network last year, though the case against the two Somali-Britons did not stand up in court (Press Association, July 28, 2009).

Beyond this, there is a clear sense of growing trepidation surrounding Somalia’s al-Shabaab; its decision to formalize the connection to the Ras Kamboni group, the declaration of allegiance to al-Qaeda and its connection to al-Qaeda operative Saleh Ali Saleh Nabhan (killed by a U.S. Special Forces raid in September 2009 while helping train Shabaab fighters), all point to a strengthening network (for Ras Kamboni, see Shabelle Media Network, February 1; Garowe Online, February 2; Terrorism Monitor, February 10). Its influence can increasingly be seen abroad; examples include an alleged plot to target Secretary of State Hilary Clinton when she was visiting neighboring Kenya in August 2009, the recruitment of Somali youths in Minneapolis, the attempted assassination of Danish cartoonist Kurt Westergaard and an alleged plot to attack a military base in Melbourne (see Terrorism Monitor, January 14; Terrorism Monitor, September 10, 2009).

As of yet, no major plots appear to have been hatched in the West drawing specifically on this network and direction from Somalia. However, given previous experiences of threats emerging from radicals with Western passports associated with groups fighting abroad, as well as the rather abrupt shift from the near enemy to the far enemy by the previously regionally-focused al-Qaeda in the Arabian Peninsula (AQAP), al-Shabaab is clearly a threat that needs to be watched with some care. The respective proscriptions give British and Canadian authorities further legislative tools to deal with this threat.

3. Of the “Toronto 18,” seven suspects have pled guilty or been convicted, seven have had their charges stayed and three remain to be tried.

4. The alleged plot was first described in Martha Joynt Kumar, “The 2008-2009 presidential transitions through the voices of its participants,” Presidential Studies Quarterly