A SPECIAL REPORT: PART I 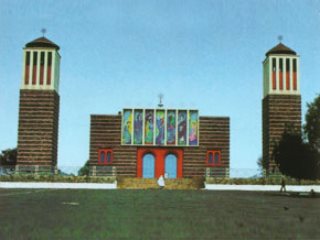 ICFC has learned that since the Eritrean Government revoked the exemption of all Orthodox clergy (priests, deacons and monks) from military service and ordered their conscription in July 2005, over 1400 known Orthodox priests and deacons have been forced into the military. The research unit of ICFC, in cooperation with persons who are well placed to have access to classified information, has undertaken a study to document efforts by the government to destroy the Eritrean Orthodox Church. The following is a preliminary report on an ongoing and thorough investigation.

In 1997 a letter was circulated within the office of the Ministry of Local Government - at the time headed my Mr. Mahmud Ahmed Sherifo who has been in prison since September 2001 and presumed dead. The letter contained a decision for the exemption of all clerics from serving in the military. By the Beginning of 1999, all clergy were issued identification cards exempting them from the country’s obligatory military service.

But by 2002, the government’s attitude towards religion in general took a decisive turn for the worst. Just prior to the proclamation outlawing many evangelical churches and other sects on May 17, 2002, the government began the process of taking over (nationalizing) the country’s oldest and most influential institution – the Orthodox Church. The singular event that signaled this ominous development was the installation by the government of a political appointee, Mr. Yoftahe Dimetros, as the General Administrator of the Church. With this act, the government essentially put the Synod of the Church under its full control. Yoftahe became the one person responsible for the implementation of the government’s total control of the church.

The one individual who took an uncompromising stand against all encroachments by the government in the affairs of the Orthodox Church was its patriarch, H. H. Abune Antonios. In order to weaken the Patriarch’s opposition, however, the government orchestrated the arrest of all the leading clergy in the Orthodox Church and defrocking scores of others, leaving the Pontiff isolated.

Then, a circular letter, dated July 4, 2005, was issued by the Religious Affairs Department of the Ministry of Local Government. This crudely written circular officially revoked the exemption of all clergy from military service, and ordered all able-bodied priests, deacons and monks within a wide-range age group to report for military service.

By the end of 2005, having completely weakened the authority of the Patriarch through the arrest and defrocking of a large number of capable clergy, and having brow-beaten all the members of the Synod into submission, the government then moved against the person of H.H. Antonios himself by announcing his “removal from all administrative duties.” In January 2006, he was put under house arrest. He hasn’t been seen or heard from since.

The past four years have seen the reducing of the Eritrean Orthodox Church to mere arm of the Department of Religious Affairs. The historical artifacts and ancient manuscripts of the Church were all declared as “the property of the Eritrean people”, and have been removed from churches and monasteries. The finances of the church also fell under the control of the Department of Religious Affairs. According to associates of ICFC, the forcing of over 1400 priests and deacons into the army has had deleterious effects on the future of the Eritrean Orthodox Church. Others chose to flee the country than joining the military. The number of those who fled is in the hundreds.

While many of the churches in the larger cities are still able to continue their ministry, numerous Orthodox Churches in rural Eritrea are devastated by the severe shortage of clergies resulting from the above policy. According to the result of ICFC’s research, numerous examples can be cited of churches that have closed their doors as a result of the government’s pernicious and deliberate plans to depriving the Orthodox Church of priests.

What makes the policy of the government even more dangerous for the future of the Eritrean Orthodox Church are the government’s efforts to completely deprive the institution of future priests by conscripting ALL deacons and priests younger than age fifty into an interminable military service. It is the young deacons who traditionally become future priests. The calculus of the government’s policy, therefore, is very simple: no deacons = no priests = no churches.

If this dangerous policy is not reversed immediately, and the disruptive blow that has been inflicted on the church is rectified, one ICFC researcher who participated in the study concludes that more than half of the 1500 Eritrean Orthodox churches in the country will be closed permanently within just two decades. This is an immense demographic catastrophe waiting to happen. Many things can be said about the ruinous ramifications of the government’s policies for the future of the country. But the destructive policy of the Eritrean government against the church will leave behind one of the most insidious and catastrophic legacies, namely, the ruining of the Eritrean Orthodox Church.

ICFC denounces the regime’s pernicious designs to bring about the EOC’s extinction - this time through wholesale conscription of its clergy in the army and in denying the Church from continuing its tradition of priests-in-apprentice to develop its future clergy. This was the only way the EOC has assured itself its continuity for over one and a half millennium.

The government of Eritrea has received world-wide condemnation for its savage persecution of Christians and other religions. Eritrea is one of 8 countries designated by the US State Department as a CPC (Countries of Particular Concern) for its flagrant denial of its people freedom of worship. Many churches have been ordered closed since May 2002. Nearly 3500 Christians are languishing in prisons. Many have died there; and tens of thousands have fled the country. Scores of church leaders, including the Patriarch of the Eritrean Orthodox Church and several priests, remain in prison.

"ICFC is the website of Saint Athanasius Charitable Society (SACS), a human rights and charitable organization dedicated to the advocacy of religious freedom and for those who are in chains for their faith in Eritrea. For more on religious persecution in Eritrea, visit: www.InChainsForChrist.org"