In an interview on BBC’s ‘Focus on Africa’ program (Dec.4, 2013), Tesfamichael Girhatu, the Eritrean ambassador to the UK, attempted to sell the idea that Eritrean youth leaving the country in droves were victims of “conspiracy against Eritrea” and not of his government’s overzealous and outrageous policies. Indeed there is emerging consensus within the international community that some of his generals (e.g., Brig. Gen. Kifle "Manjus") are colluding with human traffickers in the Sudan and elsewhere. But according to Ambassador, there are in every major city in the world, human traffickers who conspire to take Eritrean youth out of their country. There is, he continues, an international conspiracy to empty the country of its youth. The Eritrean regime has been saying this nonsense for years, a claim which has no basis in reality, no evidence has been provided by his government to support their claims. We of course know the regime's games very well now. It is all lies! But as the Tigrigna saying goes, 'repeated lies appear true'. 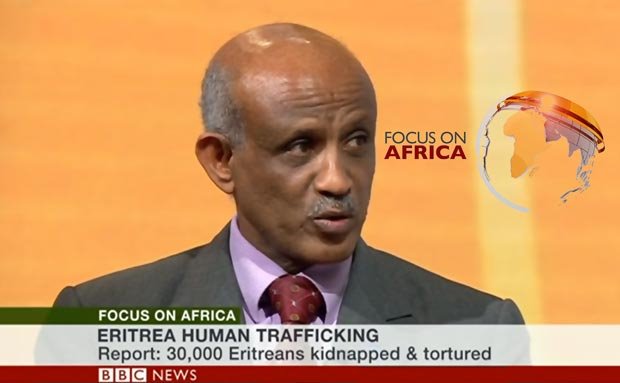 The facts are that the country’s current situation is forcing its people, the youth primarily, to leave the country in order to seek better opportunities of employment, education, and life in general. By deflecting attention to some non-existent "international conspiracy", the regime is attempting to cover up its abject failure in providing even basic services to its citizens. For example, there is no regular electric service in Asmara these days. Sometimes it takes 24-48hrs to get a few hours of electric service. Asmara most of the time is dark at night. This didn’t even happen at the height of Asmara’s siege during the war of liberation in the 1970s and 1980s. (Ethiopia is selling excess power to neighboring countries and has, reportedly, offered free electricity to Eritrea, which the latter has refused accusing Ethiopia instead of attempts at bribery while the border dispute remained unresolved). Recently, the self-appointed president, Isaias Afwerki, when asked about running water services, another short commodity in the city, he arrogantly and ignorantly told the people that “you’re supposed to go where the water is, the water does not come to you”. No, seriously, that was his answer to the question! I wanted to shout, “The people of Eritrea are not cattle, you freaking arrogant, sadistic SOB!”.

Amb. Tesfamichael also said, in the same interview with “Focus on Africa” that there is no problem of freedom of speech in the country. How long are these people to continue to lie about Eritrea’s dire situation with such absurd claims. Its youth are leaving the country in droves because they have no hope for the future in Eritrea. If they are not kept in the army perpetually as in the so-called “national service” of endless years, not the eighteen months initially the regime promised them, they cannot hope for any meaningful work to help their families. Forget freedom of expression! There is no freedom of movement. There is so much restriction, you can’t even move around the country without being stopped, harassed and terrorized are better words to for it. There is NO justice for those who might get arrested for a variety of reasons, mainly political. No one of those imprisoned twelve years ago for political reasons has been brought to a court law, NEVER! Most of them have reportedly died in prison, both the veteran fighters (G-15) as well as the younger journalists. There is an independence war hero (Brig. Gen. Biteweded) who was jailed for protesting some decision by the president back in the early 1990s, and he is still in prison twenty+ years later.

And yet, just less than two months after 335 or so Eritreans perished in the Mediterranean sea trying to reach Europe after fleeing their homes in Eritrea, Amb. Tesfamichael continues to tell the world a bunch of lies about his government being just a victim of a conspiracy. Where does Isaias Afwerki find such spineless, soulless people to do his bidding? The Ambassdor’s ‘halewlew’ (innuendo) would have been funny, if it weren’t so tragic what is happening to the Eritrean people. He has been told to say his halewlew or else, I am sure, he would lose (frozen out) his coushy job. Spineless that they are, people like him, continue to serve an arrogant, sadistic dictator while living their lives unmolested in civilized London, Washington, or even Addis Ababa as Girma Asmerom, another spineless messenger of the dictator, was doing his own halewlew last month from the halls of African Union (AU) in Addis.

While South Africa mourns and celebrates the passing and the life of their "greatest son", Eritrea's worst sons and daughters (its PFDJ leaders) are still lying to the world about their sadastic dictator, who is incapable of learning anything from great people such as Mandela in the past twenty years. What a shame!