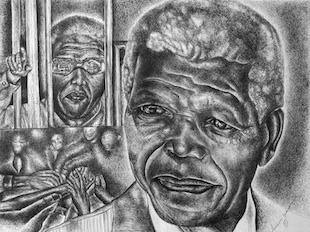 Today Nelson Mandela is acclaimed as one of the greatest personalities of our times. He belongs to that category of men who have graced our civilization with their personal charisma and noble contributions.

His life long fight for the cause of freedom in South Africa and its eventual success will be written in golden letters in the annals of history. His entire life epitomises man’s unquenchable thirst for freedom.

During the period of college studies he came into contact with modern principles of freedom, liberty, democracy, equality, political rights, etc. He was deeply distressed to see the sufferings of his fellow Africans, who were no better than slaves under the British, who had occupied their country since 1652.

Their cruel oppression of his people broke his heart and Nelson Mandela infused with the ideals of liberty and democracy took up the cause of national freedom as a student and joined the African National Congress (ANC), a small organisation which had been set up on similar lines as the Indian National Congress in India. Within a few years Nelson Mandela became its foremost leader and spokesman. ANC challenged the racist political system of apartheid, in which black Africans were legally discriminated against, in all walks of life. ANC under Nelson Mandela’s leadership organised labour strikes and nationwide protests and demonstrations against apartheid during the 1940s, 1950s, and 1960s.

Their efforts were met with cruel resistance, torture and shedding of much African blood. Nelson Mandela and other key leaders of ANC were arrested and charged with treason. In 1964, onwards Nelson Mandela was imprisoned in the famous Robben Island, where he spent 27 years.

During the 27 years that he was in jail he became the source of inspiration and example. Thousands and thousands of Africans joined the nationalist movement for freedom forcing the white rulers to give up apartheid and release their beloved leader which they captured in 1990. In the first free election that followed in 1994 ANC under Nelson Mandela won the election and he was chosen to lead the country as its First Black African President.

Nelson Mandela’s greatest achievement was not so much in becoming South Africa’s first black president as putting an end to the evil of apartheid which divided blacks and whites of South Africa. He ushered in the history of South Africa an era of social harmony, national unity, democratic governance, and building the national fabric from the scars of former regime.

His simple principles of political agitation almost on the lines of Mahatma Gandhi, healing the wounds of hate, bringing about national unification, becoming the symbol of the oppressed people all over the world etc. are some of his noble legacies to the world.

Nelson Mandela, popularly known as ‘Madiba in South Africa, is a household name all over the world. Though retired from active politics, his ‘voice’ continues to echo in our world wherever and whenever freedoms of people are threatened and chained.

“His life has almost mirrored the journey of an entire people; a remarkable journey of hardship, struggle and now liberation”

Mr. Mandela, you will never be forgotten.... the candles are forever lighted in your honor.

The years you shared have been full of joy. The memories and the legacy will go on and on. You lit up our life, our hopes, and our dreams. You’ve opened our eyes to see what it all means. So now that you're gone how can we forget; because you were the greatest out of all time.

May you rest in peace.